This week….The President and Billionaires Fight to Destroy Science and Veto the Future | EV & N – 307 | CCTV 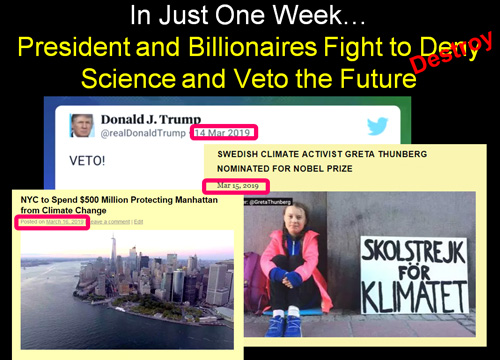 Through budget cuts, personnel changes and mobilizing “industry scientists” with questionable credentials and little experience the President and the GOP are destroying science for the pursuit of increasing immediate profits in the extractive fossil carbon industries of petroleum, coal and natural gas.  At the same time they are actively de-funding and seeking to destroy any programs that seek to identify and address the human cost of climate change within the United States and around the world

In a global response of outrage school children across the world have drawn inspiration from the example of Greta Thunberg — who, at the age of 15, began a “school strike” in Sweden to protest the inaction of government officials to the global climate crisis.   Greta has traveled throughout several countries in Europe, and her message has spread as well to Australia, the United States and beyond.

In every one of her talks it is clear that she does not hold out much hope for the current political leadership to be able to address the global climate crisis.  She is calling instead for a massive change in public consciousness to begin with school children.  Gone are the customary statements of confidence “in the future generations,” etc.   She states baldly and boldly that adults have failed the human community and that it is time for a radical change at all levels of the human community.

By the end of February 2019, her message of radical realism had been heard and amplified at “Global Engagement Summit” at the United Nations Association (UNA) in the U.N. Headquarters in New York City.

On 15 March 2019, an estimated 1.4 million students walked out of class in over one hundred and twenty countries around the world to protest the effective suicidal shutdown of governments around the world in the face of the climate crisis.  By the end of the week of the “Ides of March” Greta Thunberg had been nominated for the Nobel Peace Prize in recognition of her courageous, simple and insistent campaign to save the planet. 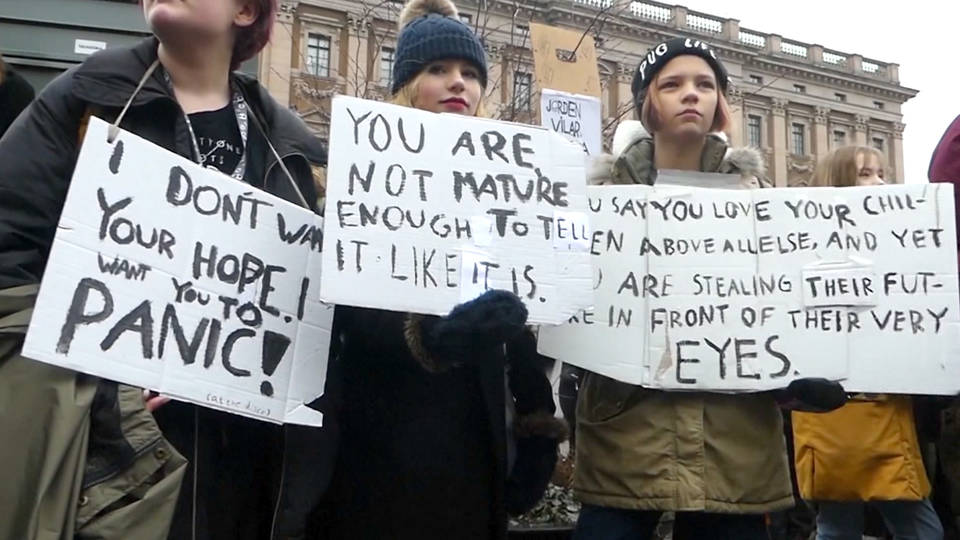 Students around the world left the classroom and took to the streets Friday for the “Youth Climate Strike,” calling for decisive action on climate change. The international day of action was inspired by 16-year Swedish activist Greta Thunberg, who started a weekly Friday strike outside the Swedish parliament building last year. This is Thunberg speaking at the Stockholm demonstration.

Tasnim Emu: “My name is Tasnim Emu, and I’m from Urban Assembly Institute of Math and Science for Young Women. … They say that education isn’t worth sacrificing to make a political point. But I think they’re wrong, because we’re all here going to school, and we think that we have this big future for us, but our education will be ignored if we’re too busy trying to survive instead of living.”

Later in the broadcast, we’ll speak with a high school student from the Bronx High School of Science.

Up to 1.4 million children around the world took part in a global climate strike on Friday to demand world leaders do more to address the dangers of climate. The mass protests were sparked by 16-year-old Swedish climate activist Greta Thunberg, who has skipped school every Friday to sit outside the Swedish parliament to demand leaders act on climate change. Democracy Now! was in the streets of New York City on Friday with the young activists. We speak with 18-year-old Alysa Chen, one of the organizers of the walkout at New York City’s Bronx High School of Science.

Students across the globe to skip school for climate change strike

The White House has revealed its $4.7 trillion budget proposal, which includes $8.6 billion for the border wall as well as cuts for domestic programs. CBS News chief Washington correspondent Major Garrett joined CBSN with details on what the budget entails.

As a candidate, Donald Trump vowed to dismantle the EPA in “almost any form.” And the budget the White House unveiled Tuesday cuts EPA funding by a third. But what’s less known are recent moves that would give the industry more of a voice when it comes to reshaping its approach to scientific recommendations. Science correspondent Miles O’Brien joins Jeffrey Brown to discuss the changes.

Swedish teen activist Greta Thunberg arrives for a march in Stockholm as a global day of student protests that aims to spark world leaders into action on climate change is underway.

Director Davis Guggenheim eloquently weaves the science of global warming with Al Gore’s personal history and lifelong commitment to reversing the effects of global climate change in the most talked-about documentary at Sundance. An audience and critical favorite, An Inconvenient Truth makes the compelling case that global warming is real, man-made, and its effects will be cataclysmic if we don’t act now. Gore presents a wide array of facts and information in a thoughtful and compelling way: often humorous, frequently emotional, always fascinating. In the end, An Inconvenient Truth accomplishes what all great films should: it leaves the viewer shaken, involved and inspired.

16-year-old Swedish native Greta Thunberg was nominated by lawmakers in nearby Norway. Voting starts annually every October by the Norwegian Nobel Committee. Thunberg has recently delivered many fiery speeches to world leaders over inaction on climate change.

The Swedish Schoolgirl That Took Davos To Task On Climate Change

Greta and the Snowman: From Greta Thunberg to the man who’s measured the weather every day for nearly half a century, it is private citizens leading the charge on climate change prevention. This report profiles these two extraordinary characters. Subscribe to Journeyman here: http://www.youtube.com/subscription_c… “I have been protesting outside the Swedish parliament every Friday to pressure the government to comply with the Paris agreement.” Sixteen year old Greta Thunberg has drawn international attention to her fight against climate change. Since she was 11, Greta battled with depression at what she saw as global inaction on climate change. “I was diagnosed with Aspergers, OCD and selective mutism”, she explains. She has now reached her 21st strike from school and inspired children all over the world to follow her. “She’s back in normal school; it’s like her special needs are gone!”, her father says happily. Meanwhile, 68-year-old Billy Barr, who lives in an isolated house at 2,900m altitude in the Rockies, has been measuring snowfall every day for 46 years. “I started writing down the daily weather, and that’s all it was, it was entertaining. But after five years I went back to my notebooks, and compared that winter to all the other winters, and I kept doing that year after year.” In 1990 a biologist learned of Billy’s data, and it is now crucial to scientists’ understanding of the rate at which climate change is occurring. “He’s someone that can convey how the world’s changing…he brings a story that people can connect to personally.”

Greta Thunberg to EU’s Juncker: “We started to clean up your mess, stop sweeping mess under carpet”

16 years old climate activist Greta Thunberg has given a rousing speech at an EU event in Brussels. The teenager opened a European Commission event in front of President Jean-Claude Juncker where she told politicians to stop ‘sweeping their mess under the carpet for our generation to clean up’. Greta, from Sweden, defended the hundreds of thousands of children who took part in global school strikes saying: ‘If you say we are wasting valuable lesson time, let me remind you, our political leaders have wasted decades through denial and inaction and since our time is running out we have started to take action.’ Today, Greta Thunberg is joining Belgian students who are skipping classes for the seventh Thursday in a row to march through Brussels to draw more attention to fighting climate change. The 16-year-old Thunberg said youngsters are being forced to skip school and protest because adults are not addressing climate issues quickly enough. She told the European Economic and Social Committee plenary session that “we are school striking because we have done our homework” on the dangers facing the Earth. Thunberg has become her generation’s voice on climate change after inspiring students around the world to go on strike to express their anger and angst over global warming.