The Fight for Hampshire College: How One School’s Financial Calamity Exposes a Crisis in High er Ed

The Madhouse Effect: How Climate Change Denial Is Threatening Our Planet, Destroying Our Politics, and Driving Us Crazy: Michael Mann, Tom Toles

The award-winning climate scientist Michael E. Mann and the Pulitzer Prize–winning political cartoonist Tom Toles have been on the front lines of the fight against climate denialism for most of their careers. They have witnessed the manipulation of the media by business and political interests and the unconscionable play to partisanship on issues that affect the well-being of billions. The lessons they have learned have been invaluable, inspiring this brilliant, colorful escape hatch from the madhouse of the climate wars.

The Madhouse Effect portrays the intellectual pretzels into which denialists must twist logic to explain away the clear evidence that human activity has changed Earth’s climate. Toles’s cartoons collapse counter-scientific strategies into their biased components, helping readers see how to best strike at these fallacies. Mann’s expert skills at science communication aim to restore sanity to a debate that continues to rage against widely acknowledged scientific consensus. The synergy of these two climate science crusaders enlivens the gloom and doom of so many climate-themed books―and may even convert die-hard doubters to the side of sound science. 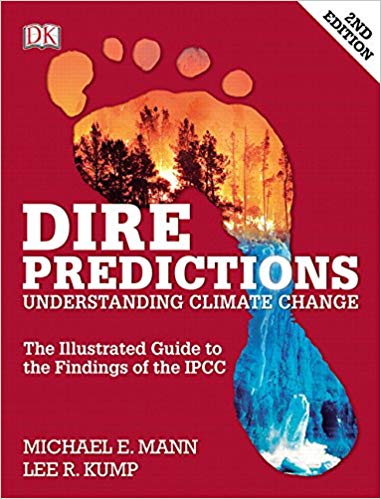 For any science or social science course in need of a basic understanding of IPCC reports.

Periodic reports from the Intergovernmental Panel on Climate Change (IPCC) evaluate the risk of climate change brought on by humans. But the sheer volume of scientific data remains inscrutable to the general public, particularly to those who may still question the validity of climate change. In just over 200 pages, this practical text presents and expands upon the essential findings in a visually stunning and undeniably powerful way to the lay reader. Scientific findings that provide validity to the implications of climate change are presented in clear-cut graphic elements, striking images, and understandable analogies.

The Second Edition covers the latest climate change data and scientific consensus from the Fifth Assessment Report and integrates links to media and active learning to capture learning opportunities for students. The text is also available in various eText formats, including an upgrade option from Mastering Geography.

Dr. Michael E. Mann is Distinguished Professor of Atmospheric Science at Penn State University, with joint appointments in the Department of Geosciences and the Earth and Environmental Systems Institute (EESI). He is also director of the Penn State Earth System Science Center (ESSC).

Dr. Mann was a Lead Author on the Observed Climate Variability and Change chapter of the Intergovernmental Panel on Climate Change (IPCC) Third Scientific Assessment Report in 2001 and was organizing committee chair for the National Academy of Sciences Frontiers of Science in 2003. He has received a number of honors and awards including NOAA’s outstanding publication award in 2002 and selection by Scientific American as one of the fifty leading visionaries in science and technology in 2002. He contributed, with other IPCC authors, to the award of the 2007 Nobel Peace Prize. He was awarded the Hans Oeschger Medal of the European Geosciences Union in 2012 and was awarded the National Conservation Achievement Award for science by the National Wildlife Federation in 2013. He made Bloomberg News’ list of fifty most influential people in 2013. In 2014, he was named Highly Cited Researcher by the Institute for Scientific Information (ISI) and received the Friend of the Planet Award from the National Center for Science Education. He received the Stephen H. Schneider Award for Outstanding Climate Science Communication from Climate One in 2017, the Award for Public Engagement with Science from the American Association for the Advancement of Science in 2018 and the Climate Communication Prize from the American Geophysical Union in 2018. In 2019 he received the Tyler Prize for Environmental Achievement. He is a Fellow of the American Geophysical Union, the American Meteorological Society, the Geological Society of America, the American Association for the Advancement of Science, and the Committee for Skeptical Inquiry. He is also a co-founder of the award-winning science website RealClimate.org.

Dr. Mann is author of more than 200 peer-reviewed and edited publications, numerous op-eds and commentaries, and four books including Dire Predictions: Understanding Climate Change, The Hockey Stick and the Climate Wars: Dispatches from the Front Lines, The Madhouse Effect: How Climate Change Denial is Threatening our Planet, Destroying Our Politics, and Driving Us Crazy and The Tantrum that Saved the World.

This will change how you shop forever. Visit www.bpa-free.me to learn more and take action! In this 3-minute comedic video, a woman shopping in a grocery store becomes increasingly concerned about Bisphenol-A exposure as her surroundings start interacting with her.