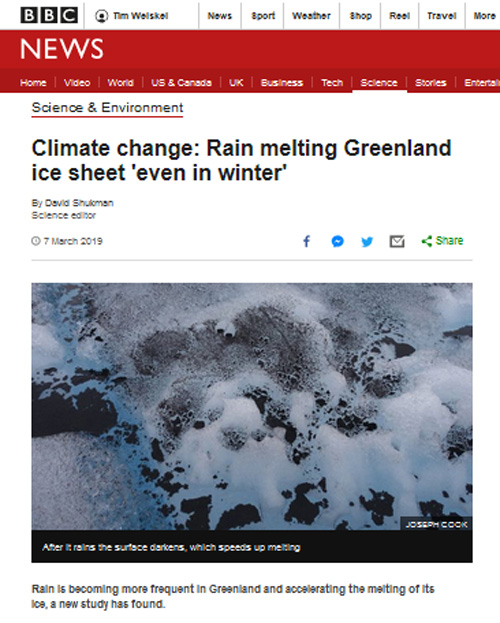 Rain is becoming more frequent in Greenland and accelerating the melting of its ice, a new study has found.

The massive Greenland ice-sheet is being watched closely because it holds a huge store of frozen water.

And if all of that ice melted, the sea level would rise by seven metres, threatening coastal population centres around the world.

Precipitation usually falls as snow in winter – rather than as rain – which can balance out any melting of the ice in the summer.

What did the scientists find?

The scientists studied satellite pictures of the ice-sheet which reveal the areas where melting is taking place.

And they combined those images with data gathered from 20 automated weather stations that recorded when rainfall occurred.

The findings, published in the journal The Cryosphere, show that while there were about two spells of winter rain every year in the early phase of the study period, that had risen to 12 spells by 2012.

On more than 300 occasions between 1979-2012, the analysis found that rainfall events were triggering a melting of the ice.