Fragile Legacies showcases the fascinating photographs of Chief Solomon Osagie Alonge (1911-1994), Nigeria’s premier twentieth-century photographer and the first official photographer to the Royal Court of the Kingdom of Benin. Alonge’s historic photographs document the rituals, pageantry, and regalia of the Benin Court for over a half-century, and provide rare insight into the history of Nigeria from an insider’s perspective. With important contributions by leading Nigerian writers, this volume examines the transformations of colonialism in Africa, and more specifically Nigeria, within the context of global capitalism in the early to mid-twentieth century.

J. A. Green (1873–1905) was one of the most prolific and accomplished indigenous photographers to be active in West Africa. This beautiful book celebrates Green’s photographs and opens a new chapter in the early photographic history of Africa. Soon after photography reached the west coast of Africa in the 1840s, the technology and the resultant images were disseminated widely, appealing to African elites, European residents, and travelers to the region. Responding to the need for more photographs, expatriate and indigenous photographers began working along the coasts, particularly in major harbor towns. Green, whose identity remained hidden behind his English surname, maintained a photography business in Bonny along the Niger Delta. His work covered a wide range of themes including portraiture, scenes of daily and ritual life, commerce, and building. Martha G. Anderson, Lisa Aronson, and the contributors have uncovered 350 of Green’s images in archives, publications, and even albums that celebrated colonial achievements. This landmark book unifies these dispersed images and presents a history of the photographer and the area in which he worked.

Postcards from Africa: Photographers of the Colonial Era: Christraud Geary

The complex history of imaging Africa, as seen in its postcard industry

During the global postcard craze that peaked around 1900 and continued for several decades thereafter, photographers in Africa grasped the opportunity to serve a lucrative market for images of the continent, both locally and worldwide. Their picture postcards now contribute to understanding political and cultural changes in Africa at the time, as the rise of the new medium coincided with the expansion and consolidation of colonial rule. They also provide a way to reconstruct the life and work of the photographers of European, African and other backgrounds who created these images―which often survive only in postcard form―and in some cases published them as well.

The cards were produced for residents and travelers in Africa, as well as for buyers and collectors who had never set foot on the continent. Their depictions of colonial administrations and the exploitation of resources and peoples, as well as images inscribing tribal identities and racial classifications, often reflect the colonizers’ worldview. Yet it is also possible to recover the authorship of some of the African women and men who participated in these photographic encounters. For instance, some cards show that members of Africa’s elites recognized the power of photographic images to enhance their standing and present their own narratives.

Postcards from Africa reproduces a generous selection of these complex cards―the majority drawn from the extensive Leonard A. Lauder Postcard Archive at the Museum of Fine Arts, Boston―accompanied by a leading scholar’s exploration of the complicated stories they tell. 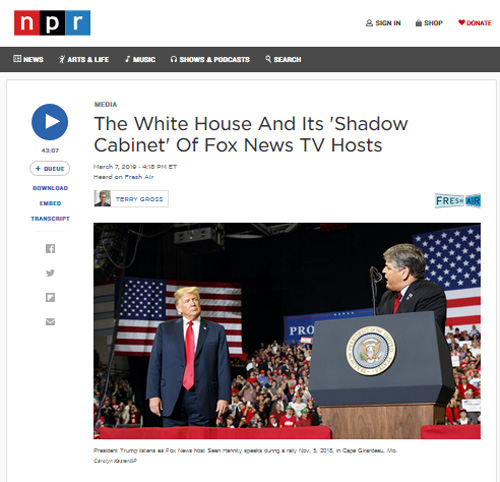 He wasn’t the first — or only — Fox News personality to align with the president. In November, Fox News host Sean Hannity, who reportedly speaks to Trump “almost daily,” faced criticism after joining Trump onstage during a rally. And New Yorker journalist Jane Mayer reports that 21st Century Fox Chairman Rupert Murdoch speaks to Trump on a weekly basis and that Fox Business Network anchor Lou Dobbs has been “patched into” Oval Office meetings.

“In past White Houses there have been favored members of the press, but nothing where someone is so close in that they are coordinating on a daily basis with the president,” Mayer tells Fresh Air.

Mayer’s latest New Yorker article, “The Making of the Fox News White House,” describes the ways in which the network has bolstered the president — and vice versa. One of the stories she uncovered involves Trump’s attempt to get the Justice Department to stop AT&T from acquiring Fox News rival CNN’s parent, Time Warner.

When a world expert on the ocean/ice cap interface heads for the North Pole, his devotion to the scientific method uncovers unexpected global-scale processes at work that may have a profound impact on future generations. Miles McPhee. He grew up on a fruit orchard in Naches. The following is a list of some of his accomplishments to date: B.S. with distinction, Civil Engineering, Stanford University, 1968: Ph.D., Geophysics, subspecialty geophysical fluid dynamics, 1974: Researcher at the Polar Science Center, Applied Physics Laboratory, Univ. of Washington 1974-78: Geophysicist, US Army Cold Regions Laboratory, Hanover NH, 1978-1981: Occupied the Arctic Chair at the Naval Postgraduate School, Monterey, CA 1982-83: Formed independent McPhee Research Company in 1984 that has continued to the present: Lead and participated in two dozen scientific projects in both the Arctic and Antarctic: Authored or coauthored 60 refereed scientific articles, including chapters in 5 books, and two encyclopedia entries: Authored a monograph entitled Air-Ice-Ocean Interaction, published by Springer, 2008: Served a term on the Polar Research Board of the National Academy of Sciences. Miles will be speaking about his journey This talk was given at a TEDx event using the TED conference format but independently organized by a local community.

After months of mounting criticism about Facebook’s lack of privacy protections, CEO Mark Zuckerberg announced Wednesday that he will be shifting the social media giant from focusing on publicly sharing information to private communication. Zuckerberg said that he would do this in part by integrating Instagram, WhatsApp and Messenger—which are all platforms that he controls—and by allowing communication to be deleted instead of remaining on the internet permanently.

Lawmakers have introduced legislation to restore Obama-era net neutrality rules that were gutted by the Trump administration. The changes, approved in 2017 in a 3-2 vote by Republican commissioners on the FCC, paved the way for internet service providers to throttle internet traffic speeds according to how much customers pay—or based on the websites they wish to favor. The Save the Internet Act, introduced by congressional Democrats Wednesday, would bar telecom companies from blocking, throttling or otherwise interfering with internet access. This is New York Democratic Congressmember Yvette Clarke.

Rep. Yvette Clarke: “The Republican FCC has dismantled net neutrality, saddling consumers with higher costs and less choice, throttling competition and punishing entrepreneurs, small businesses, communities of color and other Americans who are vulnerable and disenfranchised. This is the 21st century issue of equity.”

Texas officials and the Environmental Protection Agency barred NASA scientists from studying the release of toxic chemicals in and around Houston in the wake of Hurricane Harvey in 2017. That’s according to the Los Angeles Times, which reports NASA scientists were stunned after they were barred from flying a jet over Houston equipped with sophisticated air samplers that would have helped to identify areas where toxic releases posed a threat to human health. Hurricane Harvey inundated the Texas coast with record rainfall, dropping more than 60 inches of rain over the course of a few days. The area is home to thousands of oil refineries and petrochemical plants, as well as over a dozen Superfund sites.

A new report finds the investigative arm of the Immigration and Customs Enforcement agency—ICE—maintained a secret list of New York City activist groups that protested Trump administration policies. A four-page document obtained by The Nation magazine titled “Anti-Trump Protest Spreadsheet” shows Homeland Security Investigations kept tabs on a series of protests held in New York over a 17-day period last summer targeting white supremacy, deportations and the National Rifle Association. None of the demonstrations appear to be linked to HSI’s mandate to investigate “cross-border criminal activity.” One of the protests surveilled by HSI was a rally organized by Congressmember Adriano Espaillat responding to a neo-Nazi group’s display of a racist banner. He told The Nation, “I would like to find out why our event was on that list, and whether it was surveilled or infiltrated, and why the racist, anti-Semitic group was not on the list.”

Mar 07, 2019
Meanwhile, in San Diego, California, newly revealed documents show the U.S. government created a secret database of activists and journalists who were documenting the Trump administration’s efforts to thwart a caravan of migrants hoping to win asylum in the U.S. last year at the San Ysidro port of entry between Tijuana and San Diego. An investigation from San Diego’s NBC 7 revealed the list was shared among Homeland Security Investigations, ICE, Customs and Border Protection and the FBI. It included the names of 10 journalists—seven of whom were U.S. citizens—along with nearly four dozen others listed as “organizers” or “instigators.” Some of the journalists and at least one immigration lawyer had alerts placed on their passports that prevented them from entering Mexico. Others on the list reported they were stopped by Mexican police or were subjected to lengthy interviews and searches when re-entering the U.S.

An artificial intelligence battle is coming between the U.S. and China

A future built on artificial intelligence is already here. It’s in the way Netflix chooses the next show for you to binge, how your Gmail account suggests simple email replies, in the technology that protects your credit card purchases. And if we continue to let AI develop the way we do now, says futurist Amy Webb, we’re probably not going to like where it takes us.

She says the future of AI is increasingly divided between the work done by six American companies — Google, IBM, Amazon, Facebook, Microsoft and Apple — and three Chinese ones — Baidu, Tencent and Alibaba. But neither country has a technology policy that “puts humans at the center and puts the future of humanity at the forefront.” What could happen to us all in the very near future is the subject of her latest book, “The Big Nine: How the Tech Titans and Their Thinking Machines Could Warp Humanity.”