James Island and Related Sites present a testimony to the main periods and facets of the encounter between Africa and Europe along the River Gambia, a continuum stretching from pre-colonial and pre-slavery times to independence. The site is particularly significant for its relation to the beginning of the slave trade and its abolition. It also documents early access to the interior of Africa. Source: UNESCO TV / © NHK Nippon Hoso Kyokai URL: http://whc.unesco.org/en/list/761/

The Roots Excursion to Kunta Kinteh’s village “Juffureh” and to James Island in The Gambia. April 2016

Gambia’s race to save its ‘Roots’ on Kunta Kinteh island

As the rebel slave who defied his captors, Kunta Kinte, immortalised in print and on screen in “Roots”, put The Gambia on the map for historical tourism. But the island where he and other west Africans faced the horrors of being chained, branded and separated before leaving their homeland forever, is under threat from sea erosion and neglect.

The final prison cell of Kunte Kimteh before being taken to the americas as a man who was enslaved. 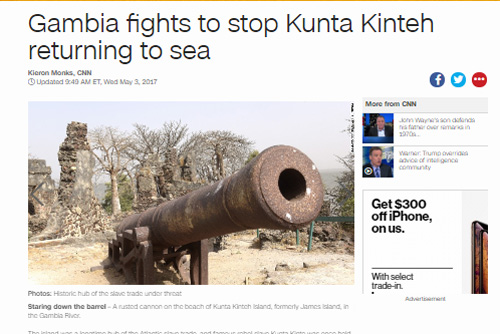 This speck of land at the mouth of the Gambia river was once a major waypoint of the transatlantic slave trade. African abductees were brutally imprisoned on the island, ahead of being forcibly transported to the US.

“It was the departure point for hundreds of thousands of blacks captured in the Gambia River area from 1588 to 1807,” says historian Hassoum Ceesay, curator of the Gambia National Museum.

The victims included famous rebel Kunta Kinte, who lost a foot resisting the slavers. His story inspired Alex Haley’s 1976 novel “Roots” and the hit TV series of the same name. His legacy has been kept alive in popular culture by artists such as Kendrick Lamar.

Growing public awareness of Kinte’s story and the horrors of slavery has made the island an attraction for tourists and historians.
In 2003, James Island was certified a UNESCO World Heritage Site as a “unique memorial to the Atlantic Slave Trade.” In 2011, James was renamed Kunta Kinteh Island in commemoration of its most famous son.

In addition to being a physical studio space in the Hutchins Center, equipped with hardware and software for multimedia production, HDS is also a community and network of like-minded scholars, invested in collaborative work and experimental narrative forms.

The Power of Advertising

A vodcast by Lienke Productions

This documentary series was written, produced and directed by the late Danny Schecter [ Daniel Isaac “Danny” Schechter (June 27, 1942 – March 19, 2015)], who earned a highly respected reputation as “the News Dissector” because of his penetrating analysis of all aspects of the news media.