It started as a climate crisis, driven by fossil fuels. Now it’s becoming perhaps the greatest human health crisis yet. The good news? Around the world, people, businesses, and communities are taking action and helping create a healthier future for us all. For example, the Mexico City is one of the largest cities in the Western Hemisphere and there the leaders are thinking big and have gone to work in search of solutions.

This Is What a Nuclear War Would Actually Look Like (HBO)

As Secretary of Defense under President Clinton, Bill Perry has spent most of his life watching the world prepare for nuclear war. And given the current political climate, he thinks the world isn’t nearly as scared as it should be.

Since the dawn of the nuclear age in the 1940s, most of the worlds nuclear capability was split between the U.S. and Russia. The umbrella of American protection meant that its allies didn’t have to develop nukes of their own.

But that appears to be changing.

President Donald Trump has been less hawkish about standing up to Russia. Now, European Union is reportedly considering a nuclear deterrent of its own. During the first week of March — after reports came out that as he left office, President Barack Obama warned Trump that North Korea would be “the most urgent” problem — North Korea fired four missiles that landed just 200 miles from Japan.

All of this has experts, including Perry, worried about an era of renewed nuclear threat from jittery states and rogue actors. Perry often talks about his nightmare scenario: a small amount of enriched uranium falling into the hands of a terrorist group.

“I think of all of the nuclear catastrophes that could happen, this is the most probable,” the 89-year-old said. “I think, I would say, there’s probably an even chance, this would happen sometime in the next 10 years.”

https://democracynow.org – President Trump met with Colombian President Iván Duque at the White House Wednesday to discuss ongoing efforts to topple the Venezuelan government, the same day that U.S. special envoy to Venezuela Elliott Abrams faced questioning from Congress about his role in atrocities carried out in Latin America in the 1980s. This includes defending Guatemalan dictator General Efraín Ríos Montt’s campaign of mass murder and torture of indigenous people. We speak with Roberto Lovato, independent journalist working out of the San Francisco Writers’ Grotto, about the violent history of Elliott Abrams and the U.S.-backed opposition in Venezuela.

https://democracynow.org – Democratic Congressmember Ilhan Omar of Minnesota is facing criticism today after commenting on a tweet by Glenn Greenwald. On Sunday, Greenwald tweeted, ”GOP Leader Kevin McCarthy threatens punishment for @IlhanMN and @RashidaTlaib over their criticisms of Israel. It’s stunning how much time US political leaders spend defending a foreign nation even if it means attacking free speech rights of Americans.” Rep. Omar retweeted his post and added the line: “It’s all about the Benjamins baby.” She later named AIPAC as the organization paying American politicians to be pro-Israel. 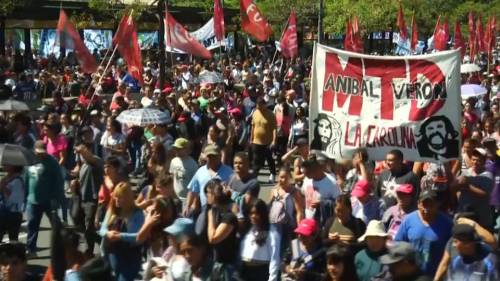 In Argentina, tens of thousands marched through the capital Buenos Aires Wednesday, blocking roads to protest high unemployment and austerity measures imposed by President Mauricio Macri, including cuts to public utility subsidies. The austerity measures have led to higher water and electricity bills. They come as Argentina submitted to a plan by the International Monetary Fund to end much of its fiscal deficit by the end of the year. This is Argentine labor leader Hugo Godoy.

Hugo Godoy: “Our people do not want this agreement with the International Monetary Fund, which we want to repeal. We have bills and proposals for government policies that include the needs of the Argentine people.” 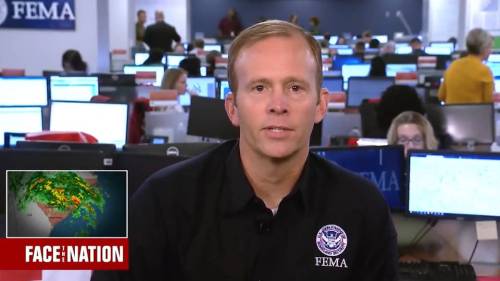 The head of the Federal Emergency Management Agency, Brock Long, said Wednesday he is resigning his post after less than two years on the job. Long’s resignation came after a government auditor found he improperly used government vehicles to travel to and from his home in North Carolina. As FEMA administrator, Brock Long oversaw the Trump administration’s widely criticized response to devastating wildfires in California and other western states, as well as a series of major hurricanes in 2017—Harvey, Irma and Maria. Last year, a George Washington University study commissioned by Puerto Rico’s governor found over 3,000 people died as a direct result of Hurricane Maria. After Donald Trump disputed the findings, Brock Long defended the president.

Brock Long: “These studies are all over the place. The Harvard study was done differently, studies a different period of time, versus the George Washington study. There’s a big discrepancy, whether it’s direct deaths or indirect deaths.”

In response to Brock Long’s resignation Wednesday, San Juan Mayor Carmen Yulín Cruz tweeted, “Brock Long was Trump’s hatchet man in the botched Puerto Rican relief effort after hurricanes Irma and María. He should have been fired and held accountable for the loss of lives.” Deputy FEMA chief Peter Gaynor will serve as acting administrator until the Senate confirms a replacement.

Administrator Jim Bridenstine kicked off an industry forum with remarks, followed by William Gerstenmaier, associate administrator for the Human Exploration and Operations Mission Directorate, who provided an overview of the agency’s lunar human architecture solicitation requests. This video is available for download from NASA’s Image and Video Library: https://images.nasa.gov/details-NHQ_2…

The Story Of The Tuskegee Airmen Documentary – Military Channel(New)

The Story Of The Tuskegee Airmen Documentary – Military Channel

The Tuskegee Airmen is the prominent name of a team of African-American military aviators (competitor as well as bombing plane) who dealt with in The second world war. Officially, they developed the 332nd Boxer Group as well as the 477th Bombardment Group of the Usa Army Air Forces. The name also puts on the navigators, bombardiers, mechanics, teachers, team chiefs, registered nurses, cooks as well as other assistance employees for the aviators.

The Tuskegee Airmen were the first African-American army aviators in the Usa Armed Forces. Throughout The second world war, black Americans in lots of UNITED STATE states were still based on the Jim Crow legislations [N 1] and also the American armed force was racially set apart, as was much of the federal government.

The Tuskegee Airmen were subjected to racial discrimination, both within and outside the military. All black military pilots that trained in the Usa trained at Moton Field, the Tuskegee Military Air Field, and also were enlightened at Tuskegee College, situated near Tuskegee, Alabama; the group included five Haitians from the Haitian Flying force (Alix Pasquet, Raymond Cassagnol, Pelissier Nicolas, Ludovic Audant, and also Eberle Guilbaud).

There was additionally one aviator from Port of Spain, Trinidad, Eugene Theodore. [3] [4] Although the 477th Barrage Team trained with North American B-25 Mitchell bombers, they never ever served in combat. The 99th Quest Squadron (later, 99th Fighter Squadron) was the very first black flying squadron, and the very first to release overseas (to North Africa in April 1943, and later on to Sicily and also Italy). The 332nd Boxer Group, which initially consisted of the 100th, 301st, and 302nd Fighter Squadrons, was the first black flying group. The team set up to Italy in early 1944. In June 1944, the 332nd Competitor Group started flying hefty bombing plane escort goals, and also in July 1944, the 99th Competitor Squadron was appointed to the 332nd Boxer Team, which then had 4 competitor squadrons.

The 99th Boxer Squadron was at first furnished with Curtiss P-40 Warhawk fighter-bomber airplane. The 332nd Fighter Team and also its 100th, 301st and also 302nd Fighter Squadrons were outfitted for first combat missions with Bell P-39 Airacobras (March 1944), later with Republic P-47 Thunderbolts (June– July 1944), and also finally with the plane with which they became most commonly linked, the North American P-51 Horse (July 1944). When the pilots of the 332nd Competitor Group repainted the tails of their P-47s and later, P-51s, red, the label “Red Tails” was coined. The red markings that distinguished the Tuskegee Airmen included red bands on the noses of P-51s as well as a red tail, the P-51B as well as D Mustangs flew with comparable color pattern, with red propeller spinners, yellow wing bands and also all-red tail surface areas. 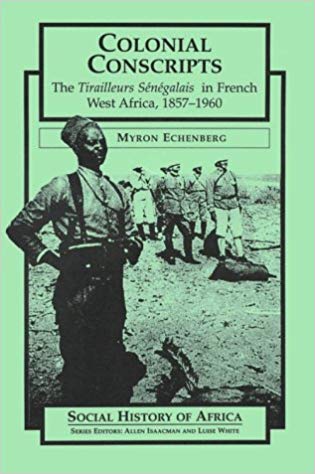 In Colonial Conscripts, Myron Echenberg traces the social history of a large and diverse group of West Africans who served in Senegalese regiments of the French colonial army. Examining both how the soldiers and veterans lived out their lives in service and how the military institution functioned, Dr Echenberg also reviews the African military within a framework bounded by such issues as labor, migration, and demography. The main focus is on how rank-and-file African soldiers, officers, and veterans responded to their ambiguous and often contradictory position within the colonial social formation.

About the Author
Myron Echenberg is an associate professor at McGill University, where he teaches African history. He was for several years the co-editor of the Canadian Journal of African Studies and has published numerous articles dealing with French-speaking West Africa. His Colonial Conscripts: the Tirailleurs Senegalais in French West Africa, 1857-1960 won the Herskovits Award of the African Studies Association for the outstanding original scholarly work published during 1991.