What the New Farm Bill Means and Why it Matters, Nina Ichikawa, Shanti Prasad, Christina Badaracco

Climate scientists reveal their fears for the future

https://democracynow.org – As teacher strikes in Denver and Los Angeles join a wave of recent labor actions bringing attention to the plight of the American public school system, we take a fresh look at one of the largest public school scandals in U.S. history. Public schools in Atlanta, Georgia, were thrown into chaos in 2015 when 11 former educators were convicted in 2015 of racketeering and other charges for allegedly facilitating a massive cheating operation on standardized tests. Prosecutors said the teachers were forced to modify incorrect answers and students were even allowed to fix their responses during exams. The case has fueled criticism of the education system’s reliance on standardized testing, and elicited calls of racism. Thirty-four of the 35 educators indicted in the scandal were African-American. We speak with Shani Robinson, one of the 11 convicted teachers, who has written a new book on the cheating scandal with journalist Anna Simonton. It’s titled “None of the Above: The Untold Story of the Atlanta Public Schools Cheating Scandal, Corporate Greed, and the Criminalization of Educators.”

“Eating Tomorrow” NY Book Launch (0:32): Tim Wise on the title of the book

Clip from Timothy A. Wise’s book talk Feb. 6, 2019, in NY, on the rationale behind the book’s title. Full event video available at: https://www.youtube.com/watch?v=12Znx… More info: https://www.smallplanet.org/eating-to… 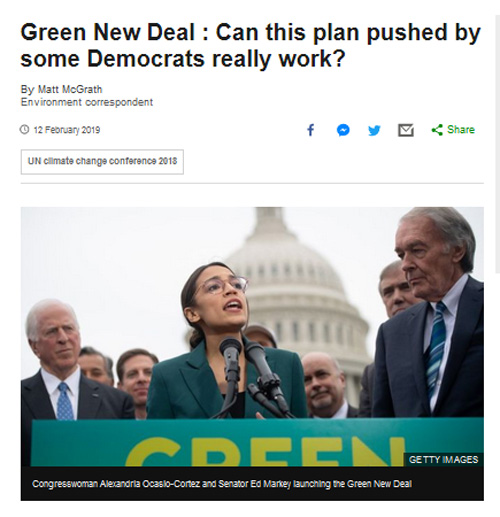 Despite being labelled as a “socialist manifesto”, the Green New Deal (GND) on climate change and jobs has sparked a lively debate in US politics. So what’s in the deal and what will be its likely impact?

However in its current form, the GND is more a political statement than a set of proposals aimed at penalising US citizens.

Introduced by Congresswoman Alexandria Ocasio-Cortez and Senator Ed Markey, the GND is a large scale re-imagining of how economies should work to deal with the root causes of climate change.

It firmly and deliberately sets out to echo the past glories of FDR and the economic New Deal of the 1930s.

Republican leader in the US Senate, Mitch McConnell, said on Tuesday he will bring it to the Senate floor for a vote, so Democrats will have to back it or distance themselves from it.

On February 6, 2019 some 200 students, faculty, activists, and community members crowded into Tishman Auditorium at The New School in New York City to hear Vandana Shiva, Mark Bittman, and author Timothy A. Wise discuss the battle for the future of food. Wise, director of the Land and Food Rights Program at Small Planet Institute, was in New York for the release of his new book, Eating Tomorrow: Agribusiness, Family Farmers, and the Battle for the Future of Food.

Students Love Green New Deal… Until Hearing What’s In It

A Story of the Future of Earth | David Wallace-Wells

We think we know what’s at stake when it comes to climate change, and we often treat it as if it’s tomorrow’s problem. The real story is much, much more urgent. We have released more carbon into the atmosphere over the last thirty years than in the rest of human history, bringing the planet to the brink of climate catastrophe in less than a generation. And yet we still think of climate action as a peripheral concern; a ‘nice to have’ once our more pressing priorities are taken care of.

New York magazine deputy editor and viral sensation David Wallace-Wells paints a disturbing picture of what we’re up against, warning of the real human costs and irrevocable planetary damage that climate change will bring – and sooner than we think. No longer can we live in ignorance or denial. He issues an urgent call to arms, imploring us to change the way we think and talk about our planet’s future.