Before All the World the Youth Challenge the Fatal Myopia, Greed & Childishness of the Trump Generation | EV & N 296 | CCTV 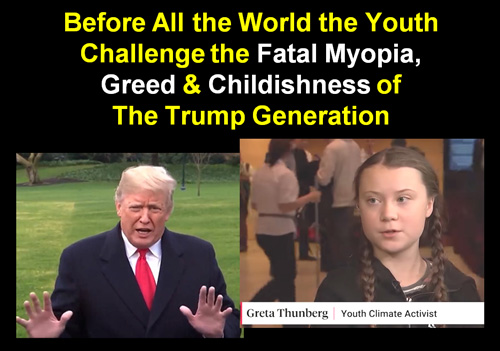 In December 2018 at the Conference of Parties (COP24) in Katowice, Poland a 15-year-old school girl from Sweden, Greta Thunberg, exposed the myopia, greed and childishness of world leaders, highlighting their inability and unwillingness to adopt effective measures to avert the imminent climate catastrophe that scientists have warned the global community about for the past thirty years.

It is important to understand the historical background leading up to Greta Thunberg’s dramatic declaration and the global tragedy it reflects.  During the life-time of adults in their seventies today, the world’s population has tripled.  This has only been possible because of the unprecedented release of energy from the combustion of fossilized carbon in the earth system — coal, petroleum and natural gas.  The result of burning these resources and releasing this massive amount of energy has seen the amassing of moneyed-wealth on an unprecedented scale in human history.  Recently, just one fossil fuel company — Exxon Mobile — made more “money” in one fiscal year than any other company in the history of money.

Moreover, as a consequence of decades of growth of this moneyed “wealth” the world is now experiencing the largest inter-generational transfer of instruments of “wealth” in human history.  “Baby-boomers” from the immediate post-World War II era are working feverishly to pass on their “assets” to designated heirs.

But here’s the rub.  The heirs will not be able to enjoy their inherited “wealth” because — as we now realize — that “wealth” has been bought at the price of the civilizational collapse that is now imminent because of the ecological devastation and global climate disruption caused — in the final analysis — by fossil fuel combustion itself.

Moneyed classes across the world have seen to it that the political systems work to protect and promote their interests.  But the iron-clad alliance between moneyed-wealth and political power has now been exposed for its moral bankruptcy.  The virtual total capture of nation-state leadership by the fossil fuel interests that profit from the extraction and continued consumption of coal, petroleum and natural gas has meant that the world’s children are now witnessing the greatest inter-generational moral betrayal in human history.

The children themselves know this, and they are now denouncing this moral bankruptcy on the global stage.  As Greta Thunberg put it starkly and directly in her speech to world leaders:

“You say you love your children above all else, and yet you are stealing their future in front of their very eyes.”

You Are Stealing Our Future: Greta Thunberg, 15, Condemns the World’s
Inaction on Climate Change

In January 2019, Greta Thunberg issued a challenge to all the business and governmental delegates attending the World Economic Forum (WEF) in Davos, Switzerland.