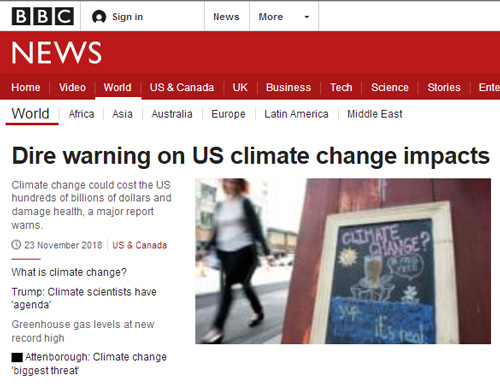 Unchecked climate change will cost the US hundreds of billions of dollars and damage human health and quality of life, a US government report warns.

“Future risks from climate change depend… on decisions made today,” the 4th National Climate Assessment says.

The report says climate change is “presenting growing challenges to human health and safety, quality of life, and the rate of economic growth”.

The warning is at odds with the Trump administration’s fossil fuels agenda.

During a blast of icy weather in Washington this week, Donald Trump tweeted, “whatever happened to global warming?”

Now, without mentioning the president, his own scientists have answered their boss’s question in comprehensive detail.

Global warming is here in the United States, they say – now. It is already deadly serious and without urgent, dramatic change, it will be catastrophic.

This report is striking for two reasons. First, it is not abstract. It gives many specific examples – overwhelmed dams in South Carolina; failing crops in the parched Great Plains; a rise in insect-borne disease in Florida.

For the assessment of the physical science component see

No copyright infringement intended, clips are not monetized. Who Is America is owned by Showtime.

The Trump administration’s tariffs against China and Mexico have sparked retaliation by both countries on American agriculture. As a result, dairy producers have experienced a painful drop in demand, but many hope a promised $12 billion bailout will improve business in the long run. Lisa Desjardins speaks to Jim Mulhern, head of the National Milk Producers Federation, for his perspective. 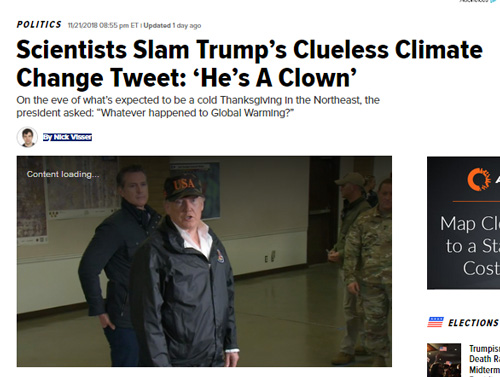 President Donald Trump once again cast doubt on the scientific consensus behind climate change Wednesday night because forecasters said it could be cold in parts of America this week.

“Brutal and Extended Cold Blast could shatter ALL RECORDS,” Trump, who is vacationing in 80-degree weather at his Mar-a-Lago club in Florida for Thanksgiving, tweeted late Monday. “Whatever happened to Global Warming?”

Brutal and Extended Cold Blast could shatter ALL RECORDS – Whatever happened to Global Warming?

The comments appear to reference forecasts that parts of the Northeast could see the coldest late November on record. AccuWeather said the Thanksgiving weekend would be below freezing from New York City up to Maine, and meteorologists said millions of Americans could see the coldest holiday weekend in more than a century.

However, Trump’s suggestion that cold weather means the climate isn’t changing is wrong. NASA notes that weather is a short-term event (raininess, cloudiness, humidity, etc.), while climate is a measurement of weather over time.

“In most places, weather can change from minute-to-minute, hour-to-hour, day-to-day, and season-to-season. Climate, however, is the average of weather over time and space,” the agency says on a government website. “An easy way to remember the difference is that climate is what you expect, like a very hot summer, and weather is what you get, like a hot day with pop-up thunderstorms.”

The world’s scientists overwhelmingly agree that the climate is changing rapidly, and the planet has already warmed dramatically since pre-industrial times due to human activity. A landmark scientific report released by 13 federal agencies last year reached the same conclusion.

Trump, however, has regularly expressed doubt about climate science and has appointed many like-minded officials to senior government positions, including the leaders of the Environmental Protection Agency and the Interior Department.