On Thanksgiving, a look back at colonial capitalism

Concentrations of key gases in the atmosphere that are driving up global temperatures reached a new high in 2017.

In their annual greenhouse gas bulletin, the World Meteorological Organization (WMO) says there is no sign of reversal in this rising trend.

Concentrations differ from emissions in that they represent what remains in the atmosphere after some of the gases are absorbed by the seas, land and trees.

Since 1990 the warming impact of these long lived gases on the climate has increased by 41%.

How does the latest data compare to previous years?

2017 continues the rise in concentrations of CO2 which are now 46% greater than the levels in the atmosphere before the industrial revolution.

The scientists at the WMO believe that the amount of CO2 in the atmosphere right now hasn’t been seen in a long, long time.

This event features three unique voices from several different traditions and life experiences: Mary Ashu, a forest ranger from Cameroon; Prathima Muniyappa, a researcher at the MIT Media Lab exploring the use of space technology to advance issues of social justice; and Stacy Bare, a war veteran, National Geographic Adventurer, and co-founder of the Great Outdoors Lab.
More event info here: https://goo.gl/6Pkk4Z
Learn more about Harvard Divinity School and its mission to illuminate, engage, and serve at http://hds.harvard.edu/.

This event is part of a larger collaboration between the Planetary Health Alliance and the Harvard Divinity School called “The Constellation Project,” led by Dr. Sam Myers and Terry Tempest Williams, which brings together science, faith, arts, and indigenous communities to explore larger questions about our place in the world and imagine a better future.

We see that this is an opportunity to open the dialogue about some of the deeper moral questions about how we connect with the people and places around us and see our role in the world — important considerations for any sort of lasting bottom-up change that addresses our global environmental and health challenges. What is the authority of the awe and reverence we feel in natural settings? How do we support a different narrative about our place in the world that honors an emotional/spiritual relationship to nature and recognizes that, just as nature takes care of us, we also need to take care of nature? 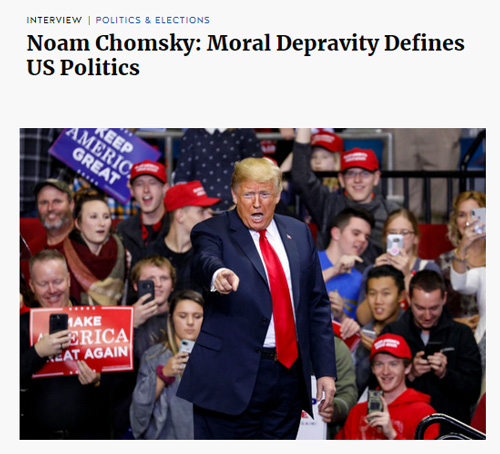 The US midterm elections of November 6, 2018, produced a divided Congress and essentially reaffirmed the existence of two nations in one country. But they also revealed, once again, the deep state of moral and political depravity that prevails in the country’s political culture — at least insofar as political campaigns go. In the exclusive interview below, world-renowned scholar and public intellectual Noam Chomsky discusses how the major issues confronting the United States and the world at large were barely addressed by the majority of candidates of both parties.

C.J. Polychroniou: Noam, with people still arguing about winners and losers from the 2018 midterm elections (and there is clearly a lot to say about what those elections mean), what do you consider to be the most striking features of the latest manifestation of American democracy in action?

Noam Chomsky: The most striking features are brutally clear.

Humanity faces two imminent existential threats: environmental catastrophe and nuclear war. These were virtually ignored in the campaign rhetoric and general coverage. There was plenty of criticism of the Trump administration, but scarcely a word about by far the most ominous positions the administration has taken: increasing the already dire threat of nuclear war, and racing to destroy the physical environment that organized human society needs in order to survive.

These are the most critical and urgent questions that have arisen in all of human history. The fact that they scarcely arose in the campaign is truly stunning — and carries some important, if unpleasant, lessons about our moral and intellectual culture.