Edge of Extinction:Time for a Revolution?

Morons will focus their comments on the shirt. People experiencing denial or anger will focus on distractions. Intelligent viewers will focus on the message. www.guymcpherson.com www.onlyloveremains.org

Edge of Extinction: Will Volcanoes Save Us?

www.guymcpherson.com www.onlyloveremains.org Message from Afrizen: “In my journey through the “DABDA” stages of grieving, regarding my understanding and expectation of what is to come in terms of anthropomorphic climate change, this song expresses my time in the first A – Anger. With time and reflection I’ve made it through to the second A, Acceptance, and my position regarding my lyrics has changed. They made sense when my assumptions were 1. that humanity and nature are separate, 2. that humanity is “committing crimes” against nature, and 3. that humanity will be punished for doing so.

My thinking now is that 1. I don’t see a fundamental distinction between our species and the rest of nature, and 2. humanity is behaving exactly in accordance with its evolved genetic imperatives to survive, thrive and multiply today, regardless of the consequences tomorrow. I think my lyrics’ vitriolic theme and tone are misplaced and I suspect the song’s effect might possibly be to either foster or reinforce anger and bitterness in listeners. These are natural and appropriate emotions when first waking up to the predicament we are in (as I understand it) but, in my personal experience, anger and bitterness are unhelpful and detrimental if not worked through and overcome. The upsides of this new perspective for me are greater compassion and tolerance for my fellows, greater peace of mind and general happiness. I can only wish the same for others who are going through this.”

Michael Cohen: What Trump lashing out at his ex-lawyer reveals – BBC News

Michael Cohen is a liar and a “weak person”, according to the president, who lashed out at his ex-lawyer after he pleaded guilty to lying to Congress. The BBC’s Anthony Zurcher analyses Mr Trump’s response. Video by Cody Godwin.

Farmers Voice Their Plight, If Only Modi Understood

Farmers have been protesting against the pro-corporate policies of Modi government for long. From across the country they assembled in Delhi to be heard. They celebrated, sang and danced together.

This animated thematic map narrates the spatial history of the greatest slave insurrection in the eighteenth century British Empire. To teachers and researchers, the presentation offers a carefully curated archive of key documentary evidence. To all viewers, the map suggests an argument about the strategies of the rebels and the tactics of counterinsurgency, about the importance of the landscape to the course of the uprising, and about the difficulty of representing such events cartographically with available sources. Although this cartographic narration cannot be taken as an exhaustive database—for instance, it does not examine major themes such as belonging and affiliation among the insurgents or the larger imperial context and interconnected Atlantic world— the map offers an illuminating interpretation of the military campaign’s spatial dynamics.

Herskovits at the Heart of Blackness

To watch the entire documentary, to read background information and to order DVDs, visit: http://newsreel.org/video/HERSKOVITS-… A compelling examination of the career of Melville J. Herskovits, the pioneering American anthropologist of African Studies and controversial intellectual who established the first African Studies Center at an American university and authored, “The Myth of the Negro Past.” http://www.newsreel.org/nav/title.asp…

The Reaper’s Garden: Death and Power in the World of Atlantic Slavery: Vincent Brown

What did people make of death in the world of Atlantic slavery? In The Reaper’s Garden, Vincent Brown asks this question about Jamaica, the staggeringly profitable hub of the British Empire in America–and a human catastrophe. Popularly known as the grave of the Europeans, it was just as deadly for Africans and their descendants. Yet among the survivors, the dead remained both a vital presence and a social force.

In this compelling and evocative story of a world in flux, Brown shows that death was as generative as it was destructive. From the eighteenth-century zenith of British colonial slavery to its demise in the 1830s, the Grim Reaper cultivated essential aspects of social life in Jamaica–belonging and status, dreams for the future, and commemorations of the past. Surveying a haunted landscape, Brown unfolds the letters of anxious colonists; listens in on wakes, eulogies, and solemn incantations; peers into crypts and coffins, and finds the very spirit of human struggle in slavery. Masters and enslaved, fortune seekers and spiritual healers, rebels and rulers, all summoned the dead to further their desires and ambitions. In this turbulent transatlantic world, Brown argues, “mortuary politics” played a consequential role in determining the course of history.

Insightful and powerfully affecting, The Reaper’s Garden promises to enrich our understanding of the ways that death shaped political life in the world of Atlantic slavery and beyond. 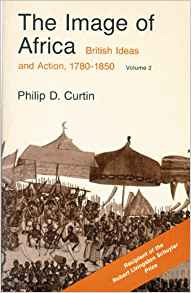 In this encyclopedic work of intellectual history, Philip D. Curtain sought to discover the British image of Africa for the years 1780–1850.

“For the light it sheds on the problems of the new Africa as well as the old, it should be read by everyone concerned with the continent’s affairs”—Africa Report

“Efforts to explain the nature of Africans and their culture led eventually to discussion of race, of origins, of languages, of climate, of Islam, and of biblical interpretations of man’s creation. . . . Scholars will find this monumental study most useful not only for assumptions about Africans and their history, but also for the light cast on such social sciences as anthropology and ethnology, for theories of tropical medicine, and also for its vast bibliographical information.”—Journal of the History of Medicine and Allied Sciences