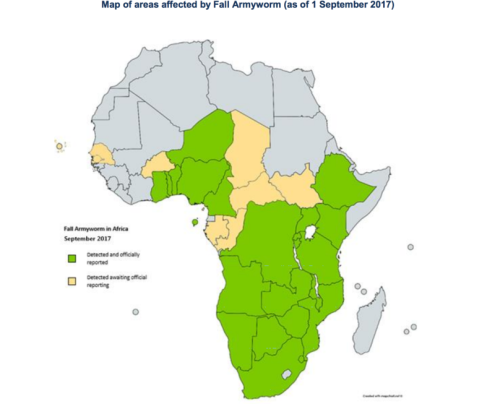 FAO: Food and Agriculture Organization of the United Nations.
https://tinyurl.com/y9dkssdc

22:12
The fall armyworm spread to more than half the continent of Africa in a matter of months. It’s the kind of threat that the Insect Allies program is meant to combat.
An international group of scientists and legal scholars are warning that a federal research program called Insect Allies could unintentionally lead to biological weapons.

The program funder, Defense Advanced Research Projects Agency (DARPA), says the end goal is to improve agriculture by genetically modifying crops in the field using insects. But critics worry that it could easily be weaponized.

“Everyone’s heard of genetically modified crops, but DARPA is presenting the idea that this technology is not flexible or rapid enough,” said Guy Reeves, a post-doctoral genetics researcher at the Max Planck Institute for Evolutionary Biology in Germany and one of the authors of the critical report.

The idea is to protect food crops from diseases, pests, herbicides, and drought, and other threats. The agency is funding research to find out if genetic modifications that are usually done in the lab could instead be done in the field by insects.

“On the fly,” Reeves added.

The insects would distribute new genes to the crops by delivering a virus engineered to edit the genome of the plants using CRISPR technology.

Reeves said introducing complex traits by genetic engineering in the field is too difficult and unlikely to succeed.

“But if you wanted to cause harm to the plant, you don’t really need to introduce genes. All you need to do is knock out a single essential gene,” he said. “It’s very hard to imagine you wouldn’t very much earlier develop the knowledge necessary to develop biological weapons, which could either kill growing plants or sterilize growing plants.”

Reeves said the technology, once developed, could fall into the wrong hands. And DARPA is the only one funding this kind of work, according to Reeves.

“There’s always a risk-reward way that you have to look at this,” responded Blake Bextine, the DARPA program manager for Insect Allies. “Making sure that we are a food-secure population, we are really going to require some of these new tools.”

Bextine said that Insect Allies is following all federal and international safety protocols, including the use of three ‘kill switches’ in the insects, which would prevent them from proliferating out of control.

He said an approach like Insect Allies would have been useful in combatting a pest like the fall armyworm, which is currently eating cereal crops in Africa.

“It was introduced in April of 2017 and quickly spread to almost half the continent,” he said. “These problems can pop up very quickly and sometimes unforeseen.”

An international group of scientists and legal scholars are warning that a federal research program called Insect Allies could unintentionally lead to biological weapons. The program funder, Defense Advanced Research Projects Agency (DARPA), says the end goal is to improve agriculture by genetically modifying crops in the field using insects. But critics worry that it could easily be weaponized.

Why the IPCC Report is so Scary

Get $20 off your contacts at https://simplecontacts.com/secondthought or enter code ‘secondthought’ at checkout Link to IPCC report: http://www.ipcc.ch/report/sr15/ Link to companies responsible for most emissions: https://goo.gl/bFdwi4 Why the IPCC Report is so Scary – Second Thought

Funded by a federal Institute of Museum and Library Services (IMLS) National Leadership Grant, and a private donation, the first installation of PCO was launched in 2002.

A catalyst for change

The Next Generation Of Maps, NPR – WBUR – On Point

“The Next Generation Of Maps,”
NPR – WBUR – On Point, (21 June 2012).
Time was, a good map was rolled out in captain’s quarters on a rolling sea or a king’s table far from the front. Splotched with gravy. Embellished with mermaids. A grand, rough approximation of the world as we knew it. Flash forward to the smartphone in your pocket, the apps all over, the future rushing at us, and we’ve got maps gone wild.

Cartography on digital steroids. Maps loaded with terabytes of data. 3D maps. Maps you can zoom over, zoom into. Walk through. Now Google and Apple are squaring off over the next great map frontier.

[For a brief online discussion of the integration of the new mapping technology with the study of history and culture see:

The Ring of Fire
Published on Oct 28, 2018
The New York Attorney General has filed a lawsuit against Exxon Mobil on behalf of the company’s shareholders over their climate change denial and cover up that went on for decades. This move by the company is going to cost shareholders lots of money, and therefore this lawsuit may have a great chance at being successful. The company knew the dangers of climate change, but hid them from everyone, including their own investors, and now those decisions are coming back to haunt them. Ring of Fire’s Farron Cousins discusses this.

The EPA Has Completely Stopped Doing Their Job

EPA has almost completely stopped doing their job this time last year, which means that our air is getting dirtier, our water is more polluted, and our overall health is deteriorating. Ring of Fire’s Mike Papantonio and Peter Mougey discuss this issue.