Robert Reich: Why the Common Good Disappeared and How We Get It Back

(Visit: http://www.uctv.tv/) Professor Robert B. Reich ignites a discussion of the good we have had in common, what happened to it, and what we might do to restore it. His goal is not that we all agree on the common good. It is that we get into the habit of thinking and talking about it, listening to each other’s views and providing a means for people with opposing views to debate these questions civilly. Recorded on 10/12/2018. Series: “The UC Public Policy Channel” [Show ID: 34200]

Migrant caravan “made to order for Trump” midterm campaign

U.S. President Donald Trump said on Monday that he had alerted the military and federal border authorities that a U.S.-bound migrant caravan from Central America was a national emergency.

[Like many of the world’s post-Columbian cities Boston
is facing a massive problem with rising sea-levels.
On 17 October 2018 the Mayor of Boston
proposed this response.]

Martin J. Walsh, a lifelong advocate for working people and a proud product of the City of Boston, was sworn in as the City’s 54th Mayor in January of 2014. Mayor Walsh’s vision is of a thriving, healthy, and innovative Boston – a city with equality and opportunity for all, where a revolutionary history inspires creative solutions to the world’s hardest challenges. Since taking office he has worked to create good jobs, great schools, safe streets, and affordable homes, while building a more responsive, representative, and transparent city government. In addition, he invited the people of Boston to help build a blueprint for the city’s future in Imagine Boston 2030, the first citywide plan in half a century.

The Law-Makers & The Laws of Nature: Can the Human Community Survive Its Public Leadership in the 21st Century? | EV & N 289 | CCTV 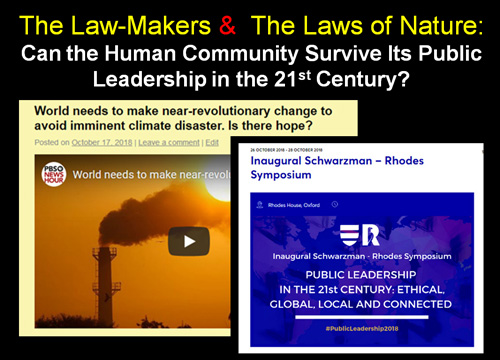 Can humanity survive its leaders? Law-makers who think they are in charge of the ecosystem are profoundly deluded.  Humanity will not survive their folly.