Boston is getting a new plan to combat the effects of climate change. Mayor Marty Walsh on Wednesday unveiled his “Resilient Boston Harbor” proposal.

Walsh says his plan is not just a comprehensive strategy to protect the city from climate change flooding, but a transformative vision that will add 67 acres of greenspace to Boston’s 47-mile shoreline.

The idea is to build seawalls and natural barriers, and elevate roads in low-lying areas by as much as 7 feet to prevent flooding from rising sea levels. A redesign of Morrissey Boulevard in Dorchester is one proposal in the plan.

“This is about prevention,” Walsh told reporters in a briefing Tuesday. “Making investments in this type of work is the key to our city.” 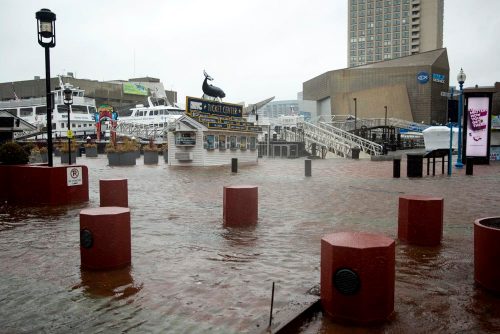 The mayor couldn’t say how much the harbor resiliency plan will cost, but says it’ll require funds from the state, federal government, companies and philanthropies.

The idea is to spend millions to save billions.

“The investments you make now are the savings of tomorrow,” Walsh said.

One example the mayor gave was spending $160 million to make East Boston more resilient to flooding, saying it could prevent $450 million in damages in the future.

The mayor all but buried the idea of building a barrier in the harbor. That’s after a feasibility study from UMass Boston researchers advised against such a barrier. 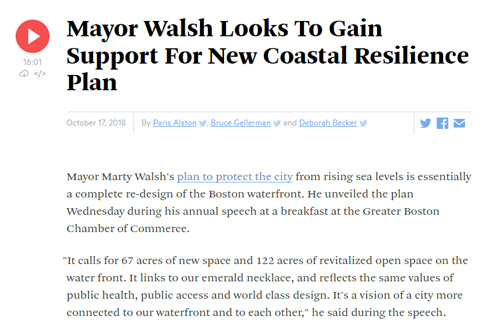 Mayor Marty Walsh’s plan to protect the city from rising sea levels is essentially a complete re-design of the Boston waterfront. He unveiled the plan Wednesday during his annual speech at a breakfast at the Greater Boston Chamber of Commerce.

“It calls for 67 acres of new space and 122 acres of revitalized open space on the water front. It links to our emerald necklace, and reflects the same values of public health, public access and world class design. It’s a vision of a city more connected to our waterfront and to each other,” he said during the speech.

Nearly 700 people attended the breakfast, and he received a standing ovation from business leaders — one group whose support he’ll need as he works to make his vision a reality. 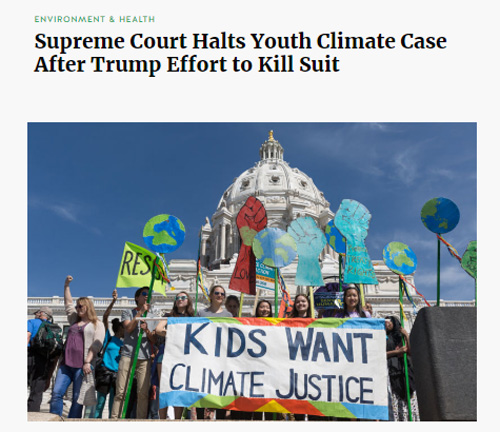 In a move author and activist Naomi Klein denounced as “disgraceful and enraging,” the US Supreme Court has halted a lawsuit brought by 21 American children and young adults that aims to hold the federal government accountable for its ongoing failure to adequately curb greenhouse gas emissions to battle the global climate crisis.

The decision came in response to a last-ditch effort by the Trump administration to kill the “potentially landmark” case ahead of the trial slated to begin in the US District Court for the District of Oregon on Oct. 29.

The case has been tied up in the legal system for three years. Just this week, District Court Judge Ann Aiken reaffirmed that the youth plaintiffs can credibly claim that the government has violated their due process rights. The Supreme Court, however, stayed discovery and the trial in an order (pdf) issued Friday, demanding a response from the plaintiffs’ legal counsel by Wednesday afternoon.

Michael Gerrard, director of Sabin Center for Climate Change Law at Columbia, called the move “highly unusual” and “reminiscent of their stay of the Clean Power Plan.”

Farron Cousins, a radio host and executive editor of The Trial Lawyer magazine, tied the development to the upcoming midterms, tweeting: 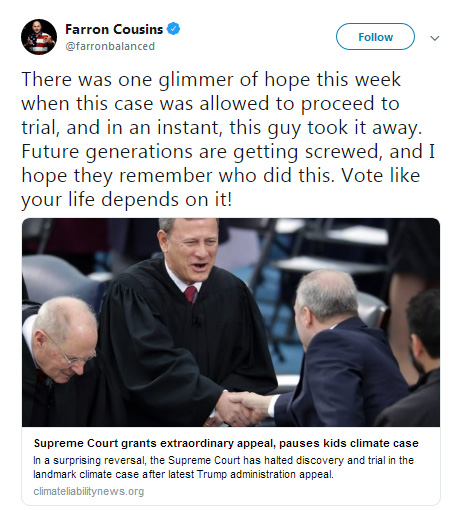 While the high court’s one-page order provoked public outrage, Julia Olson of Our Children’s Trust, co-counsel for the youth plaintiffs, remained optimistic and said the team plans to file their reply on Monday.

“We are confident once Chief [John] Justice Roberts and the full court receive the youth plaintiffs’ response to defendants’ mischaracterization of their case, the trial will proceed,” she said. “As the Supreme Court has recognized in innumerable cases, review of constitutional questions is better done on a full record where the evidence is presented and weighed by the trier of fact. This case is about already recognized fundamental rights and children’s rights of equal protection under the law.”

As E&E News noted, “Roberts’ action came hours after Jeffrey Wood, a top political appointee at the Department of Justice, said there is no such right. Speaking at a law conference in San Diego, Wood said the right to a safe climate that the plaintiffs demand ‘simply does not exist,’ adding that the government is still preparing for trial.”

Several observers pointed out that the Supreme Court had previously allowed the case to proceed, back before the contentious new Justice Brett Kavanaugh replaced now-retired Anthony Kennedy. Environmental attorney Jeffrey Gracer remarked: “A newly configured Supreme Court seems poised to close the courthouse doors. But the tide of #ClimateAction cannot be stopped.”

In his first salvo against Obama-era climate policy, President Donald Trump signed an executive order at the Environmental Protection Agency to suspend, rescind or open review more than a half dozen major regulations, in an effort to help the coal, oil and gas industries. That includes the Clean Power Plan, which restricts greenhouse gas emissions at coal-fired power plants. John Yang reports.

A Trump Presidency And The Future Of Climate Change | TIME

Donald Trump has repeatedly indicated that environmentalism is not his priority. Now, Climate scientists, policymakers and diplomats are questioning how his presidency will shape the future of climate change policy.

We Have 12 Years to Act on Climate Change, IPCC Report Finds

Bernie Sanders: We’ve only got 12 years to stop climate change. I’m introducing a bill to do so.