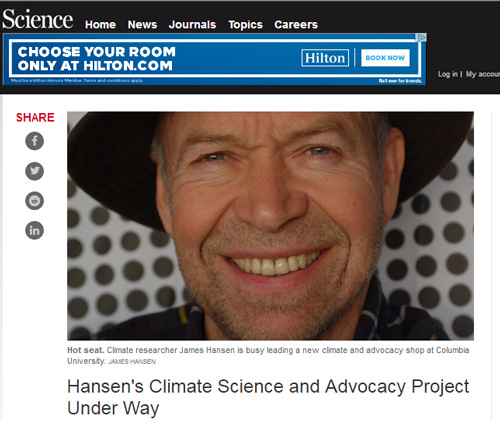 James Hansen may have retired from NASA but he’s still active in the climate change wars. Five months into its existence, his Program on Climate Science, Awareness and Solutions at Columbia University is moving ahead on its unique goals. Led by the 72-year-old climate scientist, the initiative focuses on bringing policy-relevant science to the public, building on dogged—and often controversial—efforts along those lines by its director. Some climate scientists devote part of their time, or just lip service, to advocacy or outreach; the program makes these tasks integral to its scientific mission.

The intent for the program’s three-person team, all of whom previously worked at NASA’s Goddard Institute for Space Studies (GISS) at Columbia University, is to continue science, outreach, and advocacy work on climate change but without the limitations that come with a federal job, like working on agency priorities, managing a big lab, or avoiding political activities during work. Text from a recent proposal to a foundation, shared with ScienceInsider, makes clear that Hansen’s group wants to have a political impact. It assails the position “that scientists should not go all the way to describing policy implications of their research.” Instead, it asserts, “The objectivity of science is particularly effective in ferreting out the relative merits of alternative policies.” “The centerpiece of our project remains scientific research,” says Pushker Kharecha, Hansen’s deputy. The team’s studies, according to the proposal text, seek to “connect the dots from advancing basic climate science to promoting public awareness to advocating policy actions.”

As of 2014, Hansen directs the Program on Climate Science, Awareness and Solutions at Columbia University’s Earth Institute. The program is working to continue to “connect the dots” from advancing basic climate science to promoting public awareness to advocating policy actions.