The Guardians: Kingman Brewster, His Circle, and the Rise of the Liberal Establishment: Geoffrey Kabaservice 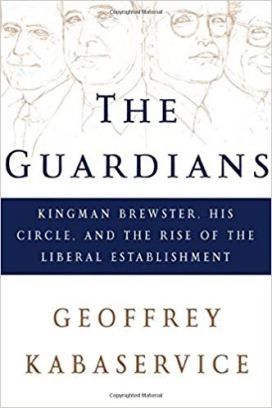 Yale’s Kingman Brewster was the first and only university president to appear on the covers of Time and Newsweek, and the last of the great campus leaders to become an esteemed national figure. He was also the center of the liberal establishment—a circle of influential men who fought to keep the United States true to ideals and extend the full range of American opportunities to all citizens of every class and color.

Using Brewster as his focal point, Geoffrey Kabaservice shows how he and his lifelong friends—Kennedy adviser McGeorge Bundy, Attorney General and statesman Elliot Richardson, New York mayor John Lindsay, Bishop Paul Moore, and Cyrus Vance, pillar of Washington and Wall Street—helped usher this country through the turbulence of the 1960s, creating a legacy that still survives.

In a narrative that is as engaging and lively as it is meticulously researched, The Guardians judiciously and convincingly reclaims the importance of Brewster and his generation, illuminating their vital place in American history as the bridge between the old establishment and modern liberalism.

Does the intensity of this year’s hurricane season tell us anything about the occurrence of extreme weather events? David Grossman reports on whether climate change might be having an impact. Newsnight is the BBC’s flagship news and current affairs TV programme – with analysis, debate, exclusives, and robust interviews.

There are already fears it could take weeks and tens of millions of dollars to clean up the devastation from now Tropical Storm Florence. It has many in the environmental community wondering what can be done to stop what seems to be a vicious cycle of deadly and destructive storms. John Blackstone reports.

Breakout sessions from the Yerba Buena Center for the Arts, including:

Session 2: What We Eat and How It’s Grown: Food Systems and Climate

Session 3: Grounded: Locking Up Carbon with Restoration and Conservation

UN pushes countries to act in fight against climate change