The purpose of this report is to imagine the unthinkable to push the boundaries of current research on climate change so we may better understand the potential implications on United States national security. We have interviewed leading climate change scientists, conducted additional research, and reviewed several iterations of the scenario with these experts. The scientists support this project, but caution that the scenario depicted is extreme in two fundamental ways. First, they suggest the occurrences we outline would most likely happen in a few regions, rather than on globally. Second, they say the magnitude of the event may be considerably smaller. We have created a climate change scenario that although not the most likely, is plausible, and would challenge United States national security in ways that should be considered immediately.

The State, The Military and The Global Climate Crisis: The U.S. Military Has Taken the Lead on Climate Change, But What Happens Next? | EV & N – 286 | CCTV

The U.S. military has understood the science and social implications of climate change more thoroughly than the the Commander-in-Chief or the U.S. Congress — both of whom it has to answer to, on the one hand for its orders, and on the other for its budget.

This creates an uneasy tension of differing perspectives within the structure of the U.S. government about what needs to be done to respond to climate change.

and foreign press reporting about America:

What Nuclear War Would Look Like From Bill Perry (HBO)

Published on Mar 21, 2017
As Secretary of Defense under President Clinton, Bill Perry has spent most of his life watching the world prepare for nuclear war. And given the current political climate, he thinks the world isn’t nearly as scared as it should be.

Since the dawn of the nuclear age in the 1940s, most of the worlds nuclear capability was split between the U.S. and Russia. The umbrella of American protection meant that its allies didn’t have to develop nukes of their own.

But that appears to be changing.

President Donald Trump has been less hawkish about standing up to Russia. Now, European Union is reportedly considering a nuclear deterrent of its own. During the first week of March — after reports came out that as he left office, President Barack Obama warned Trump that North Korea would be “the most urgent” problem — North Korea fired four missiles that landed just 200 miles from Japan.

All of this has experts, including Perry, worried about an era of renewed nuclear threat from jittery states and rogue actors. Perry often talks about his nightmare scenario: a small amount of enriched uranium falling into the hands of a terrorist group.

“I think of all of the nuclear catastrophes that could happen, this is the most probable,” the 89-year-old said. “I think, I would say, there’s probably an even chance, this would happen sometime in the next 10 years.”

Secretary William Perry: “My Journey at the Nuclear Brink” | Talks at Google

“My Journey at the Nuclear Brink” is a continuation of William J. Perry’s efforts to keep the world safe from a nuclear catastrophe. It tells the story of his coming of age in the nuclear era, his role in trying to shape and contain it, and how his thinking has changed about the threat these weapons pose.

In a remarkable career, Perry has dealt firsthand with the changing nuclear threat. Decades of experience and special access to top-secret knowledge of strategic nuclear options have given Perry a unique, and chilling, vantage point from which to conclude that nuclear weapons endanger our security rather than securing it.

This book traces his journey from the Cuban Missile Crisis to crafting a defense strategy in the Carter Administration, to offsetting the Soviets’ numeric superiority in conventional forces to the dismantling of more than 8,000 nuclear weapons in the Clinton Administration, and to his creation in 2007 — with George Shultz, Sam Nunn, and Henry Kissinger — of the Nuclear Security Project to articulate their vision of a world free from nuclear weapons. 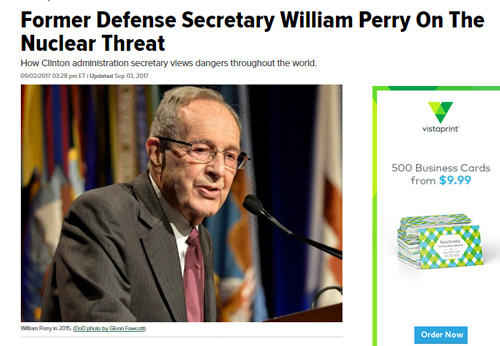 William Perry has had a long career in government, serving in the Pentagon under Presidents Carter and Reagan before becoming President Clinton’s secretary of defense in 1994.

“We stand today, I believe, in greater danger of nuclear catastrophe than we faced during the Cold War,” Perry tells host Robert Scheer in this week’s episode of KCRW’s “Scheer Intelligence.”

Since his time in the Pentagon, Perry has founded the William J. Perry Project, which aims to educate the public about the dangers of nuclear weapons. He’s also written a book, “My Journey at the Nuclear Brink.”

Perry and Scheer discuss how the expansion of NATO in the 1990s factors in to the rising tensions between the U.S. and Russia. Perry calls this expansion “the first step” in escalating tensions. The “second step,” he says, was “installing ballistic missile defense systems in Eastern Europe.”

“Our response to Russia on the objections to these various actions we were taking basically was, ‘What can you do about it? You’re an insignificant power today,’ ” Perry says. “The reason Putin is so popular today is that he has taken actions that, in [Russians’] view, allow Russia to stand as a great power and overcome this humiliating position they were in … so we stand today in a position of hostility between the United States and Russia, comparable to where we stood in the Cold War. In the meantime, we still have many thousands of nuclear weapons.”

The conversation concludes with a discussion on the possibility of nuclear war with North Korea.

“This regime is ruthless, and reckless, but they are focused entirely on their own survival,” Perry says of North Korea. “They’re not going to be conducting a preemptive attack on the United States or Tokyo or Seoul. They’re going to use [nuclear weapons] to threaten and bluster.”

Listen to the full interview and to past editions of “Scheer Intelligence” at KCRW.com

On 26 September 1983, the nuclear early-warning system of the Soviet Union reported the launch of multiple USAF Minuteman intercontinental ballistic missiles from bases in the United States. These missile attack warnings were correctly identified as a false alarm by Stanislav Yevgrafovich Petrov, an officer of the Soviet Air Defence Forces. This decision is seen as having prevented a retaliatory nuclear attack based on erroneous data on the United States and its NATO allies, which would have probably resulted in immediate escalation of the cold-war stalemate to a full-scale nuclear war. Investigation of the satellite warning system later confirmed that the system had malfunctioned.

Soviet intelligence services went on alert in 1981 to watch for US preparations for launching a surprise nuclear attack against the USSR and its allies. This alert was accompanied by a new Soviet intelligence collection program, known by the acronym RYAN, to monitor indications and provide early warning of US intentions. Two years later a major war scare erupted in the USSR. This study traces the origins and scope of Operation RYAN and its relationship to the war scare.

Some observers dismissed the alert and the war scare as Soviet disinformation and scare tactics, while others viewed them as reflecting genuine fears. The latter view seems to have been closer to the truth. The KGB in the early 1980s saw the international situation–in Soviet terminology, the “correlation of world forces”–as turning against the USSR and increasing its vulnerability. These developments, along with the new US administration’s tough stance toward the USSR, prompted Soviet officials and much of the populace to voice concern over the prospect of a US nuclear attack.

Concerning the role of Stanislav Petrov

The role of Stanilav Petrov and his “dereliction of duty” in the events of 1983 is particularly revealing — and disturbing.

Early on the morning of Sept. 26, 1983, Stanislav Petrov helped prevent the outbreak of nuclear war.

A 44-year-old lieutenant colonel in the Soviet Air Defense Forces, he was a few hours into his shift as the duty officer at Serpukhov-15, the secret command center outside Moscow where the Soviet military monitored its early-warning satellites over the United States, when alarms went off.

Computers warned that five Minuteman intercontinental ballistic missiles had been launched from an American base.

The alarm sounded during one of the tensest periods in the Cold War. Three weeks earlier, the Soviets had shot down a Korean Air Lines commercial flight after it crossed into Soviet airspace, killing all 269 people on board, including a congressman from Georgia. President Ronald Reagan had rejected calls for freezing the arms race, declaring the Soviet Union an “evil empire.” The Soviet leader, Yuri V. Andropov, was obsessed by fears of an American attack.

Colonel Petrov was at a pivotal point in the decision-making chain. His superiors at the warning-system headquarters reported to the general staff of the Soviet military, which would consult with Mr. Andropov on launching a retaliatory attack.

After five nerve-racking minutes — electronic maps and screens were flashing as he held a phone in one hand and an intercom in the other, trying to absorb streams of incoming information — Colonel Petrov decided that the launch reports were probably a false alarm.

As he later explained, it was a gut decision, at best a “50-50” guess, based on his distrust of the early-warning system and the relative paucity of missiles that were launched.

Colonel Petrov died at 77 on May 19 in Fryazino, a Moscow suburb, where he lived alone on a pension. The death was not widely reported at the time. It was confirmed by his son, Dmitri, according to Karl Schumacher, a political activist who, after learning in 1998 of Colonel Petrov’s Cold War role, traveled to Russia to meet him and remained a friend. The cause was hypostatic pneumonia.

This excerpt was part of a longer discussion about humankind’s precarious position in the face of instant annihilation.

This excerpt was, in turn, taken from a more lengthy speech in Germany.