This talk was given at a local TEDx event, produced independently of the TED Conferences. It is now well known that sea ice in the Arctic has changed in both extent and thickness over the past several decades. In fact the change in sea ice is seen as one of the key global climate variables confirming model estimates of global scale warming of our planet through the Intergovernmental Panel on Climate Change (IPCC) process. Extensive investigations at the leading edge of Arctic System Science have recently uncovered a number of surprises, many somewhat counterintuitive, each having significant consequences in the Arctic and through teleconnections to the rest of our planet. In this talk I will review the rate and magnitude of change in sea ice, put this into the context of our understanding of the ‘natural variability’ in sea ice over the past several thousand years. I will then review seven surprising impacts of this change: 1) increasing coverage of young ice significantly changes atmospheric chemistry; 2) more snow both preserves and destroys ice; 3) Polar bear habitat can actually improve in some areas while deteriorating in others; 4) match-mismatch timing in the marine ecosystem increases vulnerability; 5) uncertainty as to whether the Arctic ocean will increase or decrease in overall productivity is a key unknown; 6) evidence that ice hazards are actually increasing while the world marshals to increase development of Arctic resources; and 7) evidence that our recent cold winters are actually linked to our warming Arctic.

Dr. Barber obtained his Bachelors and Masters from the University of Manitoba, and his Ph.D. from the University of Waterloo, Ontario. He was appointed to a faculty position at the University of Manitoba in 1993 and received a Canada Research Chair in Arctic System Science in 2002. He is currently Associate Dean (Research), CHR Faculty of Environment, Earth and Resources. Dr. Barber has extensive experience in the examination of the Arctic marine environment as a ‘system’, and the effect climate change has on this system. Dr. Barber has published over 200 articles in the peer-reviewed literature pertaining to sea ice, climate change and physical-biological coupling in the Arctic marine system. He led the largest International Polar Year project in the world, known as the Circumpolar Flaw Lead system study. He is recognized internationally through scientific leadership in large network programs such as NOW, CASES, ArcticNet, and the Canadian Research Icebreaker (Amundsen), as an invited member of several Natural Sciences and Engineering Research Council national committees, international committees and invitations to national and international science meetings. Dr. Barber was instrumental in a national competition to bring a Canada Excellence Research Chair (CERC) to the University of Manitoba in the field of Arctic Geomicrobiology and Climate Change. As a member of the Centre for Earth Observation Science he leads a polar marine science group of over 100 people

According to analysis by NASA and the National Snow and Ice Data Center, the Arctic sea ice maximum extent was reached on 17 March 2018. The Arctic sea ice cover peaked at 14.48 million square kilometers (5.59 million square miles), making it the second lowest maximum on record, at about 60,000 square kilometers (23,000 square miles) higher than the record low maximum reached on 7 March 2017 (see https://www.youtube.com/watch?v=a8egd… ) The yellow line in the comparison indicates the 30 year average maximum extent calculated from 1981 through 2010. The date is shown in the upper left corner.

The death toll from Hurricane Florence has reached 32, while the rivers in the Carolinas continue to rise from the record-breaking storm. Tens of thousands of homes have been damaged. The city of Wilmington, North Carolina, remains largely cut off from the rest of the state. On Monday, North Carolina Governor Roy Cooper warned the worst flooding may still be to come.

Governor Roy Cooper: “This is an epic storm that is still continuing because the rivers are rising in certain parts of our state. Some areas have not seen the worst flooding yet. So this is a monumental disaster for our state that affects many of our counties, many of our people.” 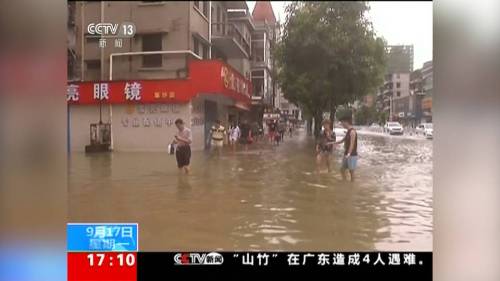 Meanwhile, a massive typhoon in Southeast Asia has killed at least 74 in the Philippines and forced more than 3 million people to evacuate their homes in China. Scores more are feared dead following a landslide in the small Philippines mining town of Itogon. Many died in a chapel where they had taken shelter.

Meanwhile in Nigeria, at least 100 people have died as torrential downpour and floods continue to plague the south and central regions of the country. A national disaster has been declared in the most affected regions. Residents in the south-central port city of Lokoja were displaced due to the flooding. This is Blessing Solomon.

Blessing Solomon: “When the water was coming, we were thinking that maybe this was just an ordinary rain water, so we didn’t even think that maybe the water will come like this, you understand? So, just like the first room, the water that entered the first room, we thought this was a joke. Then, when the water came to my own room, that was when we knew that, yes, the water is very serious, you understand? So, everybody just like packed, because—even some people don’t even have where to go, just like me. I don’t have where to go, but I was just like, let me just squat with some of my friends in Felele.”

The death toll from Hurricane Florence has risen to 35, while the flooding is worsening in some parts of North Carolina. President Trump is heading to North Carolina today, where some 10,000 people are still living in shelters and nearly 350,000 are without power. Meanwhile in South Carolina, two women detainees died Tuesday when they were being transported in a sheriff’s van which was overcome by floodwaters. The women were both mental health patients being detained for medical transport. Two sheriff’s deputies in the vehicle were able to be rescued from the rising waters. 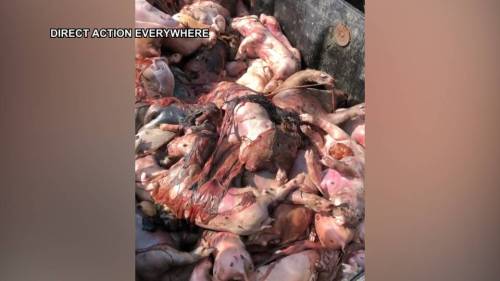 Animal rights activists have released shocking video footage from factory farms in North Carolina that were flooded during Hurricane Florence. Activists from the group Direct Action Everywhere say they found barns with thousands of drowned chickens and dumpsters filled with dead piglets.

Activist: “As you can see, there are thousands of baby piglets in these dumpsters outside of these pig facilities, dumped like garbage into giant metal dumpsters.”

Communities across Puerto Rico are holding memorials across the island today to mark the first anniversary of Hurricane Maria, the devastating storm that killed thousands and caused the longest blackout in U.S. history. Puerto Rico’s governor recently updated the death toll from the storm to 2,975 people, after multiple news outlets and universities demonstrated that thousands of people died during the days and weeks after Maria. A Harvard study estimates the death toll might be as high as 4,645. But last week President Trump claimed the death numbers were inflated by Democrats to make him look bad. He said the government’s response to the storm was an “incredible unsung success.” In Puerto Rico, local residents criticized Trump’s comments. Sharon Nunez Cortez is a resident of Barceloneta.

Sharon Nunez Cortez: “Well, how can [Trump] give an opinion if he hasn’t come to see the misfortune that is our reality? Because he came and was interviewed in an area where there wasn’t a disaster. They should have taken him to where there was a disaster, where helicopters had to rescue people who couldn’t leave their homes because there was nowhere to go. There were floods that even swept away bridges. But he is giving his opinion from the comfort of his chair without knowing what really happened.”

You may know Megan Boone as an actor on The Blacklist. She’s also a mother, and she’s taking action to protect her daughter’s future. Join her at www.TheYearsProject.com/Vote Made in partnership with Environmental Voter Project.

“A level of bleakness” in World Bank Report on Poverty

Tom Steyer of NextGen America talks divestment with Climate One. Divestment from fossil fuels on the part of major institutions, he says, makes an important statement regardless of its capital impacts for the industry.

The Arctic Blue-Ocean-Event (BOE). When? Then What?

We are hurtling towards the Blue Ocean Event (BOE) in the Arctic. Nobody knows for sure when it will happen.

From my analysis, which I discuss in this video, my best guess is that the BOE will happen in 2022. There will be essentially NO sea ice in the Arctic Ocean for a few weeks to a month in September, 2022.

After this BOE happens, then what will follow in subsequent years? I think that by BOE+2 years the Arctic Ocean will be ice free for August, September, and October. By BOE+4 years it will be ice free for 5 months, and by BOE+10 years the Arctic Ocean will be free of sea ice year round. During this decade of gut-wrenching transition, our climate and weather patterns will be profoundly disrupted, chaotic, and unstable, for example presenting enormous risks to our global food supply.. I am not paid by anybody for my work analyzing and producing these videos. Please consider donating at http://paulbeckwith.net to support my efforts at educating the public on the risks that we collectively face.

The climate is changing, but what’s been the reaction in Germany & USA? So my question for you is: Climate change is of course a gigantic topic, and it’s impossible to squeeze everything into this kind of a video, so it would be really great if the conversation could continue down in the comments. What kind of signs of climate change have you seen where you live and what actions have the people or the government taken to help the environment? Also what are some of the little things that you maybe try to do every day to save energy or just help the planet in general? I would love to hear your thoughts and ideas.

It’s Okay To Be Smart: Climate Science: What You Need To Know https://youtu.be/ffjIyms1BX4

2veritasium: 5 Bad Reasons to Ditch the Paris Climate Agreement https://youtu.be/1WKoj-kodBw vlogbrothers: The Paris Accord: What is it? And What Does it All Mean? https://youtu.be/Sr2J_1J9w3A

It’s Okay To Be Smart: Why People Don’t Believe In Climate Science https://youtu.be/y2euBvdP28c

Kurzgesagt – In a Nutshell: The Gulf Stream Explained https://youtu.be/UuGrBhK2c7U

Why Are Republicans the Only Climate-Science-Denying Party in the World? http://nymag.com/daily/intelligencer/…