The rain will not let up on the East Coast for another 24 hours and the preliminary rainfall totals so far are staggering. The National Weather Service says more than 30 inches of rain has fallen in Swansboro, North Carolina. Thousands are under evacuation and nearly a million homes and businesses are without power. Adriana Diaz reports.

View of the damage from Hurricane Florence from above

In North Carolina, more than 4,000 homes were damaged and some were completely destroyed. .

Are insurers prepared to cover damage from Florence?

Even as development continues near the coasts, some national home insurance companies are pulling away from those areas, leaving home and business owners to rely on government-subsidized flood insurance. But the potential damage from Tropical Storm Florence may require additional money—from taxpayers who live far from disaster-struck areas. ProPublica’s Talia Buford joins Hari Sreenivasan.

Alexandria Ocasio-Cortez, Democratic candidate for New York’s 14th Congressional District, lays out her vision at Netroots Nation for how she plans to beat big money with “big organizing.”

CGTN’s Asieh Namdar spoke with Jeff Masters from IBM’s Weather Underground about the impact that Hurricane Florence had on the U.S. east coast, the lives lost and the damage to the region.

Super Typhoon Mangkhut, which is being called the strongest storm of 2018, has left a trail of destruction across the Philippines, Hong Kong, and southern China.

Dr. Marc Futernick is the medical director of his hospital’s emergency department. One of his biggest concerns is climate change, because of the surge of patients he sees when heatwaves hit. That’s why he’s a climate voter. Join him: www.TheYearsProject.com/vote Made in partnership with Environmental Voter Project.

At least 17 people in North and South Carolina have been reported killed by Tropical Depression Florence, which has broken all of North Carolina’s rainfall records. Officials are warning that the worst of the storm may still be yet to come, as catastrophic flooding inundates the Carolinas coast. Up to 20,000 people are in emergency shelters in North Carolina alone. This is North Carolina Governor Roy Cooper.

Gov. Roy Cooper: “Floodwaters are still raging across parts of our state, and the risk to life is rising with the angry waters. As this storm continues to churn through North Carolina, it has dumped nearly two feet or more of rain in many places. The strongest storm bands are dumping two to three inches of rain per hour. That’s enough to cause flooding in areas that have never flooded before, until now.”

Experts have warned Florence could also cause widespread environmental damage and toxic spills from coal ash dumps, hog manure lagoons, chicken farms and nuclear facilities in North and South Carolina. Torrential rains have already caused a collapse at a coal ash landfill at an inactive Duke Energy power plant. Duke Energy says 2,000 cubic yards of ash were released and could run off into the nearby Cape Fear River. 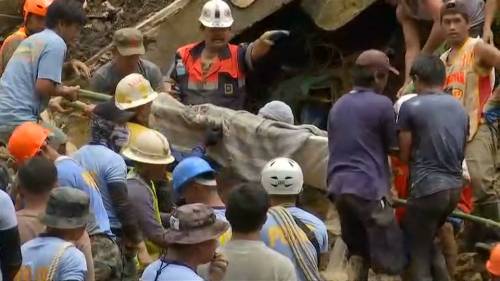 In Asia, Typhoon Mangkhut continued to wreak destruction in its path, reaching mainland China after ripping though the Philippines and Hong Kong. Authorities say the storm has killed at least 69 people so far, with the death toll expected to rise. Over the weekend, authorities found 43 bodies buried in a landslide near a gold mine in the Philippines; officials say as many as 100 people may have died in this landslide alone. Meanwhile, in China, more than 3 million people have been evacuated from the path of the storm. So far, at least four people have reportedly died in China from the storm, which has now been downgraded to a tropical depression.

The head of FEMA, the Federal Emergency Management Agency, is trying to defend President Trump, who sparked outrage last week by falsely claiming that thousands of people did not die in Puerto Rico last year in the wake of Hurricane Maria. This is FEMA Administrator Brock Long, speaking on CBS’s “Face the Nation.”

Brock Long: “These studies are all over the place. The Harvard study was done differently, studies a different period of time versus the George Washington study. There’s a big discrepancy, whether it’s direct deaths or indirect deaths.”

FEMA Administrator Brock Long also spoke on NBC’s “Meet the Press,” in which he suggested that some of the post-Maria deaths may be attributed to spousal abuse, saying, “You can’t blame spousal abuse after a disaster on anybody.”

Brock Long: “You know, the other thing that goes on, there’s all kinds of studies on this that we take a look at. Spousal abuse goes through the roof. You can’t blame spousal abuse, you know, after a disaster on anybody.”

The official death toll from Hurricane Maria stands at 2,975. One Harvard study has estimated that the death toll might be as high as 4,645 people.

Why we need a World Food Safety Day

Food and Agriculture Organization of the United Nations
Published on Sep 17, 2018

http://www.fao.org/fao-who-codexalime… The proposal to proclaim 7 June as ‘World Food Safety Day’ has received the support of the Codex Alimentarius Commission, FAO and WHO. In this video, Sarah Cahill explains why and invites others to share similar video messages on Twitter using the hashtag #WorldFoodSafetyDay.