In 2008, in the throes of the global financial crisis, the British monarch, Queen Elizabeth II, received a briefing on the turmoil in the international markets from academics at the London School of Economics. She posed a devastatingly simple question to them: “Why did no one see it coming?” Her slightly flummoxed academic host replied “Because at every stage, someone was relying on somebody else and everyone thought they were doing the right thing.”

We don’t know whether that answer satisfied the Queen but four years later a group of students at Manchester University in northwest England registered their acute dissatisfaction with the failure of the economics profession as a whole to forecast the crisis and warn policymakers, companies and individuals of the dangers they were facing. They formed an association called the Post-Crash Economics Society — to lobby for changes in the teaching of the discipline.

“I wanted to study economics to make sense of this big issue – the financial crisis — which nobody really seemed to have foreseen, nobody really seemed to understand at the time,” said Cahal Moran, one of the founders of the society. “But I was very disappointed. In the first year of economics at Manchester, the financial crisis wasn’t even mentioned.”

Maeve Cohen, a fellow student at Manchester, was also appalled by the omission.

“I find it completely inexcusable that the global financial crisis, four years after it happened, wasn’t mentioned in the core economics modules. It was absolutely unforgivable in my opinion,” Cohen told Marketplace.

World Weather Attribution (WWA) is an international effort to analyze and communicate the possible influence of climate change on extreme weather events, such as storms, extreme rainfall, heat waves, cold spells, and droughts.

Recognizing society’s interest in reducing the human, economic, and environmental costs of weather-related disasters, WWA delivers timely and scientifically reliable information on how extreme weather may be affected by climate change.

WWA is a partnership of the University of Oxford Environmental Change Institute (Oxford ECI), the Royal Netherlands Meteorological Institute (KNMI), the Laboratoire des Sciences du Climate et de l’Environment (LSCE), the University of Princeton, the National Center for Atmospheric Research (NCAR) and the Red Cross Red Crescent Climate Centre (the Climate Centre). WWA was initiated in late 2014 after the scientific community concluded that the emerging science of extreme event attribution could be operationalized.

Identifying a human fingerprint on individual extreme weather events —“probabilistic extreme event attribution” — has been an important goal of the scientific community for more than a decade. In 2004, Prof. Peter Stott of the UK Met Office and his colleagues, published a paper in Nature showing that climate change had at least doubled the risk of the record-breaking 2003 European summer heat wave that resulted in the deaths of tens of thousands of people.

Since then, advances in the field have prompted numerous studies, leading the Bulletin of the American Meteorological Society (BAMS) to dedicate an annual special issue to extreme event attribution for the past four years. The 2016 BAMS special issue, Explaining Extreme Events of 2015 from a Climate Perspective, stated that “The science has now advanced to the point that we can detect the effects of climate change on some events with high confidence .“ In addition, the National Academies of Sciences, Engineering and Medicine issued a report in 2016, Attribution of Extreme Weather Events in the Context of Climate Change, that states, “In the past, a typical climate scientist’s response to questions about climate change’s role in any given extreme weather event was ‘we cannot attribute any single event to climate change.’ The science has advanced to the point that this is no longer true as an unqualified blanket statement.”

WWA applies a unique scientific approach that combines observational data, analysis of a range of models, peer reviewed research, and on-the-ground reports. This innovative combination, built on existing, peer reviewed methods, enables us to conduct more rapid analyses and provide faster answers to pressing questions about high-impact events – how strong the likelihood is, for example, of similar weather-related disasters in the future.

WWA considers all types of extreme weather events, including extreme heat and cold, heavy rainfall and floods, droughts, heavy snowfall, and storm surges. In cases where the probability of the event appears to have been changed due to climate change, we quantify the size of that change in order to assess the scale of the contribution from global warming. The types of events for which a quantitative analysis can be performed will expand as new attribution techniques become available and the science matures.

“The goal of this ambitious effort is to use peer reviewed science to provide decision makers, the public, and the media with early, science-based answers to the questions of whether and to what extent global warming caused by greenhouse gas emissions played a role in an event’s probability and magnitude,” said Dr. Friederike Otto, of the ECI. “Our team believes that a careful science-based assessment is extremely valuable, even in cases where we can’t provide hard numbers,“ said Dr. Maarten van Aalst, Director of the Red Cross Red Crescent Climate Centre. “It is important to recognize that “we don’t know” or “there is no significant trend” are also valid findings.” This work also helps to answer questions about trends in risk and vulnerability, and the role of human activity in extreme weather.

WWA’s mission is supported by the 2016 BAMS special issue, which concluded, “Progress in managing risks from extreme events can only be made if the foundational pillars of observations, modeling, and our understanding of the physical processes that drive extreme events and their relationship to climate change also continue to improve. Continued investments in climate science at all levels are crucial not only in the next five years, but for the foreseeable future.”

By providing a clear scientific statement, WWA injects more rigorous analysis and science-based information into coverage of — and public knowledge and discourse on — extreme weather and its relationship with climate change.

The Silencing Science Tracker is a joint initiative of the Sabin Center for Climate Change Law and the Climate Science Legal Defense Fund. It is intended to record reports of government attempts to “silence science” since the November 2016 election. At this time, the tracker only includes actions taken by the federal government, but we plan to add state-level actions in the future.

We define “silencing science” to include any action that has the effect of restricting or prohibiting scientific research, education or discussion, or the publication or use of scientific information. We divide such actions into 6 categories as follows:

Eight Die as Wildfires Rage Across California + India: More than 500 People Have Died in Monsoon Season So Far

In California, at least eight people have died as climate change-fueled wildfires rage statewide. Among the dead are two firefighters, as well as a 70-year-old woman and her 4 and 5-year-old great-grandchildren. In total, firefighters are battling seventeen wildfires blazing across California, engulfing more than 200,000 acres and forcing mass evacuations, including in Yosemite National Park. Wildfires are also surging across parts of Arizona, Colorado, Idaho and Oregon.

India: More than 500 People Have Died in Monsoon Season So Far 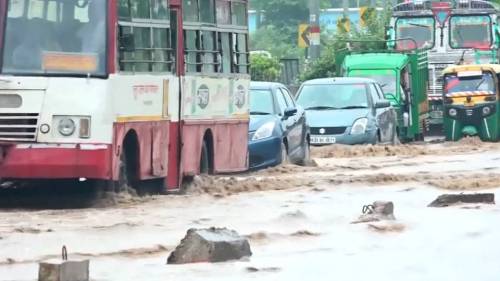 https://democracynow.org – The 2018 midterm election season has been roiled by the internal divisions between the Democratic Party’s growing progressive base and the more conservative party establishment. In New York City, this division came to a head with the most shocking upset of the election season so far, when 28-year-old Alexandria Ocasio-Cortez handily defeated 10-term incumbent Representative Joe Crowley, the fourth-ranking Democrat in the House. Ocasio-Cortez ran a progressive grassroots campaign as a Democratic Socialist advocating for “Medicare for All” and the abolition of ICE. For more on her victory and what it means for the Democratic Party, we speak with Noam Chomsky, world-renowned political dissident, linguist and author.

https://democracynow.org – The New York Times reports special counsel Robert Mueller is scrutinizing President Trump’s tweets as part of Mueller’s expanding probe into Trump’s ties to Russia. This latest revelation in the Mueller investigation is part of a nearly 24-hour stream of headlines about Trump, Russia and the administration’s various scandals. But is the mainstream media missing the real stories amid its obsession with “Russiagate”? For more, we speak with world-renowned political dissident, linguist, author and professor Noam Chomsky on media manipulation in the Trump era.

https://democracynow.org – Israel has passed a widely-condemned law that defines Israel as the nation-state of the Jewish people and gives Jews the sole right to self-determination. It also declares Hebrew the country’s only official language and encourages the building of Jewish-only settlements on occupied territory as a “national value.” The law has drawn international condemnation and accusations that Israel has legalized apartheid. For more we speak with world-renowned political dissident, author, and linguist Noam Chomsky. He is a laureate professor in the Department of Linguistics at the University of Arizona and Professor Emeritus at Massachusetts Institute of Technology, where he taught for more than 50 years.

Noam Chomsky: Survival of Organized Human Life is at Risk Due to Climate Change & Nuclear Weapons

https://democracynow.org – At least eight people have died in California as climate change-fueled wildfires rage statewide. In total, firefighters are battling seventeen wildfires blazing across California, engulfing more than 200,000 acres and forcing mass evacuations, including in Yosemite National Park. The fires comes amid a surge of deadly extreme weather worldwide, including in India, where more than 500 people have died as a result of flooding and heavy rains in recent weeks. Scientists have linked increased flooding and rainfall to climate change. For more we speak with world-renowned political dissident, author, and linguist Noam Chomsky. He is a laureate professor in the Department of Linguistics at the University of Arizona and Professor Emeritus at Massachusetts Institute of Technology, where he taught for more than 50 years.

Noam Chomsky: U.S. Must Improve Relations with Russia and Challenge the Expansion of NATO

https://democracynow.org – Russian President Vladimir Putin has invited President Trump to Moscow just days after the White House postponed a planned meeting between the two leaders in Washington until after the midterm elections. The invitation to Moscow comes after Trump and Putin met for a summit in Helsinki, Finland, earlier this month. For more about U.S.-Russian relations, we speak with world-renowned political dissident, author, and linguist Noam Chomsky. He is a laureate professor in the Department of Linguistics at the University of Arizona and Professor Emeritus at Massachusetts Institute of Technology, where he taught for more than 50 years.

A flood by heavy rainfall has led to rising rivers since mid-July in northeast China’s Heilongjiang Province. The flood has affected 176,000 hectares of cropland and 244,700 people. It has also submerged houses and caused road collapse and bridge damage.