Heatwaves strike U.K. and other countries in northern hemisphere

BBC Climate Coverage, Then and Now | Climate Denial Crock of the Week

BBC Climate Coverage, Then and Now

Leo Hickman tweets a comparison between BBC climate coverage in 2018, and 2008.

A number of Brits, including skeptics, have made the connection between this summer’s extreme heat, and the severe heatwave of 1976.

The Guardian published a comparative global temp graph, showing the marked difference, globally, between then and now.

What is going on with the weather? Subscribe to our channel here: https://goo.gl/31Q53F Here we break down the change in temperature globally over the years.

Climate Denial Crock of the Week with Peter Sinclair 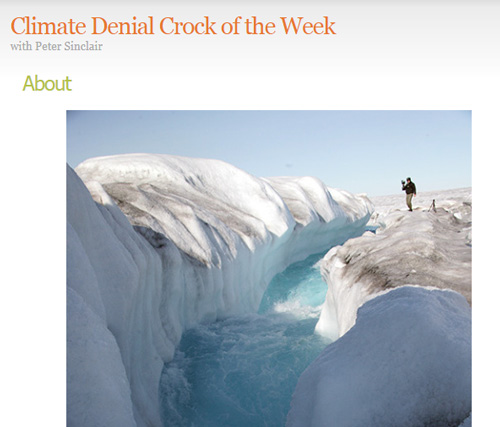 Since 2013, Mr. Sinclair has been Media Director of The Dark Snow Project, an ongoing science communication effort that focuses on clarifying and communicating the emerging story of melting ice in Greenland and its impact on global weather and sea level rise. Mr. Sinclair has traveled three times to the Greenland ice sheet with scientific teams to document ongoing research in this area, and interviewed hundreds of today’s best known glaciologists, oceanographers, geologists, and atmospheric scientists.

A frequent speaker, Mr. Sinclair has brought his rich multi-media presention to schools, colleges, universities and community groups throughout Michigan and around the world – including the University of Michigan, Michigan State University, the University of Reykjavik, and invited presentations for scientists at American Geophysical Union gatherings in San Francisco and Colorado. He has been called “The sharpest climate denial debunker on YouTube” and “The most important videographer on the planet.” A life long Michigan resident, Mr. Sinclair resides in Midland with his wife Sandra Collinson, an educator. He has two children.

DescriptionThis YouTube channel complements our website, YaleClimateConnections.org (YCC), an independent, nonpartisan, multimedia climate news and information service that provides original reporting, commentary, and analysis on climate change, one of the greatest challenges and stories of our time. Beginning in August 2014, YCC began producing 90-second radio broadcasts that aim to help citizens and institutions understand how climate change is already impacting our lives and what diverse people and organizations are doing today to reduce the risks. Visit our website to learn more. Our featured channel — 30onClimate — was launched in December 2013 as a complement to this channel. Comments Policy: Opinions expressed by subscribers and nonsubscribers to our Youtube channel do not reflect the opinions of Yale Climate Connections. Public comments are monitored by YCC, which reserves the right to remove/delete any comments that are abusive, discriminatory, vulgar, and/or threatening in nature,

James Hansen is known as the “Father of Global Warming”, chiefly because of his 1988 testimony before the U.S. Senate, in which he announced that “… the greenhouse effect has been detected, and is changing our climate now.” 30 years later, Peter Sinclair asked senior climate scientists how those predictions have held up.

What is going on with the weather? Here we break down the change in temperature globally over the years. Newsnight is the BBC’s flagship news and current affairs TV programme – with analysis, debate, exclusives, and robust interviews.