Recovery from Ocean Warming Can Take Thousands of Years

Marine ecosystems can take thousands, rather than hundreds, of years to recover from climate-related upheavals, according UC Davis researcher Sarah Moffit, who examined fossilized fauna on the seafloor to chart the changes. Read more about the research at http://news.ucdavis.edu/search/news_d….

Climate change: how hot will it get in my lifetime? – interactive | Environment | theguardian.com 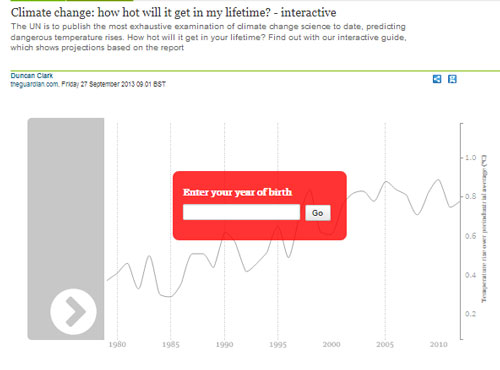 The UN is to publish the most exhaustive examination of climate change science to date, predicting dangerous temperature rises. How hot will it get in your lifetime? Find out with our interactive guide, which shows projections based on the report

Data provided by the Environmental Change Institute, School of Geography and the Environment, and Department of Physics, University of Oxford, with support from the Oxford Martin Programme on Resource Stewardship and the Union of Concerned Scientists. Modelling by Richard Millar. Interactive by Duncan Clark.

Temperature projections are based on the idealised climate model of Boucher and Reddy (2009), as used for calculation of warming potentials in IPCC (2013), driven by the IPCC “RCP8.5” high emissions scenario. They are consistent with, but not identical to, to the projections of the IPCC (2013).

• Climate change: how hot will it get in my lifetime? – interactive

World leaders must now respond to an “unequivocal” message from climate scientists and act with policies to cut greenhouse gas emissions, the United Nations secretary-general urged on Friday.

Introducing a major report from a high level UN panel of climate scientists, Ban Ki-moon said, “The heat is on. We must act.”

The world’s leading climate scientists, who have been meeting in all-night sessions this week in the Swedish capital, said there was no longer room for doubt that climate change was occurring, and the dominant cause has been human actions in pouring greenhouse gases into the atmosphere.

In their starkest warning yet, following nearly seven years of new research on the climate, the Intergovernmental Panel on Climate Change (IPCC) said it was “unequivocal” and that even if the world begins to moderate greenhouse gas emissions, warming is likely to cross the critical threshold of 2C by the end of this century. That would have serious consequences, including sea level rises, heatwaves and changes to rainfall meaning dry regions get less and already wet areas receive more.

In response to the report, the US secretary of state, John Kerry, said in a statement: “This is yet another wakeup call: those who deny the science or choose excuses over action are playing with fire.”

“Once again, the science grows clearer, the case grows more compelling, and the costs of inaction grow beyond anything that anyone with conscience or commonsense should be willing to even contemplate,” he said.

He said that livelihoods around the world would be impacted. “With those stakes, the response must be all hands on deck. It’s not about one country making a demand of another. It’s the science itself, demanding action from all of us. The United States is deeply committed to leading on climate change.” 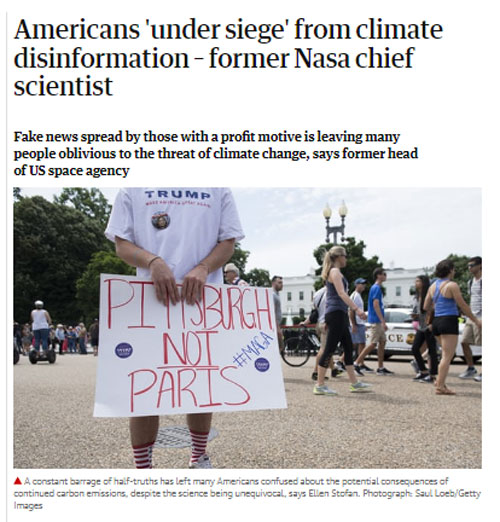 Thu 8 Jun 2017 15.15 BST
Fake news spread by those with a profit motive is leaving many people oblivious to the threat of climate change, says former head of US space agency

Americans are “under siege” from disinformation designed to confuse the public about the threat of climate change, Nasa’s former chief scientist has said.

Speaking to the Guardian, Ellen Stofan, who left the US space agency in December, said that a constant barrage of half-truths had left many Americans oblivious to the potentially dire consequences of continued carbon emissions, despite the science being unequivocal. 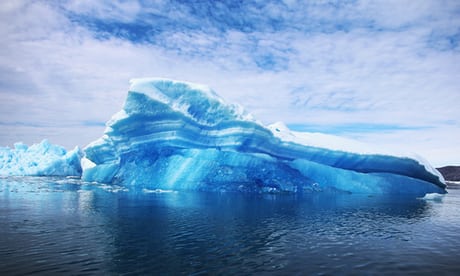 “We are under siege by fake information that’s being put forward by people who have a profit motive,” she said, citing oil and coal companies as culprits. “Fake news is so harmful because once people take on a concept it’s very hard to dislodge it.”

During the past six months, the US science community has woken up to this threat, according to Stofan, and responded by ratcheting up efforts to communicate with the public at the grassroots level as well as in the mainstream press.

“The harder part is this active disinformation campaign,” she said before her appearance at Cheltenham Science Festival this week. “I’m always wondering if these people honestly believe the nonsense they put forward. When they say ‘It could be volcanoes’ or ‘the climate always changes’… to obfuscate and to confuse people, it frankly makes me angry.”

Stofan added that while “fake news” is frequently characterised as a problem in the right-leaning media, she saw evidence of an “erosion of people’s ability to scrutinise information” across the political spectrum. “All of us have a responsibility,” she said. “There’s this attitude of ‘I read it on the internet therefore it must be true’.”

Stofan resigned from her post at the top of Nasa in December, but said she had decided to do so before the US election results. “It wasn’t anything to do with it, but I’m glad I’m not there now,” she said. 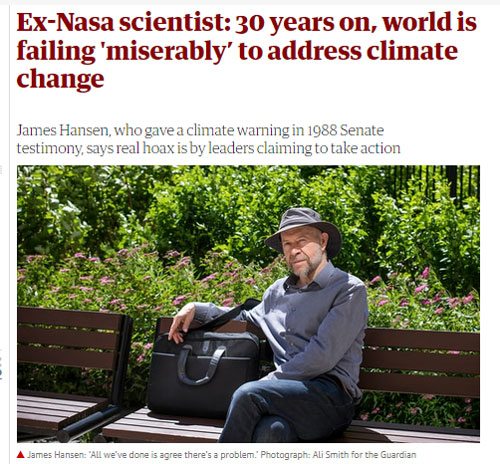 James Hansen: ‘All we’ve done is agree there’s a problem.’ Photograph: Ali Smith for the Guardian

James Hansen, who gave a climate warning in 1988 Senate testimony, says real hoax is by leaders claiming to take action

Thirty years after a former Nasa scientist sounded the alarm for the general public about climate change and human activity, the expert issued a fresh warning that the world is failing “miserably” to deal with the worsening dangers.

While Donald Trump and many conservatives like to argue that climate change is a hoax, James Hansen, the 77-year-old former Nasa climate scientist, said in an interview at his home in New York that the relevant hoax today is perpetrated by those leaders claiming to be addressing the problem. 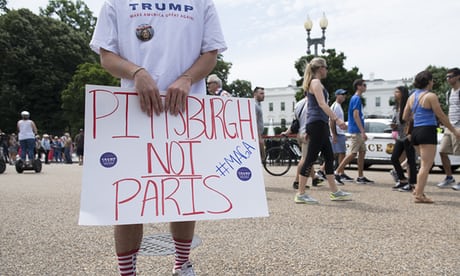 Hansen provided what’s considered the first warning to a mass audience about global warming when, in 1988, he told a US congressional hearing he could declare “with 99% confidence” that a recent sharp rise in temperatures was a result of human activity.

Since this time, the world’s greenhouse gas emissions have mushroomed despite repeated, increasingly frantic warnings about civilization-shaking catastrophe, from scientists amassing reams of evidence in Hansen’s wake.

“All we’ve done is agree there’s a problem,” Hansen told the Guardian. “We agreed that in 1992 [at the Earth summit in Rio] and re-agreed it again in Paris [at
the 2015 climate accord]. We haven’t acknowledged what is required to solve it. Promises like Paris don’t mean much, it’s wishful thinking. It’s a hoax that governments have played on us since the 1990s.”

Hansen’s long list of culprits for this inertia are both familiar – the nefarious lobbying of the fossil fuel industry – and surprising. Jerry Brown, the progressive governor of California, and the German chancellor, Angela Merkel, are “both pretending to be solving the problem” while being unambitious and shunning low-carbon nuclear power, Hansen argues.

The Arctic is warming faster than anywhere else on Earth, affecting people in the region, fish and wildlife they depend on for food, and their environment. This unprecedented change has ramifications far beyond the region for the global economy, weather, climate, sea level, trade and security. Watch the full Arctic Report 2017 AGU press conference at https://www.youtube.com/watch?v=1gTkc… Highlights https://www.climate.gov/Arctic-2017 Read the report at http://acrtic.noaa.gov/report-card

Rapid collapse of Antarctic glaciers could flood coastal cities by the end of this century. Based on an article written by Eric Holthaus. Read the full story https://grist.org/article/antarctica-…

Climate scientists rarely speak publicly about their personal views, but in the wake of some extreme weather events, the specialists who make predictions about our climate reveal they’re experiencing sometimes deep anxieties. Kerry Brewster reports.

Coping with the impacts of climate change: How Forest Genetic Resources can help

Food and Agriculture Organization of the United Nations
Published on Jun 4, 2018