What Canadians think of Americans 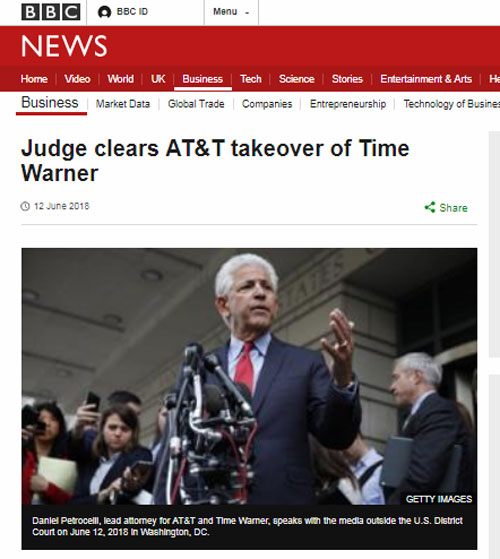 A US district court judge has cleared the merger of telecoms giant AT&T and media firm Time Warner, in a major defeat for government regulators.

The US had sued to block the deal, arguing that it would reduce competition in pay TV and lead to higher prices for consumers.

But Judge Richard Leon rejected those arguments, approving the deal without conditions.

The ruling is expected to lead to other mergers and acquisitions.

The lawsuit against AT&T had sent a signal that the Trump administration’s Department of Justice was taking a more hardline stance on such mega-deals.

Analysts say the decision will bolster firms such as Comcast – which is considering bidding for 21st Century Fox assets, including its stake in Sky, in a challenge to a deal announced between Fox and Disney last year.

Judge Leon’s decision comes more than 18 months after AT&T announced in 2016 its plans to buy Time Warner in a transaction then valued at about $85bn.

The deal is set to unite AT&T’s significant wireless, satellite television and internet business with Time Warner’s media properties, which include HBO and CNN.

Attorney Daniel Petrocelli, who represented AT&T, said the firm expects to complete the transaction before 21 June.