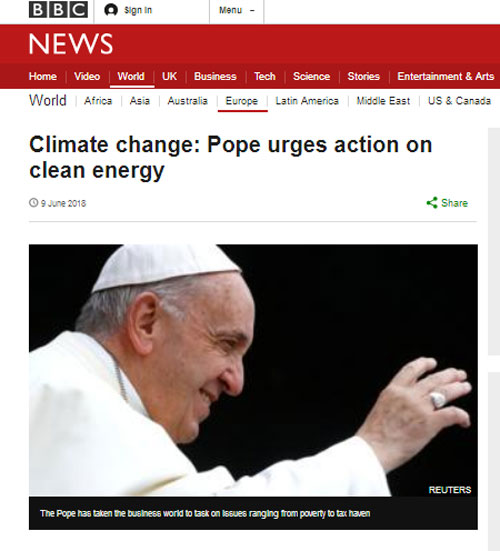 Pope Francis has said climate change is a challenge of “epochal proportions” and that the world must convert to clean fuel.

“Civilisation requires energy, but energy use must not destroy civilisation,” he said.

He was speaking to a group of oil company executives at the end of a two-day conference in the Vatican.

Modern society with its “massive movement of information, persons and things requires an immense supply of energy”, he told the gathering.

“But that energy should also be clean, by a reduction in the systematic use of fossil fuels,” he said.

“Our desire to ensure energy for all must not lead to the undesired effect of a spiral of extreme climate changes due to a catastrophic rise in global temperatures, harsher environments and increased levels of poverty.”

The world needed to come up with an energy mix that combated pollution, eliminated poverty and promoted social justice, he added.