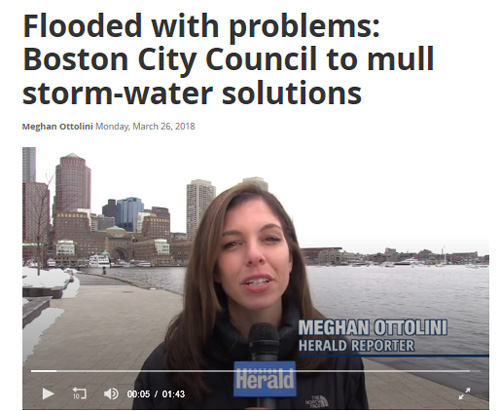 “We’ve had two ‘once in a hundred year’ storms in the past month,” said Councilor Michelle Wu, the hearing’s sponsor. “Throughout Boston this is going to an issue. There will be tremendous costs. How do we plan to pay for it? How do we plan to maintain that level of resiliency? What are the governing structures, are there laws that should be passed?”

The extreme weather generated debate over an idea for a four-mile, $20 billion harbor barrier wall with mechanical gates that would open and close, essentially building a dam against storm surges. A team of engineers, scientists, and economists at University of Massachusetts Boston, including civil engineer Paul Kirshen, expect to release their research on the proposal in May.

But aside from the astro­nomical price tag and potential regulatory nightmare that would come with the barrier, Kirshen said it’s far from an ideal solution.

“If you build these offshore barriers, you put all your eggs in one basket,” Kirshen said. “Say the gates don’t open or close. Then you’re in trouble.”

A representative of the mayor’s office is expected to attend today’s meeting. Just this month Mayor Martin J. Walsh’s administration turned its attention to South Boston, which calls for more complicated solutions than other at-risk neighborhoods.

Flooding is more manageable in East Boston and Charlestown, according to city environmental chief Austin Blackmon, because flood entryways are relatively narrow. South Boston, with its many beaches and channels, presents a bigger challenge.

“In South Boston, you’ve got more area that is vulnerable, that would really require more of a coastal solution,” Blackmon told the Herald.

Climate analyst Erika Spanger-Siegfried said in just 40 years, streets in Fort Point could flood at nor’easter levels every other week.

“It isn’t a long-term risk anymore. It really has arrived,” she said.

In East Boston, developers are changing the way they build and renovate homes to prepare for the worst. Developer Marc Savatsky’s latest construction project in Jeffries Point fell within a flood zone, forcing him to incorporate redesigns such as flood vents that would allow sea water to flow in and out of the area where a traditional home’s basement would be.

Savatsky said it’s time for the city to put its money where its mouth is on flood preparation.

“A plan is great but a budget is better, because a budget leads to action,” he said.

Blackmon said that financing future projects, especially large-scale solutions, will be a challenge. Walsh’s administration has proposed protective measures for Charlestown and East Boston that would cost $62 million and $200 million, respectively.

Blackmon said the scope of the flood issue may ­demand the creation of an entirely new government structure to address the ­issues at both a city and state level, but called the “cost of inaction” “far more expensive.”

“We have billions of dollars of assets already within the FEMA flood plain,” Blackmon said. “The option of not doing anything has already passed by.”

The Most Disturbing Climate Change-Events We’ve Seen Yet

Is a trade war with China on the horizon?

Irene Chen discusses the consequences of US tariffs on China

Boston could find itself underwater on flooding costs | Boston Herald

Cars and Plows drive through a flooded Neponset Circle during a winter Nor’easter on Thursday January 4, 2018. Heard Photo by Joseph Prezioso

The starting price tag to protect Boston from rising seas is up to $2.5 billion — even before a $20 billion seawall is calculated in, researchers told city councilors in a special hearing yesterday.

The University of Massachusetts Boston Sustainable Solutions Lab’s team insists the work has to be done to prevent more floods like those that saw debris flowing through city streets in recent storms.

“Boston is the economic engine of the state,” UMass Boston professor David Levy told the council. “You can’t get away from paying for this.”

Levy and other experts said that with $1 billion to $2.5 billion, Boston could elevate some flood-prone land and retrofit older buildings to withstand rising tides.

John D Liu has made Ecosystem Restoration his life’s work. Over the past 30 years, he has documented large scale Ecosystem Restoration projects across the world, from China, to Austrialia, to Ethiopia. John D Liu’s work is so powerful because it shows a way forward for the future through Ecosystem Restoration. His message is not just about Carbon Sequestration, or Permaculture, but holistically addressing the great problems of the future together, through regenerating our Ecosystem.
In John’s documentaries, he has proven that thousands of miles desert can be changed back into productive, green ecosystems when the political will and economic incentives are behind it. In this presentation, John will reveal his vision for his newest mission: Ecosystem Restoration Cooperatives….

About John…
John D Liu is an American who has lived in China for more than 30 years.
John has concentrated on ecological film making since the mid-1990’s, and has written, produced and directed films on Grasslands, Deserts, Wetlands, Oceans, Rivers, Urban Development, Atmosphere, Forests, Endangered Animals, and Poverty Reduction. His work has taken him to over 70 countries. Many of his films have appeared on BBC World and other networks. In 2003, Mr. Liu wrote, produced and directed “Jane Goodall – China Diary” for National Geographic.
Since 1997, John has directed the EEMP, which uses television to deliver ecological, sustainable development and public health messages in China and other countries. Mr. Liu was also the driving force in the creation and development of the China Environment and Sustainable Development Reference and Research Centre (CESDRRC), the China HIV/AIDS Information Network (CHAIN), and the Environmental Education Media Project (Mongolia). For many years Mr. Liu has studied and worked to promote the potential of ecological restoration including presenting the recent films “Hope in a Changing Climate”, “Rwanda – Forests of Hope” and “Emerging in a Changing Climate”.

In this online class, the authors of “The New Water Paradigm” will reveal a global plan for how we can restore stable climate and weather patterns by restoring water to our landscapes. The plan, called: “Rain for Climate” aims to restore climate stability by repairing watersheds and waterways on land. Join us, and learn from the top hydrologists in the world, who have spent the last decade repairing watersheds in Slovakia and gathering evidence as to what it will take to restore climate stability worldwide.

For links to related material see: