Animations shows flooding in Boston that would result from a 100-year coastal storm surge with sea level rise of 0.60 meters (approximately 2 feet). Higher relative sea level will add to the base elevation of any storm surge, giving it more power to overtop both natural and constructed protection. Find out more at http://www.net.org/warming

Sea level rise viewer (U.S. only, sorry international plan fans): https://coast.noaa.gov/slr/
Sea level rise could submerge land currently home to up to 760 million people worldwide if global temperatures rise 4 degrees celsius by the year 2100. So what are cities and city planners going to do to minimize the potential devastation? Resources on this topic: Brecht, H., Dasgupta, S., Laplante, B., Murray, S., & Wheeler, D. (2012).

US cities under 25 feet of water

Coastal cities could see a rise in sea levels by as much as 4 ft by the end of the century. To help put a visual to the number, artist Nickolay Lamm created this series of simulations of US city landmarks as affected by sea levels rising 5, 12 and 25 feet. Using Climate Central’s sea level rise maps, Lamm imagines recognizable locales such as Venice Beach CA, Miami Beach FL, and Boston Harbor with catastrophic flooding. Produced by Rob Ludacer

Boston’s receding shorelines: a glimpse into the future

What will Boston look like by the year 2100? It depends on how much CO2 is emitted into the atmosphere. Watch as sea-level rise overtakes Boston’s shorelines this century. For a neat graphic showing CO2 and temperature: http://openclimatedata.net/climate-sp…
For more information about the gravitational influence of ice sheets on the oceans: http://sealevelstudy.org/sea-change-s…
and https://www.ipcc.ch/pdf/assessment-re… (see FAQ 13.1; page 1148)
To read the Climate Ready Boston report: http://climateready.boston.gov
To see the effect of countries’ Paris agreement pledges on global temperature: http://climateactiontracker.org/
For a description of the data processing workflow used to create the flood maps: https://coast.noaa.gov/data/digitalco…
Data sources:
– NOAA Office for Coastal Management (MHHW)
– MassGIS (LiDAR Terrain Data, 2013-2014 Sandy)
– MassGIS (USGS Color Ortho Imagery, 2013/2014)
– BostonOpenData (City of Boston building dataset)
– Alder & Hostetler, 2013 (USGS National Climate Change Viewer)

Scientists warn increasingly rapid melting could trigger polar ‘tipping points’ with catastrophic consequences felt as far away as the Indian Ocean
Arctic scientists have warned that the increasingly rapid melting of the ice cap risks triggering 19 “tipping points” in the region that could have catastrophic consequences around the globe.

The Arctic Resilience Report found that the effects of Arctic warming could be felt as far away as the Indian Ocean, in a stark warning that changes in the region could cause uncontrollable climate change at a global level.

“The warning signals are getting louder,” said Marcus Carson of the Stockholm Environment Institute and one of the lead authors of the report. “[These developments] also make the potential for triggering [tipping points] and feedback loops much larger.”

Climate tipping points occur when a natural system, such as the polar ice cap, undergoes sudden or overwhelming change that has a profound effect on surrounding ecosystems, often irreversible.

In the Arctic, the tipping points identified in the new report published on Friday, include: growth in vegetation on tundra, which replaces reflective snow and ice with darker vegetation, thus absorbing more heat; higher releases of methane, a potent greenhouse gas, from the tundra as it warms; shifts in snow distribution that warm the ocean, resulting in altered climate patterns as far away as Asia, where the monsoon could be effected; and the collapse of some key Arctic fisheries, with knock-on effects on ocean ecosystems around the globe.

The research, compiled by 11 organisations including the Arctic Council and six universities, comes at a critical time, not only because of the current Arctic temperature rises but in political terms. 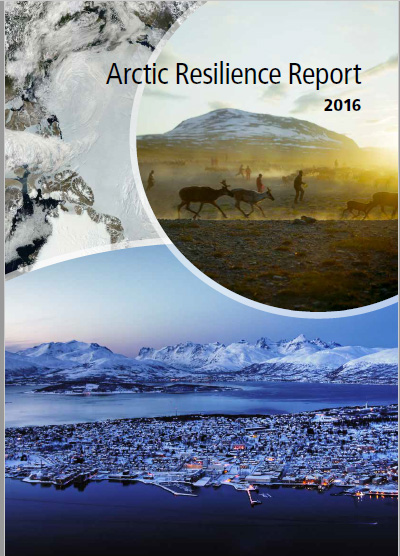 The Arctic is warming faster than anywhere else on Earth, affecting people in the region, fish and wildlife they depend on for food, and their environment. This unprecedented change has ramifications far beyond the region for the global economy, weather, climate, sea level, trade and security.
Watch the full Arctic Report 2017 AGU press conference at https://www.youtube.com/watch?v=1gTkc…
Highlights https://www.climate.gov/Arctic-2017
Read the report at http://acrtic.noaa.gov/report-card
Teaser image https://pixabay.com/en/iceberg-sea-me…

Methane is released constantly from the ocean floor on several locations in the Arctic Ocean. Visualisation by: Alexey Portnov. https://www.youtube.com/channel/UCekO…

Climate: https://youtu.be/aPPiVhecMvY Methane takes the quick way out Accounting for all the sources and sinks of methane is important for determining its concentration in the atmosphere. Andreassen et al. found evidence of large craters embedded within methane-leaking subglacial sediments in the Barents Sea, Norway. They propose that the thinning of the ice sheet at the end of recent glacial cycles decreased the pressure on pockets of hydrates buried in the seafloor, resulting in explosive blow-outs. This created the giant craters and released large quantities of methane into the water above.

Widespread methane release from thawing Arctic gas hydrates is a major concern, yet the processes, sources, and fluxes involved remain unconstrained. We present geophysical data documenting a cluster of kilometer-wide craters and mounds from the Barents Sea floor associated with large-scale methane expulsion. Combined with ice sheet/gas hydrate modeling, our results indicate that during glaciation, natural gas migrated from underlying hydrocarbon reservoirs and was sequestered extensively as subglacial gas hydrates. Upon ice sheet retreat, methane from this hydrate reservoir concentrated in massive mounds before being abruptly released to form craters. We propose that these processes were likely widespread across past glaciated petroleum provinces and that they also provide an analog for the potential future destabilization of subglacial gas hydrate reservoirs beneath contemporary ice sheets.