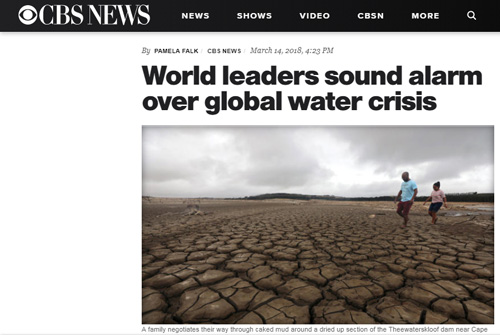 UNITED NATIONS — The World Bank and the U.N. are sounding the alarm over a global water crisis. A joint report released Wednesday says that 40 percent of the world’s population is affected by water scarcity.

The report, based on two years of research, says that 700 million people are at risk of being displaced by intense water scarcity by 2030. More than two billion people are compelled to drink unsafe water, and more than 4.5 billion people do not have safely managed sanitation services.

“The ecosystems on which life itself is based – our food security, energy sustainability, public health, jobs, cities – are all at risk because of how water is managed today,” World Bank Group President Jim Yong Kim said.

“The world can no longer afford to take water for granted,” he said.

Combined, award-winning actors Meryl Streep and Tom Hanks have appeared in more than 100 films. But “The Post” marks the first time they are on screen together. In the movie, Streep plays Katharine Graham, the publisher of the Washington Post, and Hanks portrays legendary editor Ben Bradlee. The plot centers on the paper’s famous and difficult decision to publish top secret government information from the Pentagon Papers in 1971. Streep and Hanks join “CBS This Morning” to discuss how the film resonates today.

50 Years After My Lai Massacre in Vietnam, Revisiting the Slaughter the U.S. Military Tried to Hide

https://democracynow.org – Fifty years ago, on March 16, 1968, U.S. soldiers attacked the Vietnamese village of My Lai. Even though the soldiers met no resistance, they slaughtered more than 500 Vietnamese women, children and old men over the next four hours, in what became known as the My Lai massacre. After the massacre, the U.S. military attempted to cover up what happened. But in 1969 a young reporter named Seymour Hersh would reveal a 26-year-old soldier named William Calley was being investigated for killing 109 Vietnamese civilians. Today, memorials have been held in My Lai to mark the 50th anniversary of this horrific attack.

as well as current related issues:

Steven Spielberg directs Meryl Streep and Tom Hanks in The Post, a thrilling drama about the unlikely partnership between The Washington Post’s Katharine Graham (Streep), the first female publisher of a major American newspaper, and editor Ben Bradlee (Hanks), as they race to catch up with The New York Times to expose a massive cover-up of government secrets that spanned three decades and four U.S. Presidents. The two must overcome their differences as they risk their careers – and their very freedom – to help bring long-buried truths to light.

http://democracynow.org – Fifty years after the U.S. ground invasion of Vietnam began, we look back at the 1968 My Lai massacre, when American troops killed hundreds of civilians. Journalist Seymour Hersh broke the story of the massacre and cover-up, winning a Pulitzer Prize for his work. But Hersh never actually went there — he interviewed soldiers stateside. Forty-seven years later, he recently traveled to My Lai for the first time, which he documents in a new article for The New Yorker, “The Scene of the Crime: A Reporter’s Journey to My Lai and the Secrets of the Past.” Hersh joins us to discuss how he exposed the massacre nearly five decades ago and what it was like to visit My Lai for the first time.

Thomas Stocker starts by debunking three of the most popular climate change myths. He is one of the leading researchers in the field of climate and regularly advises the UN. At the end of the talk, he shows the way out of climate change: decarbonisation. Thomas Stocker graduated from ETH Zürich in 1987 and held research positions in London, Montreal and New York. Since 1993 he is Professor of Climate and Environmental Physics at the University of Bern. This research group is leading in the reconstruction of greenhouse gas concentrations from polar ice cores and the simulation of past and future climate changes. From 2008 to 2015 he co-chaired Working Group I of the IPCC, the United Nations Intergovernmental Panel on Climate Change.

Kirk Sorensen stumbled across thorium while doing research on how to power a lunar community. Thorium is a cleaner, safer, and more abundant nuclear fuel—one that Kirk believes will revolutionize how we produce our energy. Kirk Sorensen began his work with thorium while working as an aerospace engineer at NASA. In 2010, he left NASA to work as the chief nuclear technologist at Teledyne Brown Engineering. In 2011, he founded Flibe, a company focused on developing modular thorium reactors.

China’s $1 trillion One Belt One Road (New Silk Road) initiative is unprecedented in size and scope. President Xi Jinping has sealed megaproject deals with 65 countries to construct ports, power stations, rail lines, roads, and all the tunnels and bridges needed to connect them back to mainland China.

A modern trade route between Asia and Europe is under construction. The gigantic project is the brainchild of Chinese president Xi Jinping. The New Silk Road is one of the most ambitious undertakings by far to be put forward by the Chinese president Xi Jinping. 10,000 kilometers of road, a railway line and a shipping route are to run from western China to Europe via Kazakhstan, the Urals and Moscow. Since the start of the 21st century China has become the most important export nation on the global stage. But in light of increasing tensions in the South China Sea and the threat from North Korea, it’s becoming more and more important for China to open up alternative trade routes. As a result the country has turned its gaze westward, to central Asia with its many resources and to Europe, which is still its most important trading partner.

The construction of the road with the parallel railway line has already begun in Chongqing, a megacity in the country’s interior that’s just one example of the economic boom of the past thirty years. The products made here will, it’s hoped, reach European customers effortlessly in a few years’ time. But it’s not just China’s exporters who hope to benefit from this infrastructure project. Rural regions in the west of the country should also see a boost. There’s the province of Xinjiang for example, which has seen little of the economic growth of recent years. But China’s ambitions go beyond its national borders. The planned New Silk Road runs past rich oil fields as it goes through Kazakhstan. The extraction of oil is to be ramped up, thereby securing China’s growing need for energy. By extending the route all the way to the edge of the Urals, Beijing can get all the way to Russia. But it’s not certain whether the former big brother will welcome the expansion of China’s sphere of influence all the way to central Asia and Europe. In the form of a geopolitical road movie, this documentary looks at the far-reaching shifts in the Eurasian power balance. Sooner or later the Europeans will have to take a stance on China’s new ‘soft imperialism’.