This Startup Calculates The Climate Risks For Specific Blocks And Buildings 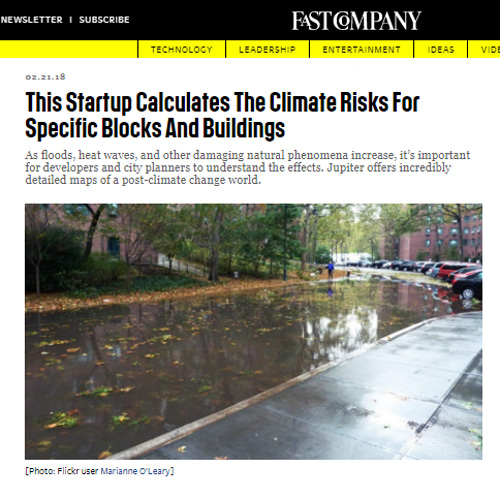 Anyone planning to build a new apartment building in Miami–or Houston, or Boston, or any other city with a growing problem with floods–faces a significant challenge. It’s hard to know if a particular site might be a safe place to build. Most FEMA flood maps are out of date; in 2012, the maps for many of the areas flooded by Sandy hadn’t been updated since 1983. The maps also don’t account for the impacts of climate change, despite the fact that the number of American coastal communities dealing with chronic flooding is expected to double in less than two decades.

A startup called Jupiter is offering developers, insurance companies, city officials, and anyone else who deals with urban planning in coastal cities a new “FloodScore” analysis that attempts to fill that gap. Using multiple models that consider everything from sea level rise and erosion to the impact of paving over wetland, data from satellites and sensors, and machine learning, the service can predict the risk of flooding on a specific block or at a specific address. It can also predict the risk of exposure to hazardous waste from nearby industry during a flood, as happened during Hurricane Harvey when containers at a chemical plant caught fire and exploded.

A Jupiter map of New York shows the potential for flooding during a storm surge. [Image: Jupiter]

“What we’re hearing from property developers is that they think this will impact their long-term insurance costs, the marketability of the property to existing and potential tenants, their capital investment in mitigation, their relationships with capital partners like sovereign wealth funds–the largest of which are increasingly focused on this issue–and a whole set of other issues,” says Jupiter CEO and co-founder Rich Sorkin.