Our oceans are rising. With human use of hydrocarbons skyrocketing, waters around the globe are getting hotter and, now, this warm sub-surface water is washing into Antarctica’s massive western glaciers causing the glaciers to retreat and break off. Antarctica holds 90% of the world’s ice and 70% of its freshwater, so if even a small fraction of the ice sheet in Antarctica melts, the resulting sea level rise will completely remap the world as we know it – and it is already happening. In the last decade, some of the most significant glaciers here have tripled their melt rate. VICE founder Shane Smith travels to the bottom of the world to investigate the instability of the West Antarctic ice sheet and to see first hand how the continent is melting — and VICE follows the rising oceans to Bangladesh for a glimpse into the world’s underwater future. From the UN Climate conference to the People’s Climate March to the forces that deny the science of global climate change, this special extended episode covers all sides of the issue and all corners of the globe, ending with a special interview with Vice President Joe Biden.

Record-Breaking Snowstorms Bury Parts of Europe, Canada and the U.S.

Record-breaking snowstorms battered parts of Europe, Canada and the United States, where at least eight people were killed amid the blizzards. Canada’s eastern province of Ontario saw the heaviest snowfall in nearly two decades. Parts of Europe experienced temperatures colder than at the North Pole, which is currently experiencing unprecedented warm temperatures. Researchers say the extreme weather is likely linked to climate change.

Trump on Xi: “He’s Now President for Life. Maybe We’ll Have to Give That a Shot Some Day”

In the United States, President Trump has praised Chinese President Xi Jinping for consolidating power and doing away with presidential term limits, saying, “He’s now president for life. … I think it’s great. Maybe we’ll have to give that a shot some day.” CNN reports Trump made the comments during a closed-door meeting with Republican donors at Trump’s private Mar-a-Lago resort in Florida.

Even by New England standards, the Nor’easter forecast to explosively develop Friday and Saturday is set to be a whopper. With onshore winds topping 70 mph, a stalling ocean storm that will linger for days, and the full moon Thursday night, the stage is set for a worst case-scenario coastal flood event.

A four foot storm surge will accompany the beast of a storm, which will rapidly spin up south of Long Island Thursday night. The central pressure could drop thirty millibars in 24 hours, easily qualifying it as a “bomb cyclone.”

[A powerful storm is gearing up to slam the Northeast, and it
could topple records]

The National Weather Service is warning that the seas could top 15.3 feet at the tidal gauge in Boston Harbor. Significant impacts will occur during the high tide Friday morning, which falls just before noon. Because the storm will stick around for several tidal cycles, it could reach this threshold again around midnight Friday and noontime Saturday.

This 15.3 feet, if realized, will break the record for flood stage in Boston for the second time this year. The long-standing record of 15.1 feet, set during the Blizzard of ’78, was knocked out of its top spot by the 15.16 feet achieved during January’s “bomb cyclone.” Both systems brought massive coastal flooding in Eastern Massachusetts, wreaking havoc in shoreline communities and destroying a number of structures.

Ecosystems across our highly developed region are threatened by climate change. Local ecosystems can help us to weather the coming climate shocks. These ecosystems are our allies, and there is much that we can do to revitalize them in our yards, streets, neighborhoods, parks, wetlands and waters. Come to this conference to be inspired and learn about current efforts and new possibilities for revitalizing ecosystems. You will leave with information on practical ways you can help right now.

Program: Keynote speaker Tom Wessels, author of The Myth of Progress, Toward a Sustainable Future, will address the critical similarities between ecosystems and human society. There will be presentations (in development) on the Ecology of Greater Boston Then and Now and a Survey of Current Ecological Conservation and Restoration Efforts. In afternoon workshops attendees will meet, connect with and learn from organizations that are practicing restoration and conservation of ecosystems in locations around the Greater Boston region: soils, trees, forests and other plants, wetlands, freshwater streams, lakes and ponds, coastal shores and salt marshes.

Where can we turn to learn? Information for Public Discussion and Citizen Action on Climate Change in Boston and Beyond | EV & N 270 | CCRV 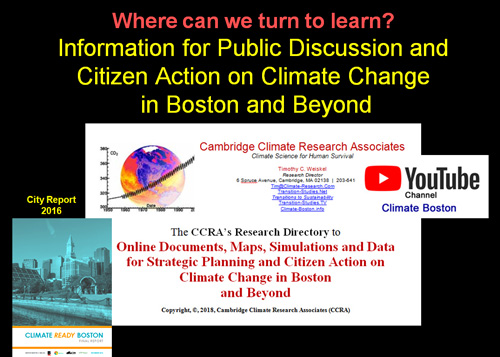 In the absence of national leadership, new forms of citizen-scientist collaboration are emerging locally and regionally to envision, coordinate and implement workable strategies for responding to climate change. Boston has experienced a series of unusual extra-tropical cyclone storms leading to a pattern of high winds, high tides and sustained storm surge along the coast.  What were once known as “once-in-a-generation” storms are now occurring with greater frequency.  Two of these “once-in-a-generation” storms occurred in just over two months in 2018 and more ‘nor-Easter’s’ of this kind are predicted in March.

How should conscious and  responsible citizens respond to these circumstances?  How should we understand these historically unprecedented and profoundly disturbing patterns of extreme weather and changes in the climate that are now anticipated by scientists for the coming decades?

Where can we turn to learn?