The Oil Industry’s Vision for the Future 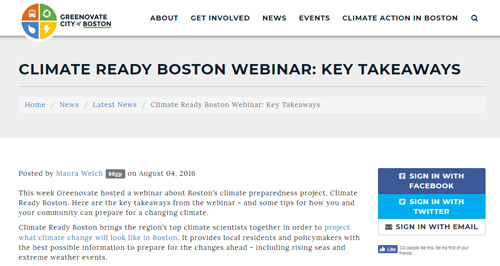 This week Greenovate hosted a webinar about Boston’s climate preparedness project, Climate Ready Boston. Here are the key takeaways from the webinar – and some tips for how you and your community can prepare for a changing climate.

Climate Ready Boston brings the region’s top climate scientists together in order to project what climate change will look like in Boston. It provides local residents and policymakers with the best possible information to prepare for the changes ahead – including rising seas and extreme weather events.

This week, more than 80 of you tuned in to learn more about Climate Ready Boston in Greenovate’s first-ever webinar. Chief of Environment, Energy, and Open Space Austin Blackmon and climate Preparedness Program Manager Mia Goldwasser explained how climate change is projected to affect our city and answered many of your questions about how the city is working to prepare for them.

We’re on a jet stream rollercoaster.

A little snow isn’t unheard of in Spring Hope, North Carolina. Autrey said that her town, located 30 miles northeast of Raleigh, can usually expect a few dustings a year. The most recent winter storm brought four inches of snow to her backyard.

But the weirdest thing about this winter this year, Autrey said, isn’t the snow. It’s the cold.

“We’re normally mild. We don’t usually get cold like we had this last time,” Autrey said. “It stayed that way for days and days.”

Persistent cold forced schools in her area to delay start times by two hours, and when Autrey’s granddaughter came over to go sledding, her hair froze.

“I said, ‘You better make sure that you thaw that. Don’t like twist it or you’re going to have a cool haircut,’” Autrey said.

The Trump administration is seeking to withdraw the United States from the international accord reached in Paris in 2015 to fight climate change. It is trying to rescind regulations on the issue. It has even scrubbed mentions of global warming from government websites. Yet its attempt to suppress the facts has not entirely succeeded, with federal agencies continuing to issue warnings, including in a major climate report published last year.

The latest climate alarm came this week in a Worldwide Threat Assessment of the U.S. Intelligence Community. Here is what the document, issued by Daniel R. Coats, the director of national intelligence, said about climate change and other environmental problems, with my annotations:

The impacts of the long-term trends toward a warming climate, more air pollution, biodiversity loss, and water scarcity are likely to fuel economic and social discontent — and possibly upheaval — through 2018.

Only six weeks into the year, this is already coming true. Cape Town, the second-largest city in South Africa, is so low on water after an extended drought that it may be forced to shut off the taps in early April. Water scarcity is a factor in the violent conflicts in Syria and Yemen, and in both countries, control of water supplies is being used as a weapon of war.

Climate change could be even worse for Boston than previously thought   -0:40

The consequences of climate change on Boston are expected to be far more calamitous than previous studies have suggested, a new report commissioned by the city says.

In the worst-case scenario, sea levels could rise more than 10 feet by the end of the century — nearly twice what was previously predicted — plunging about 30 percent of Boston under water. Temperatures in 2070 could exceed 90 degrees for 90 days a year, compared with an average of 11 days now.

And changes in precipitation could mean a 50 percent decline in annual snowfall, punctuated by more frequent heavy storms such as nor’easters. 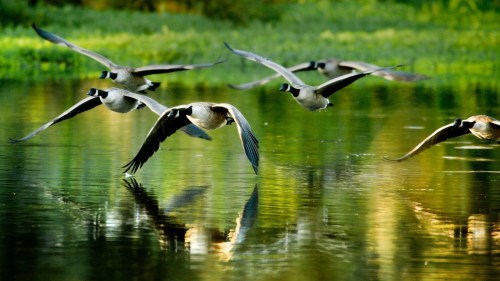 A flock of geese take flight at Lost Lake on the San Joaquin River in Fresno, Calif. on October 2, 2015. (Los Angeles Times)

On the eve of the centennial of the Migratory Bird Treaty Act, one of the nation’s bedrock environmental laws, the Trump administration delivered a churlish anniversary present: It gutted the law.

Three days before Christmas, the U.S. Interior Department quietly issued a reinterpretation of the law, effective immediately. It freed private interests — most notably, energy companies — from criminal prosecutions and fines for the deaths of migratory birds killed by industrial practices.

The opinion is such an outlier that 17 former high-ranking government conservation officials, representing both parties, sent a letter⁠ to Interior Secretary Ryan Zinke denouncing it as a “new, contrived legal standard that creates a huge loophole in the MBTA, allowing companies to engage in activities that routinely kill migratory birds.” Signers of the letter included five of the six living former U.S. Fish and Wildlife directors and seven of the eight former migratory bird management chiefs who served under Presidents Nixon through Obama.

The Migratory Bird Treaty Act has provided the foundation⁠ of federal protection for birds in the United States since it was enacted in 1918.