This video provides a quick overview of climate change in Boston with interviews from Dr. Ellen Douglas and Dr. Paul Kirshen of the University of Massachusetts – Boston.

In May 2015, Dr. Michael Ungar shared what he has learned about resilience from young people around the world, that resilience depends on more than a young person’s individual capacity to overcome challenges. Resilience is also the ability of young people’s parents, teachers, mentors and other caregivers to successfully help youth navigate and negotiate for the supports they need to thrive. Troubling behaviors can be addressed by providing young people with nine sources of resilience: structure, consequences, parent-child connections, strong relationships with peers and adults, a powerful identity, a sense of control, a sense of belonging, spirituality and life purpose, fair and just treatment, and the safety and support children need to cope when problems overwhelm them. This event was part of the Circle of Learning Parent Academy offered by SCDSB’s Parent Involvement Committee (PIC) and made possible with the support of a Ministry of Education Parents Reaching Out grant.

In Community Resilience and Education, Lesson 19 of the Think Resilience course, Richard Heinberg considers the essential ways that educators can better serve students today in order to prepare them to inherit a world of climate and economic chaos.
Watch the first six videos of the Think Resilience course for free: http://bit.ly/2sGib06
Or sign up for the course now to get immediate access to all 22 lessons: http://bit.ly/2j6IwVs 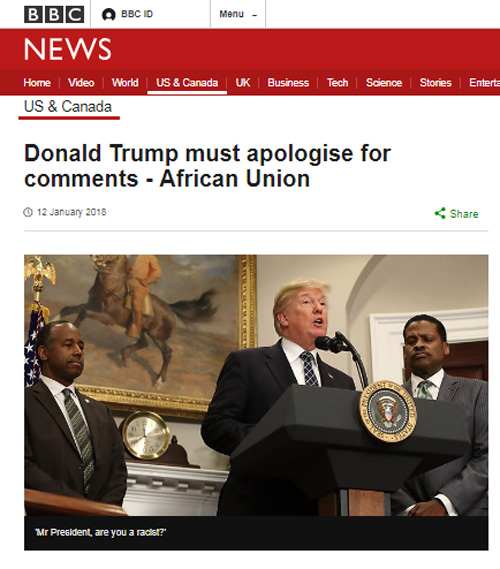 The organisation representing African countries has demanded that US President Donald Trump apologise after he reportedly called nations on the continent “shitholes”.

The group’s mission in Washington DC expressed its “shock, dismay and outrage” and said the Trump administration misunderstood Africans.

The US leader made the alleged remark in a Thursday meeting on immigration.

But Mr Trump has denied using the language reported.

He has been backed by two Republicans who were at the White House meeting, but Democratic Senator Dick Durbin said Mr Trump called African countries “shitholes” several times and used “racist” language.

On Friday, Mr Trump on Friday tweeted that his language he used at the private meeting with lawmakers to discuss immigration legislation had been “tough”.

President Donald Trump sparked international outrage Thursday over a racist comment in which he said the U.S. should limit immigration from Haiti, El Salvador and African nations in favor of countries with majority white populations. While meeting with lawmakers at the White House, Trump reportedly said, “Why do we want all these people from Africa here? They’re shithole countries … We should have more people from Norway.” Trump’s latest racist comments came just after his administration announced it is ending temporary protected status for up to 250,000 Salvadorans who have been living in the U.S. since at least 2001. Last year, the Trump administration announced it is also ending temporary protected status for tens of thousands of Haitian, Nicaraguan and Sudanese immigrants living in the United States. The comments drew swift international condemnation. This is Haitian grassroots activist René Civil, speaking from Port-au-Prince.

René Civil: “Donald Trump is more than just a cancer on the world, and not just throughout the world, but particularly for the American people. … He’s a president who’s destabilizing, a president of vulgar words, who is unacceptable.” 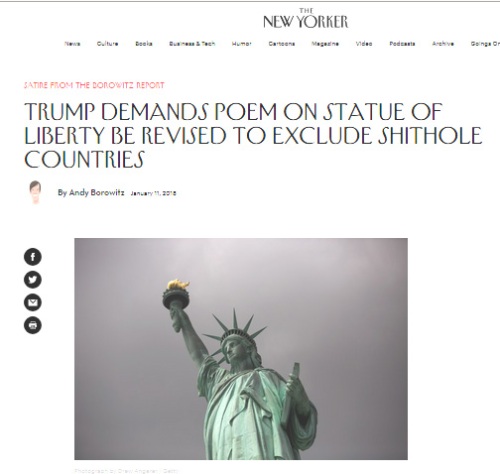 WASHINGTON (The Borowitz Report)—Donald J. Trump demanded on Thursday that the poem at the base of the Statue of Liberty be revised immediately to exclude nations he considered “shithole countries.”

Speaking to reporters, Trump said that the poem as it currently stands “is basically an open invitation that says, like, if you come from a shithole country, welcome aboard.”

“I don’t know the entire poem, but it’s something like ‘Give us your tired, your poor, your yadda yadda yadda,’ ” he said. “We could keep all that but then put in, right at the end, in big letters, maybe, ‘except if you’re from a shithole country.’ ”

“I think if a boat from a shithole country came and saw that poem with those words at the end, they would turn around and go right back to wherever they came from,” he said.

Shortly after Trump made his remarks about “shithole” countries, representatives of the countries he designated as such released a joint response.

“We do not understand President Trump’s aversion to so-called ‘shithole countries,’ since he is doing his best to turn the United States into one,” the statement read.

Andy Borowitz is the New York Times best-selling author of “The 50 Funniest American Writers,” and a comedian who has written for The New Yorker since 1998. He writes the Borowitz Report, a satirical column on the news, for newyorker.com.