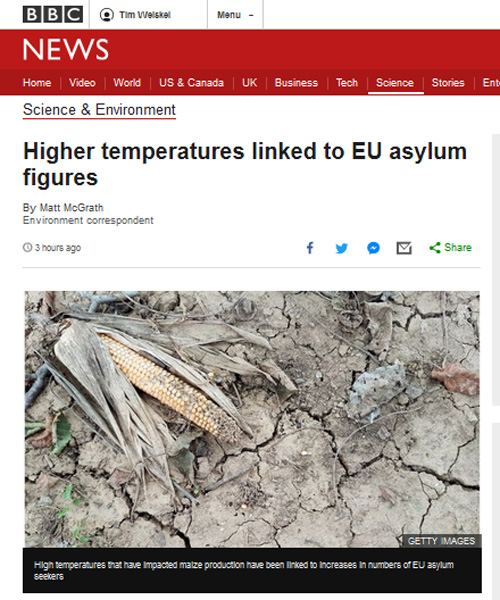 Sharp increases in the numbers of those seeking asylum in the European Union have been linked to higher temperatures in agricultural regions of the world.

Around 660,000 extra applicants would be expected each year by 2100, the authors say, if current temperature trends continue.

The study appears in Science journal.

Between 2000 and 2014, around 350,000 people applied for asylum in the European Union every year. The majority came from countries such as Afghanistan and Iraq.

In this study, researchers examine these numbers and assess the role of what they call “weather shocks” in pushing people to seek asylum. The authors find that the numbers increase if the temperatures in the 103 countries they looked at were too warm or too cold. Warmer temperatures, defined as being above 20C, were seen as having a bigger impact.

The researchers found “a highly statistically significant relationship” between the number of asylum applications logged by the EU and average temperatures in the maize growing regions in countries like Pakistan.