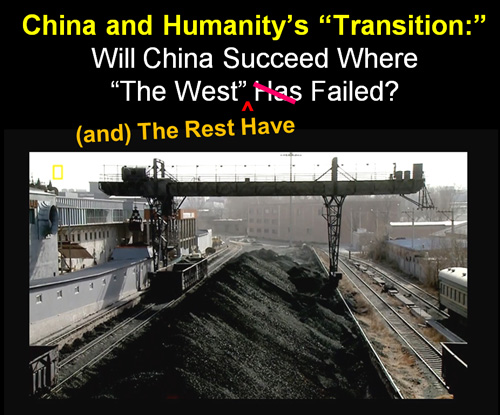 Can China — the world’s largest carbon emitter — lead the world’s economies beyond their current fossil fuel dependence?  Can China move the world away from the illusion of perpetual growth on a finite planet to the logic of global sustainability instead?

Despite increases in efficiency China’s energy growth responding its expanding demand has not led to a decline in the combustion of fossil fuels.  For this reason, while all China’s advances in energy technologies are very welcome and should be celebrated, they are not sufficient to bring down global atmospheric carbon levels to anywhere near what is necessary for a stable climate.

Scott Martelle
How’s this for a chilling effect in an era of global warming?Last month, rangers at Joshua Tree National Park posted some tweets about climate change and its impact on the desert. It was pretty basic stuff.

“Park scientists know that climate change will effect the desert ecosystem, but they don’t yet know what exactly will change,” read one. “The data they are gathering about what’s currently happening will ID areas of special interest and assist management decisions for planning & protection.”

According to a report in the Hill, the benign-sounding tweets were enough to raise the ire of Ryan Zinke, secretary of the Interior, which oversees the National Park Service. Joshua Tree Supt. David Smith was summoned to Washington for a meeting with Zinke, who reportedly told him, “no more climate tweets.”

The Trump administration’s war against truth has been of the scorched-earth variety, which should be troubling no matter one’s political beliefs. A secretive government is no friend to democracy, and ordering a park superintendent to a D.C. meeting with a Cabinet secretary to be told what not to say sends a chilling message through the Interior Department. (A department spokesman denied the Hill’s account of what was said in the meeting.)

Note that the offending tweets didn’t violate any department policy — in fact, they are still posted. But a clear message was sent to Zinke’s underlings.

This is the same Cabinet secretary who willy-nilly transferred senior staffers in June from jobs in which they had significant expertise to positions for which they were, by and large, unsuited. One transferee, Joel Clement, was reassigned from his position as director of policy analysis to a job auditing fossil fuel leases after publicly explaining how climate change is affecting Alaskan native villages (significantly, and well-documented).

The nation would be better off if Zinke wasted more of his time on such inanities instead of dismantling national monuments.

Glaciers melting from climate change threaten to reactivate Iceland’s sleeping volcanoes, according to research published in the journal Geology. Researchers found that climate change causes ice to rapidly melt in many volcanically active regions, including Iceland. And when a glacier grows or shrinks, it changes the amount of pressure on the Earth’s crust and the top part of its mantle—causing the pressure on underground chambers full of magma to shift, which in turn affects the chances of eruption. Even small changes in surface pressure can affect the likelihood of eruptions at ice-covered volcanoes.

“Climate change caused by humans is creating rapid ice melt in volcanically active regions,” said senior author Graeme Swindles, a professor of geography at the University of Leeds in the UK, in a statement summarizing the work. “In Iceland, this has put us on a path to more frequent volcanic eruptions.”

The study examined Icelandic volcanic ash preserved in peat deposits and lake sediments, and identified a period of significantly reduced volcanic activity between 5,500 and 4,500 years ago. This period came after a major decrease in global temperature, which caused glacier growth in Iceland. So, more ice means less eruptions, and vice-versa.

Admittedly, the research suggests that climate-caused eruptions lie far in the future—the time lag between glacial melting and increased volcanic activity is estimated to be on a scale of hundreds of years—but it comes at a time when Iceland’s concern about its volcanoes awakening is on the rise, and scientists have detected increased seismic activity at a couple of volcanic sites in Iceland, including Öræfajökull and Bárðarbunga.

And volcanic eruptions can inflict chaos in places far beyond their country of origin, as those affected by the 2010 eruption of the Icelandic volcano Eyjafjallajökull

can attest—its massive plumes of ash in the atmosphere over Europe shut down air travel for nearly a week, which meant that a 3-hour flight from Sweden to Switzerland instead became a 26-hour expedition by a combination of overnight buses, ferries, taxis, a series of trains, and trollies. Cab drivers asked us for more than $1,000 for a one-hour drive to transport two people. 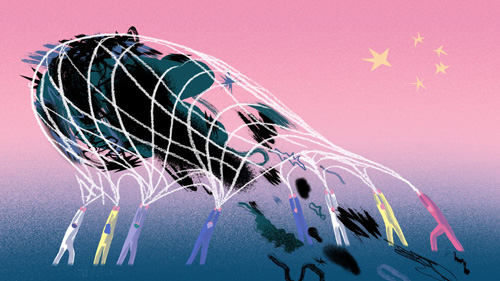 From smog-choked cities to sludge-filled rivers, stories about China’s environment in recent years have painted a bleak picture. But China is not the first country to put economic development above protecting the environment. All of today’s wealthy countries, including the UK during the industrial revolution and the US after World War II, got rich doing the same.

What’s different about China is the pace of development, the scale of its impact, and the timing. Never in human history have so many people been pulled out of poverty so quickly. China’s unprecedented development, which has relied on fossil fuels to the point that the country is now the world’s biggest emitter of greenhouse gases, comes at a crucial time for the world. If we don’t reduce greenhouse-gas emissions to zero by 2060, we’ll be staring down the gun at climate menaces humans have not faced in our time on the planet.

The good news is that, unlike the US, the world’s second-biggest emitter, China appears truly committed to climate action. The country has pledged to hit peak emissions by 2030, and to ensure emissions fall rapidly after that.

China, though, still must grapple with the reality faced by any developing economy in the 21st century. The country’s growing demand for energy is outpacing its ability to replace dirty sources like coal with clean, renewable ones. While the construction rate of new coal-fired power plants has slowed, it hasn’t stopped altogether. Further, even if China stopped building new coal plants tomorrow, the country has come to so deeply rely on this dirtiest of fossil fuels—more than 70% of its electricity currently comes from coal, compared to about 40% in the US—that it would continue to emit significant greenhouse gases for years to come. China’s energy demand is so high right now that it simply cannot afford to stop burning coal and other fossil fuels.

These contradictions make China the perfect case study for large-scale deployment of carbon capture and storage (CCS). Experts say that if there’s any country that really needs this technology, which enables power plants to burn coal or natural gas without putting carbon dioxide emissions into the atmosphere, it’s China. Better still, they insist, thanks to a heavy-handed government and large state-owned enterprises, if there’s any country that can pull it off at mass scale, it’s China.

This past July, I spent two weeks in the country to find out whether these arguments could be backed up by the reality on the ground, and to see if CCS technology had started to take hold in any meaningful way in the country.

Scientists have weighed the water that fell on Texas during the record-breaking Hurricane Harvey in August.

They calculate, by measuring how much the Earth was compressed, that the Category 4 storm dropped 127 billion tonnes, or 34 trillion US gallons.

“One person asked me how many stadia is that. It’s 26,000 New Orleans Superdomes,” said Adrian Borsa from the Scripps Institution of Oceanography.

His numbers were released as other scientists stated that this year’s big hurricanes had a clear human influence.

Harvey, Irma and Maria ripped through the US Gulf states and the Caribbean, leading to widespread flooding and wind damage.

Researchers told the annual meeting of the American Geophysical Union here in New Orleans that the heavy rainfall seen in Harvey was very likely exacerbated by the extra warming associated with increased greenhouse gases in the atmosphere.

Sea surface temperatures were particularly high in the Atlantic and the Gulf of Mexico this hurricane season. Warm ocean water acts as a fuel for the storms.

Cashing Out From the Climate Casino – Bill McKibben – – NYTimes.com

It’s hard to be optimistic about climate action, not in a week when federal scientists reported that “the Arctic shows no sign of returning” to the “reliably frozen region of recent past decades.” Not in a month when California’s wildfires show every sign of burning straight through Christmas. And not in a moment when the federal government keeps scrubbing basic climate information from its websites.

But something big is starting to shift. After years of effort from activists, there are signs that the world’s financial community is finally rousing itself in the fight against global warming. A foretaste came last month when Norway’s sovereign wealth fund — the world’s biggest — said that it is considering divestment from holdings in fossil fuel companies.

The Norwegians are far from the first to consider such a move (investors controlling more than $5 trillion in assets have committed to dropping all or some of their fossil fuels stocks) but they are the biggest. And since their fund had been built on the revenues from North Sea oil it was especially significant. It was as if they were preparing to cash in their chips from the hydrocarbon casino and heading out to look for a new game.

Then, in short order this week:

• The European insurance giant Axa announced it would divest itself of more than $825 million in investments in oil production and pipelines in the tar sands of Canada for both ethical and business reasons. The planet could see temperature increases as high as four degrees Celsius (7.2 degrees Fahrenheit), noted Thomas Buberl, the company’s chief executive, a development he called “not sustainable and therefore also not insurable.” He added, “As the father of two children, I really want to do the most I can with the company I am leading” to slow the rate of planetary destruction.