Let your Congress rep know YOU WILL NOT vote for them if they help repeal Net Neutrality at https://www.callmycongress.com/
Save the Internet before Dec 14th sign here https://www.battleforthenet.com/
If you live in the US, call your Congress Men. They represent YOU.

LastWeekTonight
Published on May 7, 2017

Equal access to online information is once again under serious threat. John Oliver encourages internet commenters to voice their displeasure to the FCC by visiting www.gofccyourself.com and clicking “express” to file your comment.

FCC Chairman Ajit Pai has lied to the public about his pro-corporate plan to ruin the internet by rolling back Title II net neutrality regulations. He received some help from Fox News when they brought him on ‘Fox & Friends’ and allowed Pai to spew lies with no follow-up questions. Fox News’ hosts also lied about the state of broadband in America, and presented viewers with misleading poll results in an effort to further their agenda. In this segment we attempt to dispel the abundance of misinformation disseminated by Pai and Fox News. 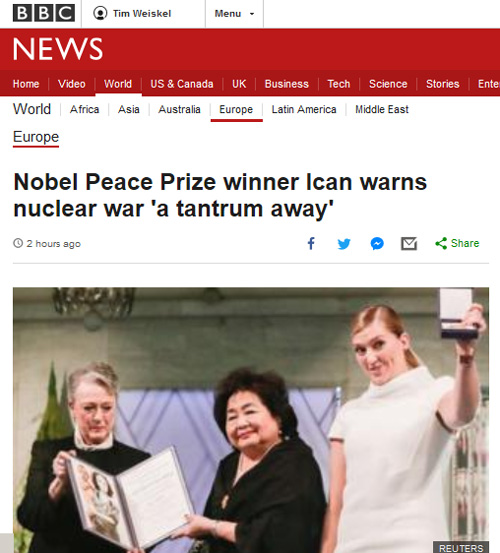 The world faces a “nuclear crisis” from a “bruised ego”, the International Campaign to Abolish Nuclear Weapons (Ican) has warned in an apparent reference to US-North Korea tensions.

Accepting the Nobel Peace Prize on Sunday, Ican’s executive director Beatrice Fihn said “the deaths of millions may be one tiny tantrum away”.

“We have a choice, the end of nuclear weapons or the end of us,” she added.

The open hostility between US President Donald Trump and the North Korean leadership under Kim Jong-un has at times descended into personal attacks this year.

Speaking at the ceremony in Oslo, Ms Fihn said “a moment of panic” could lead to the “destruction of cities and the deaths of millions of civilians” from nuclear weapons.

The risk of such weapons being used, she added, was “greater today than during the Cold War”.

Ican, a coalition of hundreds of non-governmental organisations (NGOs), has worked for a treaty to ban the weapons.

A Guide to Impeaching a President: What Are Impeachable Offences? Legal Analysis (2017)