‘This Is Not Reform. This Is Dismantlement.’ | On Point

Rex Tillerson’s changes to the State Department are hollowing out the diplomatic ranks and putting the United States in grave danger, two foreign affairs said on Tuesday’s On Point.

“This is not reform,” R. Nicholas Burns, a former high-level department official who also served as ambassador to Greece and NATO, told host Tom Ashbrook on our show Tuesday. “This is dismantlement.”

Added Nancy McEldowney, former ambassador to Bulgaria: “Our diplomats are the people who champion U.S. interests around the world, and help prevent war, or when war breaks out, bring it to a close.”

You can check out the full episode on the State Department here.

Tillerson, the former CEO of ExxonMobil, has promised to improve the way the department works and help diplomats do their jobs better.

But the reality, said Burns, is an ideological purge: starving government of resources with draconian budget cuts. Numerous ambassador and envoy positions have gone unfilled, including in key areas like the Korean peninsula, where the U.S. is facing its most critical foreign policy problems.

Meanwhile, fewer people are interested in getting involved in diplomacy at all. Tillerson’s redesign chief, Maliz Beams, quit after just three months.

Burns co-wrote an op-ed in the New York Times this week calling into question Tillerson’s decision to cull the Foreign Service ranks by as much as 8 percent.

According to the Associated Press, Tillerson said Tuesday that he was “offended” by reports that he was “hollowing out” the diplomatic corps.

closemore
Grants funded by the National Science Foundation have seen a drop in the use of the phrase “climate change” in public summaries.

Scientists appear to be self-censoring by omitting the term “climate change” in public grant summaries.

An NPR analysis of grants awarded by the National Science Foundation found a steadily decreasing number with the phrase “climate change” in the title or summary, resulting in a sharp drop in the term’s use in 2017. At the same time, the use of alternative terms such as “extreme weather” appears to be rising slightly.

FCC Moves To Kill Net Neutrality — Now What? | On Point 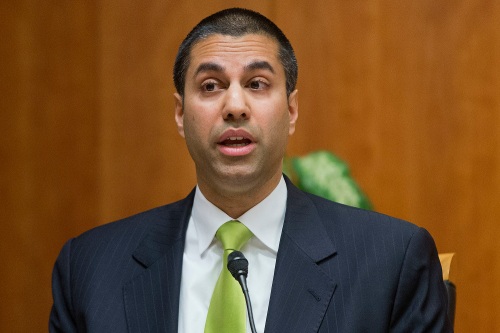 Is this the end for net neutrality? President Trump’s FCC chief moves to eliminate it. What could your Internet look like when the net isn’t neutral?

Wired: Here’s How The End Of Net Neutrality Will Change The Internet — “Internet service providers like Comcast and Verizon may soon be free to block content, slow video-streaming services from rivals, and offer “fast lanes” to preferred partners. For a glimpse of how the internet experience may change, look at what broadband providers are doing under the existing ‘net neutrality’ rules.

When AT&T customers access its DirecTV Now video-streaming service, the data doesn’t count against their plan’s data limits. Verizon, likewise, exempts its Go90 service from its customers’ data plans. T-Mobile allows multiple video and music streaming services to bypass its data limits, essentially allowing it to pick winners and losers in those categories.”

From its birth, the Internet’s been neutral. Open to all, serving all. Tap a site, start a site, and you’re in the game. Last week, Donald Trump’s FCC laid out its plan to end that. To end net neutrality. It’s on a super-fast track now. Republicans have a majority on the FCC. A final vote is slated for December 14. FCC chair Ajit Pai says no more micromanagement. Critics say it’s a gift to cable and phone companies, and you will pay. This hour, On Point: Ending net neutrality. —Tom Ashbrook

Are the Super Wealthy a Threat To Democracy Itself? (w/Guest Mark Pocan)

Are the super wealthy a threat to democracy itself? Thom is joined by Mark Pocan, and the two take your calls leading to lively discussions on progressive taxes, the transfer of wealth to the most wealthy and more. you don’t want to miss this!

Is it time to Democratize The Media to Fight Net Neutrality?

Nancy Pelosi is done with Trump, so are many others but the corporate media doesn’t seem to be behind ditching the President, and with Net Neutrality on the chopping block, is it time to democratize the media?

Trump’s HHS Nominee ‘Should be Under Criminal Investigation’

Health and Human Services nominee Alex Azar, a former president of Eli Lilly should be indicted for price gouging, not picked to oversee a department vital to the public health, says Alex Lawson of Social Security Works

How Are Cities Dealing With Water Shortages? with Brian Richter

Water shortages are occurring across 1/3 of our planet today, affecting half of the world’s population.

While ambitious schemes have been proposed to move water from wet to water-short regions, the reality is that those options would be very costly, politically difficult, and environmentally damaging. There are better options available for securing our water needs, and they center around opportunities to use less water on farms and in cities and industries. Some of the greatest potential lies in irrigated farming, where we can produce more food with much less water. If we are successful in becoming a water-saving society, we will be able to restore the health of our natural ecosystems that have been depleted of their life-giving waters, and greatly reduce the competition and conflict that arises when communities run short of water.

Few consumers are aware of the economic forces behind the production of meat, fish, eggs, and dairy. Yet omnivore and herbivore alike, the forces of meatonomics affect us in many ways. Most importantly, we’ve lost the ability to decide for ourselves what – and how much – to eat. Those decisions are made for us by animal food producers who control our buying choices with artificially-low prices, misleading messaging, and heavy control over legislation and regulation. Learn how and why they do it and how you can respond. David Robinson Simon provides us the vital insight into how the economics of animal food production influence our spending, eating, health, prosperity, and longevity.