Whilst 2017 has been a cooler year than the record-setting 2016, it is very likely to be one of the three warmest years on record, and the warmest not influenced by an El Niño event. The five-year average 2013-2017 global average temperature is currently close to 1°C above the average for 1880-1900 and is likely to be the highest five-year average on record. The world also continues to see rising sea levels, with some level of acceleration and increasing concentrations of greenhouse gases. The cryosphere continued its contraction, in particular in the Arctic where sea ice extent continued shrinking, and Antarctic sea ice extent started shrinking since last year after a multi-year period of stable or even slight expansion The overall risk of heat-related illness or death has climbed steadily since 1980, with around 30% of the world’s population now living in climatic conditions with extreme hot temperatures persisting several days a year. Between 2000 and 2016, the number of vulnerable people exposed to heatwave events has increased by approximately 125 million.

According to the international Monetary Fund (IMF), for the median low-income developing country, with annual average temperature conditions around 25°C, a 1°C increase in temperature could lower per capita economic output by about 1.2 percent.

There were many significant weather and climate events in 2017, including a very active North Atlantic hurricane season, major monsoon floods in the Indian subcontinent, and continuing severe drought in parts of east Africa.

In September 2017, the three major and devastating hurricanes that made landfall in the southern United States and in several Caribbean islands in rapid succession broke modern records for such weather extremes and for associated loss and damage.

Information used in this report is sourced from a large number of National Meteorological and Hydrological Services (NMHSs) and associated institutions, as well as the World Climate Research Programme (WCRP) and the Global Atmosphere Watch (GAW). Information has also been supplied by a number of other United Nations and other international agencies, including the Food and Agriculture Organization (FAO), the World Food Program (WFP), the World Health Organization (WHO), UNHCR, the International Organization for Migration (IOM), the International Monetary Fund (IMF), the UN International Strategy for Disaster Reduction (UNISDR) and the Intergovernmental Oceanographic Commission of UNESCO (IOC-UNESCO).

For the first time ever, the World Meteorological Organization presented its latest reports on atmospheric greenhouse gas concentrations and the state of the climate at the opening ceremony of the United Nations climate change negotiations.

“The role of the World Meteorological Organization is to provide you with the latest and best data and information on the state of the climate, and the impact of human activities,” WMO Secretary-General Petteri Taalas told delegates.

WMO Statement on State of Climate in 2017

WMO report highlights impacts on human safety, well-being and environment
6 November 2017 (WMO) – It is very likely that 2017 will be one of the three hottest years on record, with many high-impact events including catastrophic hurricanes and floods, debilitating heatwaves and drought. Long-term indicators of climate change such as increasing carbon dioxide concentrations, sea level rise and ocean acidification continue unabated. Arctic sea ice coverage remains below average and previously stable Antarctic sea ice extent was at or near a record low.

The World Meteorological Organization’s provisional Statement on the State of the Climate says the average global temperature from January to September 2017 was approximately 1.1°C above the pre-industrial era. As a result of a powerful El Niño, 2016 is likely to remain the warmest year on record, with 2017 and 2015 being second and/or third. 2013-2017 is set to be the warmest five-year period on record.

The WMO statement – which covers January to September – was released on the opening day of the United Nations climate change conference in Bonn. It includes information submitted by a wide range of UN agencies on human, socio-economic and environmental impacts as part of a drive to provide a more comprehensive, UN-wide policy brief for decision makers on the interplay between weather, climate and water and the UN global goals. 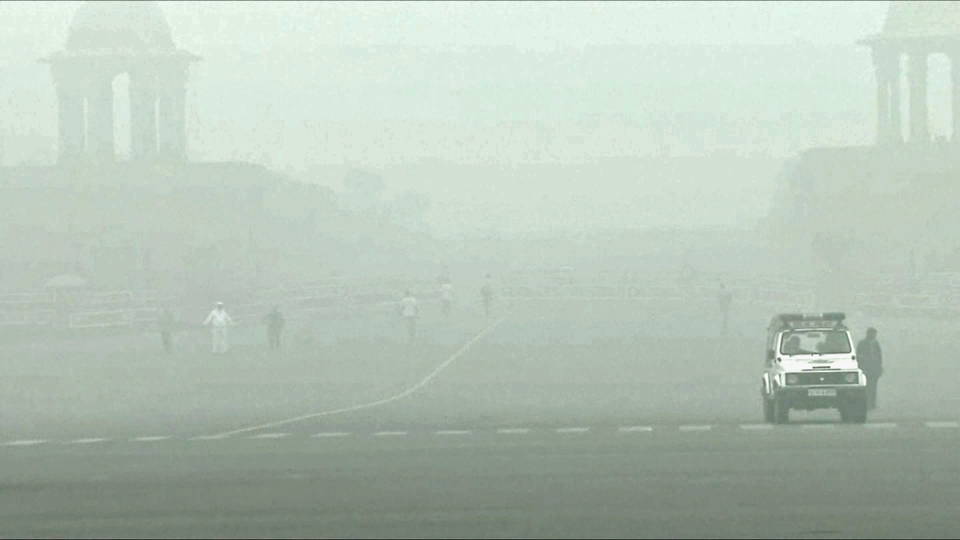 In India, a thick blanket of toxic air pollution has covered the city of New Delhi, prompting a public health emergency. In some parts of the city, air quality readings reached the maximum score that instruments can measure—999—with a score above 100 considered unsafe by India’s government. The pollution is so bad, Delhi’s chief minister called the city a “gas chamber.” A recent study by the medical journal Lancet found air pollution kills a half a million Indians prematurely each year.

In Bonn, Germany, delegates to United Nations climate talks from nearly 200 nations have adopted a final agenda for the COP 23 convention, as they work to keep global temperature rise to less than 2 degrees Celsius. On Tuesday, climate activists staged a demonstration inside the convention space, saying governments aren’t doing enough. This is Dipti Bhatnagar of Friends of the Earth International.

Dipti Bhatnagar: “We’re seeing the poorest and the most vulnerable communities already facing horrific climate impacts. We need the developed countries to drastically reduce their emissions now. We need them to provide finance and means of implementation for us developing countries to be able to make the very much needed energy transformation.”

On Tuesday, Syria’s government said it would sign the Paris Agreement on climate change. The move by President Bashar al-Assad’s government further isolates President Donald Trump, as he seeks to pull out of the deal. A withdrawal would make the U.S. the only nation on Earth that’s not a part of the landmark 2015 agreement.

Carbon Dioxide at Record Level Ahead of U.N. Climate Talks in Bonn

The United Nations warned Monday that carbon dioxide in the Earth’s atmosphere soared to a record 403.3 parts per mission last year, jumping at the fastest annual rate ever recorded. It’s a level the planet hasn’t seen since the Pliocene epoch 3 million years ago, when sea levels were about 66 feet higher. The report by the World Meteorological Organization came as representatives from nearly 200 countries are set to meet in Bonn, Germany, next week for two weeks of talks aimed at curbing the worst effects of climate change. Democracy Now! will broadcast daily from the talks in Bonn throughout the week beginning November 13.

Bill McKibben on Future of the Paris Climate Accord & U.S. Role at COP 23 Climate Talks in Germany

https://democracynow.org – As Democracy Now! heads to the U.N. Climate Change Conference in Bonn, Germany, we speak with 350.org’s Bill McKibben. Several U.S. delegations are scheduled to attend despite the fact that President Donald Trump says he is pulling the U.S. out of the landmark 2015 Paris climate accord. The Trump administration is sending officials to push coal, gas and nuclear power during a presentation at the U.N. climate summit. Meanwhile, a coalition of U.S. cities, companies, universities and faith groups have opened a 2,500-square-meter pavilion outside the U.N. climate conference called “We are Still In”—an effort to persuade other countries that wide swaths of the United States are still committed to the landmark 2015 Paris climate accord. McKibben also discusses his newly published first novel, “Radio Free Vermont: A Fable of Resistance.”

Paul Jay On The Trump Administration: One of the Most Dangerous Times in Human History

Mathew Fox and Paul Jay discuss Bannon’s alliance with the far-right Catholic Opus Dei, and his vision of the Judeo-Christian West

https://democracynow.org – A major new investigation by The Guardian based on the Paradise Papers shows how billionaire Robert Mercer and his family built a $60 million war chest for conservative causes inside their family foundation by using an offshore investment vehicle to avoid U.S. taxes. The report traces the money directly to future White House chief strategist Steve Bannon of the far-right news outlet Breitbart Media. We speak with Jon Swaine, senior reporter for The Guardian.

In Bonn, Germany, a coalition of U.S. cities, companies, universities and faith groups have opened a 2,500-square-meter pavilion outside the U.N. climate conference called “We are Still In”—an effort to persuade other countries that wide swaths of the United States are still committed to the landmark 2015 Paris climate accord. This is Alden Meyer of the Union of Concerned Scientists.

Alden Meyer: “We are Still In is a coalition of mayors, governors, business leaders, university presidents, NGOs and others that are committed to meeting America’s obligations under the Paris Agreement. … Well, actually, the public opinion polls show that an overwhelming majority of Americans support Paris. They want the U.S. to provide leadership. They don’t support what President Trump did. Even a majority of Trump’s own voters support more clean energy, solar energy, clean cars. They like the solutions to climate change. And, of course, in the wake of the recent extreme weather events—Hurricane Irma, Hurricane Jose, Hurricane Maria—there’s increasing recognition that the costs of not doing something on climate change could be quite astronomical.”

This comes as officials in Puerto Rico have acknowledged that nearly 500 more people died this September compared to September of last year. The data further casts doubt on the authorities’ claims that Hurricane Maria killed only 55 people. Meanwhile, Puerto Rico’s capital, San Juan, and other northern cities were plunged back into darkness on Thursday after a main power line failed. The power line that failed was originally repaired by the tiny Montana-based company Whitefish Energy, whose $300 million contract was canceled amid controversy over Whitefish’s ties to Interior Secretary Ryan Zinke.