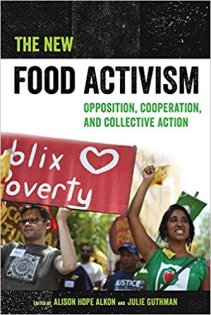 The New Food Activism explores how food activism can be pushed toward deeper and more complex engagement with social, racial, and economic justice and toward advocating for broader and more transformational shifts in the food system.

Topics examined include struggles against pesticides and GMOs, efforts to improve workers’ pay and conditions throughout the food system, and ways to push food activism beyond its typical reliance on individualism, consumerism, and private property. The authors challenge and advance existing discourse on consumer trends, food movements, and the intersection of food with racial and economic inequalities. 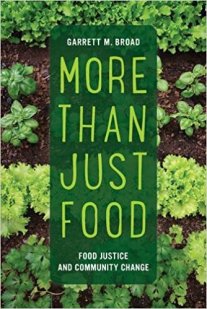 The industrial food system has created a crisis in the United States that is characterized by abundant food for privileged citizens and “food deserts” for the historically marginalized. In response, food justice activists based in low-income communities of color have developed community-based solutions, arguing that activities like urban agriculture, nutrition education, and food-related social enterprises can drive systemic social change.

Focusing on the work of several food justice groups—including Community Services Unlimited, a South Los Angeles organization founded as the nonprofit arm of the Southern California Black Panther Party—More Than Just Food explores the possibilities and limitations of the community-based approach, offering a networked examination of the food justice movement in the age of the nonprofit industrial complex.

Stuffed and Starved: The Hidden Battle for the World Food System – Revised and Updated: Raj Patel 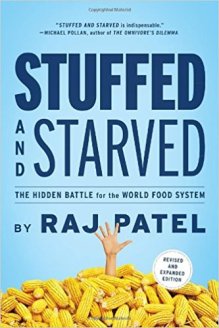 “For anyone attempting to make sense of the world food crisis, or understand the links between U.S. farm policy and the ability of the world’s poor to feed themselves, Stuffed and Starved is indispensable.”
—Michael Pollan, author of The Omnivore’s Dilemma

It’s a perverse fact of modern life: There are more starving people in the world than ever before, while there are also more people who are overweight.

To find out how we got to this point and what we can do about it, Raj Patel launched a comprehensive investigation into the global food network. It took him from the colossal supermarkets of California to India’s wrecked paddy-fields and Africa’s bankrupt coffee farms, while along the way he ate genetically engineered soy beans and dodged flying objects in the protestor-packed streets of South Korea.

What he found was shocking, from the false choices given us by supermarkets to a global epidemic of farmer suicides, and real reasons for famine in Asia and Africa.

Yet he also found great cause for hope—in international resistance movements working to create a more democratic, sustainable and joyful food system. Going beyond ethical consumerism, Patel explains, from seed to store to plate, the steps to regain control of the global food economy, stop the exploitation of both farmers and consumers, and rebalance global sustenance.

A History of the World in Seven Cheap Things: A Guide to Capitalism, Nature, and the Future of the Planet: Raj Patel, Jason W. Moore 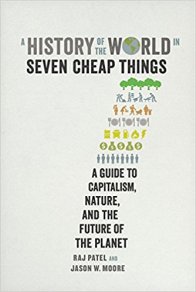 Nature, money, work, care, food, energy, and lives: these are the seven things that have made our world and will shape its future. In making these things cheap, modern commerce has transformed, governed, and devastated Earth. In A History of the World in Seven Cheap Things, Raj Patel and Jason W. Moore present a new approach to analyzing today’s planetary emergencies.

Bringing the latest ecological research together with histories of colonialism, indigenous struggles, slave revolts, and other rebellions and uprisings, Patel and Moore demonstrate that throughout history, crises have always prompted fresh strategies to make the world cheap and safe for capitalism. At a time of crisis in all seven cheap things, innovative and systemic thinking is urgently required. This book proposes a radical new way of understanding—and reclaiming—the planet in the turbulent twenty-first century. 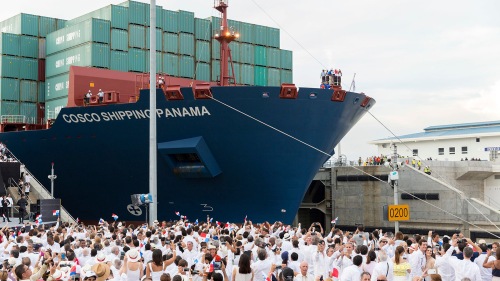 The shipping industry needs to deliver cleaner cargo ships, or we’re all sunk.

The platform overlooking the Panama Canal’s Pacific exit is buzzing with energy on a muggy October afternoon. Tourists cram together, jostling for the best views of the blue container ship gliding by in the gray-green water below. The ship’s crewmembers wave from aboard the 690-foot-long vessel, smiling as they end their eight-hour, 48-mile journey.

An employee brandishing a wireless microphone — the canal’s hype man — leads the crowd in a series of cheers, his voice as bombastic as a sports announcer’s. “Let’s give them a round of applause!” he booms in Spanish and then English. The visitors heartily oblige, clapping for the sailors aboard the Greek ship named Em Corfu.

Next in line is a colossal Japanese carrier that just unloaded cars on the Eastern Seaboard of the United States. Its blue metal sides block out the sky. Behind that comes a red tanker hauling liquefied natural gas produced in the United States to terminals in Mexico.

Featuring experts and case studies from across the globe – the USA, Canada, South Africa, Germany, Belgium, France, Norway, UK, Denmark, Greenland, China, India, Bhutan – see how our dependency on cheap energy is jeopardising our survival, and how we need to increase resource efficiency and the re-use and recycling of critical materials.

Prof. Jacquie McGlade is the Executive Director of The European Environmental Agency in Copenhagen, where since her appointment in 2003 she has introduced fundamental shifts in the thinking behind environmental reporting and the involvement of citizens. Previously a leading marine biologist and environmental informatics professor, her research focused on the dynamics of climate change, resource management and future scenarios. She is a firm advocate of informing and involving the public in all aspects of the environment: her talk will be about the importance of working together to produce environmental information to create a happier and more sustainable future.

In this talk she considers the importance of working together to create a dialogue about economic and ecological debt leading to environmental information that can create a happier and more sustainable future.

The Link Between Saudi Prince’s Power Grab and DC Corruption

How can China, US achieve a peaceful and prosperous future? 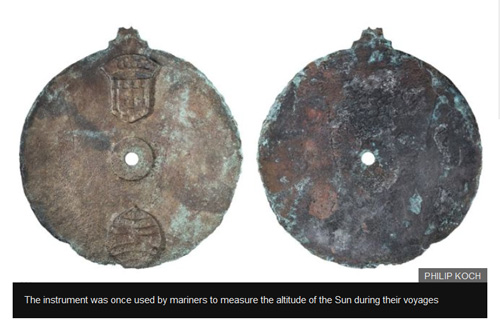 An artefact excavated from a shipwreck off the coast of Oman has been found to be the oldest known example of a type of navigational tool.

Marine archaeologists say the object is an astrolabe, an instrument once used by mariners to measure the altitude of the Sun during their voyages.

The item was recovered from a Portuguese explorer which sank during a storm in the Indian Ocean in 1503.

The boat was called the Esmeralda and was part of a fleet led by Portuguese explorer Vasco da Gama, the first person to sail directly from Europe to India.

David Mearns, from Blue Water Recovery, who led the excavation and is the author of The Shipwreck Hunter, told the BBC: “It’s a great privilege to find something so rare, something so historically important, something that will be studied by the archaeological community and fills in a gap.”

The astrolabe was discovered by Mr Mearns in 2014, and was one of nearly 3,000 artefacts recovered during a series of dives.

The bronze disc measures 17.5cm in diameter and is less than 2mm thick.

“It was like nothing else we had seen and I immediately knew it was something very important because you could see it had these two emblems on it,” said Mr Mearns.