Trump’s Make-Believe World: Pretending that the EPA is the problem will not make climate change go away… | EV & N – 258 – CCTV 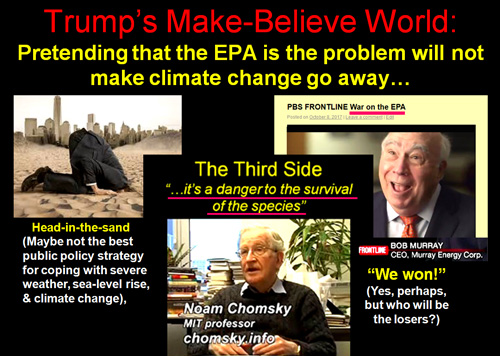 The EPA was designed to protect American health and welfare. Attacking it does avoid the crisis of climate change.  On the contrary this attack puts Americans and the entire human species at grave risk of extinction from the climate change that will be inevitable from the accelerated rate of carbon emissions from fossil fuels.

A fascinating description of how utilizing the biochar embedded in terra preta, the recently rediscovered sacred soil of the pre-Columbian peoples of the Amazon rainforest, can cut our dependency on petrochemicals, restore the health of our soils, remove carbon from our overheating atmosphere, and restore the planet to pre-industrial levels of atmospheric carbon by 2050.

The authors show that the rediscovery of terra preta is an opportunity to move beyond the West’s tradition of plunder and genocide of the native civilizations of the Americas by offering an invitation to embrace the deeper mystery of the indigenous methods of inquiry and to participate in an animate cosmos that gave rise to such a powerful soil technology. Sacred Soil, in recognizing the need for biocultural regeneration, takes a multi-disciplinary approach to the phenomenon of biochar soils, utilizing mythopoeic, historical, anthropological, and scientific perspectives to embrace the deep past, the vexed present, and the prospectus for our future.

Coming at this crucial juncture in human history, the potential resting in biochar is also an open doorway into the indigenous ways of knowing that enabled the pre-Columbian Amazonian high civilizations to support a population of millions while leaving their lands more fertile than when they arose.

On March 8, 1421, the largest fleet the world had ever seen set sail from China to “proceed all the way to the ends of the earth to collect tribute from the barbarians beyond the seas.” When the fleet returned home in October 1423, the emperor had fallen, leaving China in political and economic chaos.

The great ships were left to rot at their moorings and the records of their journeys were destroyed. Lost in the long, self-imposed isolation that followed was the knowledge that Chinese ships had reached America seventy years before Columbus and had circumnavigated the globe a century before Magellan. And they colonised America before the Europeans, transplanting the principal economic crops that have since fed and clothed the world.

The book is written informally, as a series of vignettes of Menzies’ travels around the globe examining what he claims is evidence for his “1421 hypothesis”, interspersed with speculation and description of the achievements of Admiral Zheng He’s fleet. Menzies states in the introduction that the book is an attempt to answer the question:

In the book, Menzies concludes that only China had the time, money, manpower and leadership to send such expeditions and then sets out to prove that the Chinese visited lands unknown in either China or Europe. He claims that from 1421 to 1423, during the Ming dynasty of China under the Yongle Emperor, the fleets of Admiral Zheng He, commanded by the captains Zhou Wen, Zhou Man, Yang Qing, and Hong Bao, discovered Australia, New Zealand, the Americas, Antarctica, and the Northeast Passage; circumnavigated Greenland, tried to reach the North and South Poles, and circumnavigated the world before Ferdinand Magellan. The book has been published in many languages and countries around the world and was listed as a New York Times best seller for several weeks in 2003. Although the book contains numerous footnotes, references and acknowledgments, critics point out that it lacks supporting references for Chinese voyages beyond East Africa, the location acknowledged by professional historians as the limit of the fleet’s travels. Menzies bases his main theory on original interpretations and extrapolations of academic studies of minority population DNA, archaeological finds and ancient maps.

Menzies claims that knowledge of Zheng He’s discoveries was subsequently lost because the mandarin bureaucrats of the Ming imperial court feared that the costs of further voyages would ruin the Chinese economy. He conjectures that when the Yongle Emperor died in 1424 and the new Hongxi Emperor forbade further expeditions, the mandarins hid or destroyed the records of previous exploration to discourage further voyages. Tan Ta Sen, president of the International Zheng He Society, has acknowledged the book’s popular appeal as well as its scholarly failings:

The book is very interesting, but you still need more evidence. We don’t regard it as an historical book, but as a narrative one. I want to see more proof. But at least Menzies has started something, and people could find more evidence.

Within the academic world, the book (and Menzies’ “1421 hypothesis”) is dismissed by sinologists and professional historians. In 2004, historian Robert Finlay severely criticized Menzies in the Journal of World History for his “reckless manner of dealing with evidence” that led him to propose hypotheses “without a shred of proof”.[6] Finlay wrote:

Unfortunately, this reckless manner of dealing with evidence is typical of 1421, vitiating all its extraordinary claims: the voyages it describes never took place, Chinese information never reached Prince Henry and Columbus, and there is no evidence of the Ming fleets in newly discovered lands. The fundamental assumption of the book—that the Yongle Emperor dispatched the Ming fleets because he had a “grand plan”, a vision of charting the world and creating a maritime empire spanning the oceans—is simply asserted by Menzies without a shred of proof … The reasoning of 1421 is inexorably circular, its evidence spurious, its research derisory, its borrowings unacknowledged, its citations slipshod, and its assertions preposterous … Examination of the book’s central claims reveals they are uniformly without substance.[33]

A group of scholars and navigators—Su Ming Yang of the United States, Jin Guo-Ping and Malhão Pereira of Portugal, Philip Rivers of Malaysia, Geoff Wade of Singapore—questioned Menzies’ methods and findings in a joint message:[28]

His book 1421: The Year China Discovered the World, is a work of sheer fiction presented as revisionist history. Not a single document or artifact has been found to support his new claims on the supposed Ming naval expeditions beyond Africa…Menzies’ numerous claims and the hundreds of pieces of “evidence” he has assembled have been thoroughly and entirely discredited by historians, maritime experts and oceanographers from China, the U.S., Europe and elsewhere.

This program, “April Fool’s Day: The Tragic Myopia of the ‘Best and Brightest’ – Growthism  Overshoot and Collapse,’” was recorded on 1 April 2012. It is is episode #89 of an ongoing series of educational videos from the Citizen-Science Online Learning Initiative (CSOLI). These educational videos focus on global climate change and its implications for the transitions we must make in our institutions and behavior in order to survive the coming decades. See: http://wp.me/P2iDSG-2

For a short sequence of videos on the topic see: “Why Transition Studies?”

For other programs in the “Conversations…” series see
http://transition-studies.tv