The New York Times reported that on November 29, 1962, a benefit concert called “The American Pageant of the Arts” was to be held with “a cast of 100, including President and Mrs. Kennedy, Dwight D. Eisenhower, Leonard Bernstein (as master of ceremonies),

First, it included Yo-Yo’s name in the same sentence as those of two U.S. presidents and eight world-famous performers and writers. Second, Yo-Yo had been identified in a major newspaper for the first time. It would hardly be the last. In the years since then, the New York Times alone has written about him more than 1,000 times.”

This clip is absolutely sensational: as education, composition and in performance. Glenn Gould was 28 years old here. For the impatient, Gould’s performance begins at 5:08, but I strongly encourage you to watch Leonard Bernstein’s fascinating introduction. This film originally aired in 1960 on CBS Television as part of its “Ford Presents” series. The entire film in high quality (of which this clip is a small part) was painstakingly hunted down by YouTuber erp65 and his friends. It can be found here, and I urge you, I really DO urge you, to see it in its entirety: https://youtu.be/9Nx09pigZRI I have sought erp65’s permission to cross-post, as a courtesy, but I have not yet heard back. Meanwhile, my abject enthusiasm got the better of me. This film has to be promulgated far and wide. This was erp65’s entire intention here, and we owe him and his friends enormous thanks. New York Philharmonic Orchestra Conductor: Leonard Bernstein Piano: Glenn Gould

Chubb Fellowship Lecture : “Simply Too Hot: the Desperate Science and Politics of Climate” 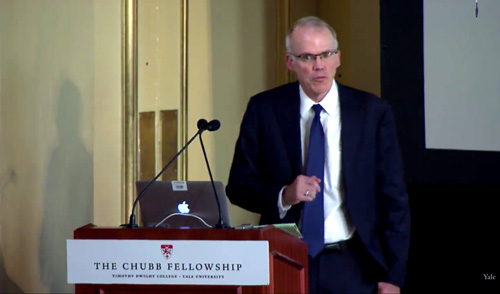 This Chubb Fellowship Lecture will feature Bill McKibben, an author and environmentalist who in 2014 was awarded the Right Livelihood Prize, sometimes called the “alternative Nobel.” He is a founder of 350.org. More about Bill McKibben and the Chubb Fellowship at: http://chubbfellowship.org

Although the activities of the program focus on the students of Timothy Dwight College, its principal beneficiary, the impact is felt throughout the student body of Yale University and in the community at large. The response of Yale students to the program continues to be enthusiastic, as it provides a unique opportunity to interact in a relaxed setting, to discuss both national and international issues and the challenges and pleasures of public life. This personal contact is what differentiates the Chubb Fellowship visit from other university lectureship invitations. It makes for a rewarding experience for all those in the Yale community who have contact with the Chubb Fellow.