Detroit’s unaffordable water hints at a U.S. crisis to come

Hurricane Harvey has produced 9 trillion gallons of rain since it made landfall on the Texas Gulf Coast on Friday night, and meteorologists forecast an additional 5 to 10 trillion gallons before the storm system subsides.

Numbers that big can be hard to grasp. Fortunately, Matthew Cappucci at the Washington Post featured a graphic in a recent article that puts the volume of rain in terrifying perspective.

By the Post’s calculations, if all the water were collected as of noon on August 27, the resulting cube would measure eight cubic miles in volume. In other words, it would be two miles tall with a base of four sides that are also two miles long.

Here’s what it would look like in the middle of Houston.

All the rain that Hurricane Harvey dumped on Texas and Louisiana, in one massive water drop – Vox 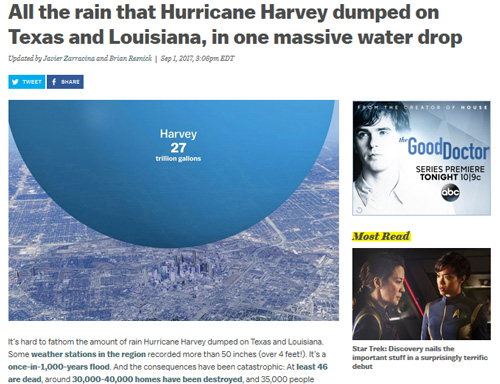 It’s hard to fathom the amount of rain Hurricane Harvey dumped on Texas and Louisiana. Some weather stations in the region recorded more than 50 inches (over 4 feet!). It’s a once-in-1,000-years flood. And the consequences have been catastrophic: At least 46 are dead, around 30,000-40,000 homes have been destroyed, and 35,000 people relocated to emergency shelters. The recovery is expected to cost well more than $150 billion, and it will take years to complete.

Joel Salatin is an American farmer, lecturer, and author whose books include You Can Farm and Salad Bar Beef. Salatin raises livestock using holistic methods of animal husbandry, free of potentially harmful chemicals, on his Polyface Farm in Swoope, Virginia. Salatins 550-acre farm is featured prominently in Michael Pollans book, The Omnivores Dilemma and the documentary film, Food, Inc. About TEDx, x=independently organize event In the spirit of ideas worth spreading, TEDx is a program of local, self- organized events that bring people together to share a TED-like experience. At a TEDx event, TEDTalks video and live speakers combine to spark deep discussion and connection in a small group. These local, self-organized events are branded TEDx, where x=independently organized TED event. The TED Conference provides general guidance for the TEDx program, but individual TEDx events are self-organized.* (*Subject to certain rules and regulations)

Joel Salatin, an organic farmer located in the Shanendoah Valley in Virginia, loves his grass – and so do his cows. In this talk Salatin outlines the role that this often unsung hero of the plant world plays in sustainable farming, and the effects that its efficient utilization can have on the world around us. Joel Salatin is a third generation beyond organic farmer and author whose family owns and operates Polyface Farm in Virginia’s Shenandoah Valley. The farm produces salad bar beef, pigaerator pork, pastured poultry, forage-based rabbits and direct markets everything to 5,000 families, 50 restaurants, and 10 retail outlets. A prolific author, Salatin’s nine books to date include both how-to and big picture themes. The farm features prominently in Michael Pollan’s NYT bestseller Omnivore’s Dilemma and the award-winning documentary, Food Inc. This talk was given at a TEDx event using the TED conference format but independently organized by a local community. Learn more at http://ted.com/tedx

This is the first comprehensive study of timber supply and demand in the Near East and the world of ancient Greece and Rome. Drawing from a wide range of literary, epigraphic, and archaeological sources, Meiggs traces changing patterns in their historical setting, and examines the timber requirements of fleets and armies, building, agriculture, and sculpture and furniture.

He also draws a tentative outline of the structure of the timber trade, with special emphasis on transport, and determines that the part played by Greece and Rome in deforestation has been greatly exaggerated.

I first noticed this book on my university library bookshelf as an undergraduate over two decades ago. As a student of the ancient world, I had always been interested in the natural distribution of trees and forests in the ancient Mediterranean world and in the use of these trees by the ancients, and Russell Meiggs’s book offered an in-depth study of this rather obscure subject. Having recently made time finally to read “Trees and Timber in the Ancient Mediterranean World,” I can offer only the highest praise of Meiggs’s book.

As a fellow of Balliol College, Oxford, and University Lecturer in Ancient History, Meiggs is exceptionally well-versed in the Greek and Latin (as well as translated Hebrew, Assyrian, Aramaic, and Persian) literary sources, epigraphic and archaeological evidence, medieval and modern travelogues, and more recent scientific techniques such as dendrochronology and pollen analysis. The book was published in 1982 (after Meiggs had retired from full-time teaching) and so lacks more advanced scientific methods such as DNA analysis or computer-assisted modelling, but Meiggs’s thorough knowledge of the ancient Greek and Latin sources in all their extant forms more than makes up for this. For the study of trees and timber the most important Greek writer is Theophrastus (371-287 B.C.), Aristotle’s heir as head of the Athenian Lyceum and the “father of botany.” The principal Latin writer on ancient trees and timber is Pliny the Elder (A.D. 23-79).

Although some scholars have hypothesized that the climate of the ancient Mediterranean basin was colder and wetter than it is presently and that therefore there were more trees more widely distributed than now, Meiggs cites evidence that the ancient climate and distribution of trees and forests were basically the same as that of the present Mediterranean.

The best sources for the tallest trees were the cedars and junipers of Lebanon, of the Amanus range behind Tarsus and Antioch, and of the Taurus Mountains behind Cilicia. Though there were also cedars on Cyprus (which the Ptolemies of Egypt exploited for their ship-building when the cedars of Lebanon, Amanus, and Taurus came under the control of the Seleucids), as well as some cedars in the Atlas and Aures mountains of the southwest Mediterranean (in the provinces of Mauretania and Africa) to which the Romans eventually gained access. In addition to their great size, cedar and cypress both had a pleasant scent and resisted insects and decay, and were thus highly prized for building.

The cypress trees of Crete, Lycia, and Mount Ida (in ancient Troas) provided a convenient source of large timbers to the neighboring Greek regions of the Aegean, and the main roof-beam of the Parthenon was a large cypress from Crete. Lycia and Caria also had impressive junipers.

According to Theophrastus, the best trees for shipbuilding were the tall silver firs of Macedonia, followed by the firs of the forests behind Sinope on the south coast of the Black Sea, and then by the considerably less desirable pines of Parnassus and Euboea.

Italy was more fully forested than mainland Greece, with some of the most impressive trees the tall firs of the Sila Forest in Calabria in the far southwest. (In the late 6th c. A.D., Pope Gregory the Great specially sent to the Sila Forest for firs long enough to repair the basilicas of St. Peter and St. Paul in Rome.) The Apennine Mountains along the spine of the Italian peninsula were rich in all manner of conifers, and deciduous trees such as elm, chesnut, and oak, and the Tiber basin and its tributaries provided a convenient mode of transporting harvested trees to Rome for both building and fuel. As the Roman Empire expanded, the impressive trees of Corsica and the mountains of Northwest Africa fell under its sway, as did the immense forests of Gaul, Germania, and Britain. Emperor Tiberius brought a massive larch tree from the Alps to repair a burnt-out bridge in Rome. Alpine larch, first encountered by Julius Caesar on a campaign, had a reputation for being semi-resistant to fire.

Throughout “Trees and Timber in the Ancient Mediterranean World” Meiggs is able to draw-out fascinating evidence for the types and sizes of trees used in such varied structures as Solomon’s Temple in Jerusalem, Assyrian palaces in northern Mesopotamia, Demetrius I’s massive siege engine “Helepolis” employed against Rhodes, and Trajan’s bridge across the Danube into Dacia. Meiggs also covers woods often used for furniture (box, citrus, ebony), doors (cypress), and door frames (elm) among others. Broad-leaf deciduous trees such as chesnut and oak were best for coppicing (the practice of cutting trees down to stumps and allowing new shoots to grow, mature, and eventually be harvested themselves) for stakes, posts, fencing, and firewood.

With chapter titles such as “Forests and Fleets,” “Timber for Armies,” “Farms, Parks, and Gardens,” and “Woods for Sculpture,” Meiggs covers all aspects of the distribution and use of trees and timber in the ancient Mediterranean world. His last chapter is titled “Deforestation” and, as a previous reviewer has noted, Meiggs shows that the majority of the Mediterranean basin was well-forested (as in the ancient world) until the late nineteenth century when modern industrial logging thoroughly denuded the still-impressive forests of southern Italy, the Aures Mountains of Algeria and Tunisia, the Taurus range along the southern coast of Turkey, Crete, and Cyprus. The greatly expanding European population levels of this time also exacerbated deforestation as woodlands were cleared to make way for farms and pastures for sheep and goats. This last chapter is fascinating if also depressing.

After the thirteen main chapters Meiggs also includes nine appendices with titles such as “Confusion of Species: Cedar and Juniper; Chesnut and Walnut,” “The Forests of South Italy,” and “Pitch.” Interspersed throughout the book are also helpful illustrations such as cross-sections of the Parthenon’s roof and the 4th c. A.D. St. Peter’s basilica (which utilized a huge quantity of timber in its construction), and examples of tie-beam trusses, the structural innovation that allowed the later Romans to span the main halls of their basilicas with roofs up to eighty feet wide. There are also clear maps of the various regions of the Mediterranean discussed in the text.

This book lived up to my high expectations. If you are interested in its subject, “Trees and Timber in the Ancient Mediterranean World” will provide much stimulating reading.

The collapse of the American dream – This will scare you

Death of the American Dream? – USA

Journeyman Pictures
Published on Oct 13, 2008
October 2008 The financial crisis is hitting middle-class America, as families are forced onto the streets. Some say its the end of the American dream but for others this is a chance to redefine whats important. In California, the credit crunch has had a devastating effect on families that bought expensive houses with no down payment and high interest rates. The houses wont sell and their owners are left with nothing. A growing number of people find refuge in car parks, sleeping in their vehicles until they find another job. This is the flipside of American life. No-one is looking out for you. Craig used to run a successful business but now lives in a borrowed van with his wife and two kids. Despite the setback, he isnt bitter. Life in a car park has made him redefine the American dream for himself. Now he measures abundance in personal happiness rather than material possessions: I’m less encumbered. and I become more pleased with each new step. Barbara is another casualty of the credit crunch. She lost her job as a notary and had nowhere to go. After a few months sleeping in her car, shes found housing again but the experience was an eye-opener: People who are broken by being homeless are dependent on all of their belongings and possessions as their identity. And that isn’t who they are. It seems many more will have to find out for themselves. Produced by SBS/Dateline Distributed by Journeyman Pictures