I’m a scientist. I’m blowing the whistle on the Trump administration. – The Washington Post 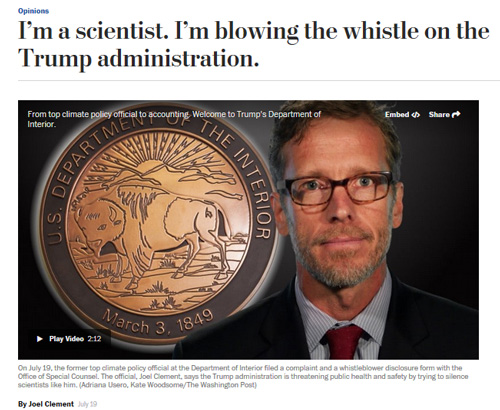 On July 19, the former top climate policy official at the Department of Interior filed a complaint and a whistleblower disclosure form with the Office of Special Counsel. The official, Joel Clement, says the Trump administration is threatening public health and safety by trying to silence scientists like him. (Adriana Usero, Kate Woodsome/The Washington Post)

Joel Clement was director of the Office of Policy Analysis at the U.S. Interior Department until last week. He is now a senior adviser at the department’s Office of Natural Resources Revenue.

I am not a member of the deep state. I am not big government.

I am a scientist, a policy expert, a civil servant and a worried citizen. Reluctantly, as of today, I am also a whistleblower on an administration that chooses silence over science.

Nearly seven years ago, I came to work for the Interior Department, where, among other things, I’ve helped endangered communities in Alaska prepare for and adapt to a changing climate. But on June 15, I was one of about 50 senior department employees who received letters informing us of involuntary reassignments. Citing a need to “improve talent development, mission delivery and collaboration,” the letter informed me that I was reassigned to an unrelated job in the accounting office that collects royalty checks from fossil fuel companies.