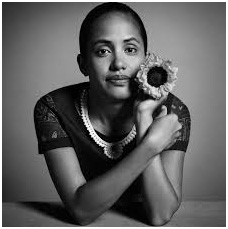 Kathy is a Marshall Islander poet and speaker. She has been selected as one of 13 Climate Warriors by Vogue in 2015 and the Impact Hero of the Year by Earth Company in 2016.

During my recent attendance at the Rhodes Climate 1,5 Intergenerational workshop, I had the good fortune of attending a session with on “Arts and Activism”  conducted by the poet, Kathy Jetñil- Kijiner, showing the importance if the creative arts in alerting people to the realities of climate change.  Kathy has recently published a book of poems, entitled:  Poems from a Marshallese
Daughter

Using poetry and performance art Ms. Jetñil- Kijiner brought the Rhodes scholars to the world of the Marshall Islands and the problems faced by inhabitants of the islands, including the island where she lives, which sits 2 meters (7 feet) above sea level. She showed us impacts of rising sea levels and extreme weather events being experienced by islanders.

Photographs of the island, houses destroyed by the impact of the waves and the description Kathy provided in her poems connected us with the traditions, character and inhabitants of the islands. The changing shoreline, photographs of graves falling into the ocean, and the story of the island that no longer exists brought to life the reality of a world facing the effects of climate change.

Kathy shared poems with us, the first, Dear Matafele Peinam, a poem she used to comfort her baby as the child fell asleep. It is a poem that captures a precious moment where a mother provides a snapshot of the beauty and co-existence of a people, an island and the ocean. This is a poem that Kathy presented to the United Nations Climate Summit in 2014 and which led to her discovery as a world-renowned poet.

The second poem, 2 Degrees spoke of her role in advocating the 1.5 as opposed to a 2.0-degree temperature rise for the United Nations Council of Parties meeting. The poem speaks of the importance to Marshall Islands inhabitants of this .5-degree difference using the analogy of a child with a fever that will become life-threatening unless addressed and treated. Kathy´s message became more determined to gain the listener´s attention as she referenced treating the Marshall Islands and their inhabitants as people to be swept off the table and forgotten in the climate change challenge. Her poetry is strong and brings an enduring impact as it is written and spoken with confidence and care.

Kathy hesitates in calling herself an activist but she should be assured that her message is important and well received by world inhabitants. Kathy´s passion and inspiration is taken further with creation of a youth group, Jo-Jikum, that continues to raise awareness of climate change and how it is affecting the Marshall Islands.

In another poem, Butterfly Thief, she alludes to the criminality of humankind’s role in creating climate change and neglecting to deal with it effectively. This analogy spoke clearly to our group about the need to take concrete action to deal with climate change and not to allow those responsible, all of us, to walk away from the threat to life on earth.

Kathy ended her presentation with an interactive session where she invited Rhodes delegates to share their experiences on a climate change issue. This caused us to reflect and realize that this is not someone else´s problem but a problem in which we each play a part.

One of Kathy´s poems, There’s a Journalist Here, leads me to conclude that I am fortunate to be the Rhodes scholar journalist who can convey to those who read this summary how the climate change forum benefited from inviting Kathy Jetñil-Kijiner, a talented poet and performance artist, to play a part in our forum. She is an artist who has had and will continue to have a significant impact on climate change matters for the Marshall Islands and planet earth.