Climate Scientist, Dr. Michael E. Mann on why Scientists’ voices must be heard

They reached the same conclusion that a world empire is not only pre-determined but close at hand and attempted to estimate the time of its appearance.

Chalmers Johnson argues that the US globe-girding network of hundreds of military bases already represents a global empire in its initial form:

For a major power, prosecution of any war that is not a defense of the homeland usually requires overseas military bases for strategic reasons. After the war is over, it is tempting for the victor to retain such bases and easy to find reasons to do so. Commonly, preparedness for a possible resumption of hostilities will be invoked. Over time, if a nation’s aims become imperial, the bases form the skeleton of an empire.[63]

Kenneth Pomeranz shares Johnson’s view: “With American military bases in over 120 countries, we have hardly seen the end of empire.” This “vast archipelago of US military bases … far exceeds 19th-century British ambitions. Britain’s imperium consisted of specific, albeit numerous, colonies and clients; the American imperial vision is much more global…”[64]

Times Atlas of Empires numbers 70 empires in the world history. Harvard Historian, Niall Ferguson, lists numerous parallels between them and the United States. He concludes: “To those who would still insist on American exceptionalism, the historian of empires can only retort: as exceptional as all the other 69 empires.”[65]

The most unitary form of empire was described by Michael Doyle in his Empires. It is empire in which its two main components—the ruling core and the ruled periphery—merged to form one integrated whole. At this stage the empire as defined ceases to exist and becomes world state. Doyle exemplifies the transformation on the example of the Roman Emperor Caracalla whose legislation in AD 212 extended the Roman citizenship to all inhabitants of the Mediterranean world.[66]

Alexander Wendt in his article “Why the World State is Inevitable…” supposed the pathway of universal conquest and subsequent consolidation provided the conquering power recognizes all conquered members.[67] Replying on criticism, Wendt invoked the example of the Roman Empire: A “world empire would be an unstable equilibrium, still subject to the struggle for recognition.” However, conquest can “produce a proper ‘state’ if, as a result of internal reform, the world empire eventually recognizes all of its members (like the Roman Empire did, for example).”

The Secret Bankers and Alliances That Rule America: How the Elite Transformed the Economy

http://democracynow.org – To mark the 100th day of Donald Trump’s presidency, thousands of climate activists from around the country are converging in Washington, D.C. on Saturday for the People’s Climate March. Already, Trump has threatened to pull the U.S. out of the Paris climate accord, begun dismantling President Obama’s climate legacy and revived the Keystone XL and Dakota Access pipelines. He has also put climate change deniers in charge of several key agencies, including the Environmental Protection Agency, and proposed slashing the budget of the EPA and other climate programs. This comes as scientists have confirmed 2016 was the warmest year on record. Our guest is Bill McKibben, co-founder of 350.org, who helped organize this latest march and notes: “Weekends are for fighting tyranny.” 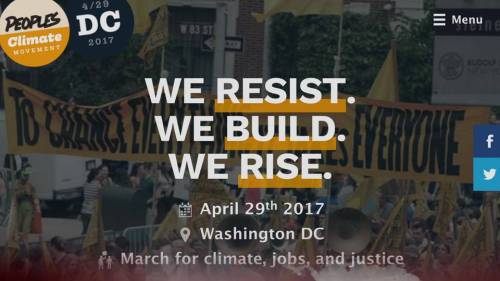 Merkley’s bill came as climate activists from around the country are converging on Washington, D.C. on Saturday for the People’s Climate March. Over the past 100 days Trump has threatened to pull the U.S. out of the Paris climate accord, begun dismantling President Obama’s climate legacy and revived the Keystone XL and Dakota Access pipelines. He has also put climate change deniers in charge of several key agencies, including the Environmental Protection Agency, and proposed slashing the budget of the EPA and other climate programs. Democracy Now! will broadcast five hours of live coverage from the climate march Saturday, beginning at 10 a.m. Eastern Time. You can go to our website at democracynow.org to tune in. And after headlines, we’ll speak with climate activist Bill McKibben.

Senate Bill Would Phase Out Fossil Fuels by 2050

Meanwhile, in Washington, Oregon Senator Jeff Merkley introduced a bill Thursday that would transition the U.S. to 100 percent renewable energy by 2050.

Sen. Jeff Merkley: “Our responsibility is to stop burning fossil fuels and stop putting carbon dioxide into the atmosphere. That’s why we have to rapidly transition from an energy economy based on fossil fuels to one based on clean, renewable energy.”