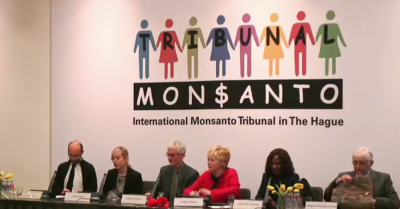 Most opinion tribunals have had a considerable impact, and it is now accepted that they contribute to the progressive development of international law. – International Monsanto Tribunal Advisory Opinion, The Hague, April 18, 2017

On Tuesday, April 18, representatives of the Organic Consumers Association and our Regeneration International project gathered in The Hague, Netherlands, along with members of other civil society groups, scientists and journalists.

We assembled to hear the opinions of the five judges who presided over the International Monsanto Tribunal. After taking six months to review the testimony of 28 witnesses who testified during the two-day citizens’ tribunal held in The Hague last October, the judges were ready to report on their 53-page Advisory Opinion.

The upshot of the judges’ opinion? Monsanto has engaged in practices that have violated the basic human right to a healthy environment, the right to food, the right to health, and the right of scientists to freely conduct indispensable research.