Stop swooning over Justin Trudeau. The man is a disaster for the planet | Bill McKibben | Opinion | The Guardian 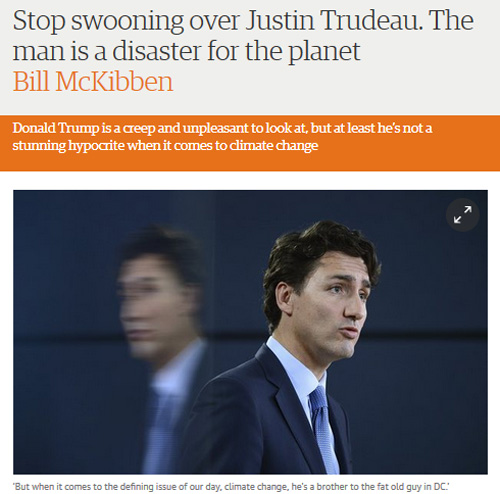 ‘But when it comes to the defining issue of our day, climate change, he’s a brother to the fat old guy in DC.’ Photograph: Sean Kilpatrick/AP

Donald Trump is so spectacularly horrible that it’s hard to look away – especially now that he’s discovered bombs. But precisely because everyone’s staring gape-mouthed in his direction, other world leaders are able to get away with almost anything. Don’t believe me? Look one country north, at Justin Trudeau.

Look all you want, in fact – he sure is cute, the planet’s only sovereign leader who appears to have recently quit a boy band. And he’s mastered so beautifully the politics of inclusion: compassionate to immigrants, insistent on including women at every level of government. Give him great credit where it’s deserved: in lots of ways he’s the anti-Trump, and it’s no wonder Canadians swooned when he took over.

But when it comes to the defining issue of our day, climate change, he’s a brother to the old orange guy in Washington.

Not rhetorically: Trudeau says all the right things, over and over. He’s got no Scott Pruitts in his cabinet: everyone who works for him says the right things. Indeed, they specialize in getting others to say them too – it was Canadian diplomats, and the country’s environment minister, Catherine McKenna, who pushed at the Paris climate talks for a tougher-than-expected goal: holding the planet’s rise in temperature to 1.5C (2.7F).

But those words are meaningless if you keep digging up more carbon and selling it to people to burn, and that’s exactly what Trudeau is doing. He’s hard at work pushing for new pipelines through Canada and the US to carry yet more oil out of Alberta’s tar sands, which is one of the greatest climate disasters on the planet.

Institute for New Economic Thinking at the Oxford Martin School

In the wake of the 2008 global financial crisis, and with society facing challenges ranging from growing economic inequality to the threat of climate change, we need new insights into how the economy really works, and how it might be made to work better.

For much of the twentieth century economics was dominated by ideas that humans are perfectly rational, markets are perfectly efficient, institutions are optimally designed, and that market economies tend to self-correct, finding an equilibrium that delivers the best social outcome.

New economic thinking takes a more realistic view that embraces the messy reality of the economy. It sees the economy as a dynamic, complex, evolving, network of interacting, heterogeneous individuals and institutions who who don’t always behave rationally and have limited information, but nonetheless learn, are innovative, and evolve over time. In the real world, economies may sometimes self-correct, but they may also be prone to instabilities, or become trapped in dysfunctional states. The economy has more in common with complex systems such as biological ecosystems, the brain, or the internet, than it does with the simple mechanical neoclassical models used in much traditional economic theory.

Understanding the economy in this way requires economists to break-out of their disciplinary silo and embrace new tools from a range of fields including computer science, physics, mathematics, biology, ecology, psychology, sociology, anthropology, political science, and philosophy. It requires both quantitative and non-quantitative analyses, a deep appreciation of economic history, and a strong orientation towards data to re-ground economics as an empirical science.

Why do we need new ideas in economics?

Since the financial crisis, there’s been a growing feeling that we need new economic thinking and innovative ideas to help give us a deeper understanding of how the economy works. We think that better economic thinking can help lead to better decisions and have a better impact on society says Eric Beinhocker.

Noam Chomsky – How to Deal with the Trump Presidency

Chomsky goes through some of the crimes of the post-war presidents. From 2003.

Chomsky: Today’s GOP is a Candidate for Most Dangerous Organization in Human History

http://democracynow.org – In Part 2 of our wide-ranging conversation with the world-renowned dissident Noam Chomsky, we talk about the conflict in Syria, the rise of ISIS, Saudi Arabia, the political crisis in Brazil, the passing of the pioneering lawyer Michael Ratner, the U.S. relationship with Cuba, Obama’s visit to Hiroshima and today’s Republican Party. “If we were honest, we would say something that sounds utterly shocking and no doubt will be taken out of context and lead to hysteria on the part of the usual suspects,” Chomsky says, “but the fact of the matter is that today’s Republican Party qualify as candidates for the most dangerous organization in human history. Literally.”