Noam Chomsky: If Trump Falters with Supporters, Don’t Put ‘Aside the Possibility’ of a ‘Staged or Alleged Terrorist Attack’ | Alternet 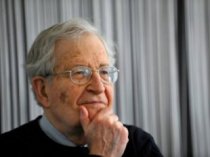 Chomsky warns of scapegoating vulnerable people: “That can turn out to be very ugly.”
By Jan Frel / AlterNet
March 27, 2017

It’s March 2017, and the political process and the media in the U.S. are a depressing mess, on top of an ever-growing pile of issues that are not remotely being addressed, much less resolved by society: inequality, climate change, a global refugee crisis, you name it.

Donald Trump presents a new problem on top of the old familiar ones; a toxic multifront political disaster whose presence in the White House is doing damage to the national psyche on a daily basis. But in the first few months of his presidency it appears he is unwilling or unable to carry out almost any of the campaign promises he made to his base. Repealing Obamacare was supposed to be a cinch — well, that was a total disaster for Trump and the Republican party; the first big legislative rollout of his presidency, and it didn’t even make it to a vote. What about canceling TPP? Trump did do that, right?

In a recent interview with the renowned intellectual and public commentator Noam Chomsky, he told me TPP was dead on arrival regardless of who was elected. What about scrapping NAFTA? Chomsky said he was doubtful Trump would be able to do much there either. What Trump appears to be doing, Chomsky observed, is ramming through the standard GOP wish list: tax cuts, corporate welfare, climate change denial. How would Trump’s voters react to that? What we need to worry about, Chomsky says, is the potential for the Trump administration to capitalize on a “staged or alleged” terrorist attack. The text of our interview follows.

Jan Frel: Do you observe any meaningful signs of the key power factions in Washington aligning against Trump?

Noam Chomsky: Well, the so-called Freedom Caucus, which is a Tea Party outgrowth, has been refusing, so far, to go along with the health plan that he has advocated. There are other indications of the Tea Party-style far-right, separating themselves from Trump’s proposals.

On the other hand, if you take a look at what is actually happening in Washington, apart from the rhetoric and what appears in Sean Spicer’s press conferences and so on, the old Republican establishment is pretty much pushing through the kinds of programs that they have always wanted. And now they have a kind of open door that is Trump’s cabinet, which draws from the most reactionary parts of the establishment. It doesn’t have much to do with Trump’s rhetoric. His rhetoric is about helping the working man and so on, but the proposals are savage and damaging to the constituency that thinks that Trump is their spokesperson.