Trump federal budget 2018: Massive cuts to the arts, science and the poor – The Washington Post 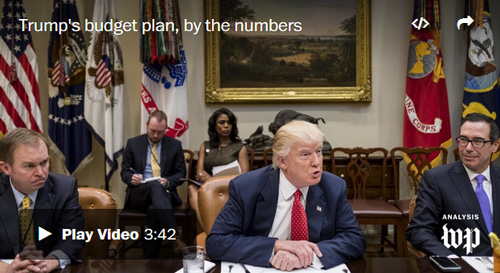 President Trump just released his budget plan for the next fiscal year, which proposes some big changes in government spending. Here’s a look at what agencies are helped and hurt by the proposal. (Jenny Starrs/The Washington Post)
By Damian Paletta and Steven Mufson March 16 at 12:01 AM

President Trump on Thursday will unveil a budget plan that calls for a sharp increase in military spending and stark cuts across much of the rest of the government including the elimination of dozens of long-standing federal programs that assist the poor, fund scientific research and aid America’s allies abroad.

Trump’s first budget proposal, which he named “America First: A Budget Blueprint to Make America Great Again,” would increase defense spending by $54 billion and then offset that by stripping money from more than 18 other agencies. Some would be hit particularly hard, with reductions of more than 20 percent at the Agriculture, Labor and State departments and of more than 30 percent at the Environmental Protection Agency.