The Pruitt Emails: E.P.A. Chief Was Arm in Arm With Industry – The New York Times 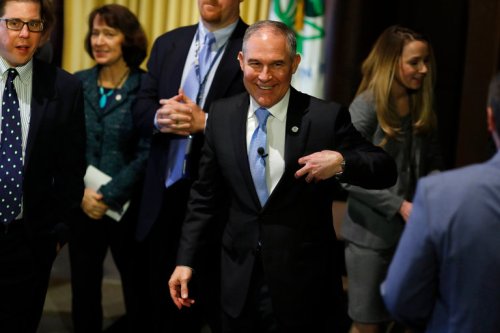 WASHINGTON — As Oklahoma’s attorney general, Scott Pruitt, now the Environmental Protection Agency administrator, closely coordinated with major oil and gas producers, electric utilities and political groups with ties to the libertarian billionaire brothers Charles G. and David H. Koch to roll back environmental regulations, according to over 6,000 pages of emails made public on Wednesday.

The publication of the correspondence comes just days after Mr. Pruitt was sworn in to run the E.P.A., which is charged with reining in pollution and regulating public health. Senate Democrats tried last week to postpone a final vote until the emails could be made public, but Republicans beat back the delay and approved his confirmation on Friday largely along party lines.

The impolitic tone of many of the emails cast light on why Republicans were so eager to beat the release. And although the contents of the emails were broadly revealed in The New York Times in 2014, the totality of the correspondences captures just how much at war Mr. Pruitt was with the E.P.A. and how cozy he was with the industries that he is now charged with policing.