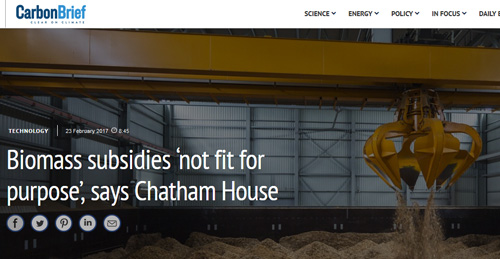 Subsidies should end for many types of biomass, a new Chatham House report argues, because they are failing to help cut greenhouse gas emissions.

The report adds that policymakers should tighten up accounting rules to ensure the full extent of biomass emissions are included.

The analysis outlines how policies intended to boost the use of biomass are in many cases “not fit for purpose” because they are inadvertently increasing emissions by often ignoring emissions from burning wood in power stations and failing to account for changes in forest carbon stocks.

It argues that UK and recently revised EU rules for bioenergy are inadequate for managing and monitoring the emissions from burning biomass.

Carbon Brief examines the main arguments of the report, which cut through the long-running debate about the climate impacts of burning biomass.

The rising demand for renewable power around the world has led to a large increase in the production and burning of wood pellets. Advocates, such as power firm Drax – the UK’s largest biomass user – argue they are more reliable for providing baseload power than other renewables, such as wind or solar.

Worldwide production hit a record 28 million tonnes (Mt) in 2015, according to the UN Food and Agriculture Organisation (FAO), up from under 20Mt just three years earlier. Meanwhile, the UK has become the world’s largest importer of wood pellets, burning 42% of the 15.5Mt of total global imports in 2015.