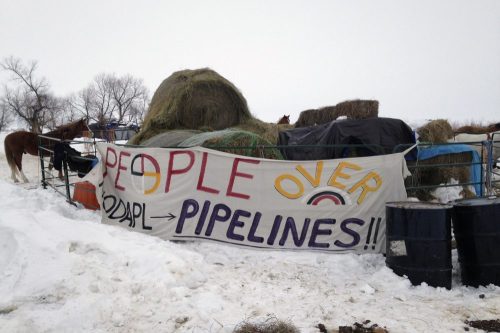 Hay is stacked up to feed horses at a protest encampment along the route of the Dakota Access oil pipeline near Cannon Ball in southern North Dakota. (James MacPherson/AP)

January 25, 2017
Yesterday, as one of his first ten executive actions, President Trump made good on one of his campaign promises and signed actions that reopen the way for approval of the Keystone XL and Dakota Access oil pipelines. The oil industry and its supporters are cheering the move. Opponents – environmentalists, Native Americans, landowners, many who fought to block construction of the pipelines – say they will continue to fight. Lynda Mapes from the Seattle Times and Michael Brune, executive director of the Sierra Club, join us to explore the meaning of the order.

“The important thing to recognize here is what didn’t happen,” Mapes told us. “You can’t do government by Twitter. The thing about what happened yesterday is it means nothing and everything.”

The executive order issued yesterday was a memorandum to the U.S. Army Corps of Engineers, with three specific options — an expedition of the Dakota Access Pipeline plan review process, the rescinding of the order to conduct an environmental review of the plan or the issue of the easement to continue the final segment of the pipeline construction, Mapes said.

“There are crews standing by in hotel rooms to get a green light and get going,” Mapes said. “But even if the pipeline is completed, a court can intervene to stop the flow of oil.”

And the controversial Keystone XL Pipeline could also be expedited under the new executive order.

“There’s that much that the President can do in the short term to make this pipeline a reality, but his action yesterday made clear his willingness to put this back on the table,” Brune told us. “He has indicated a willingness to have this pipeline be built. There’s no specific route that has been outlined to allow the pipeline to be built in Nebraska.”

Still, neither pipeline is a guaranteed done deal, quite yet. Mapes brought up the market conditions for crude oil prices that might not necessarily support the need for both massive pipeline projects.

“Opposition on the ground is still very serious,” Mapes said.